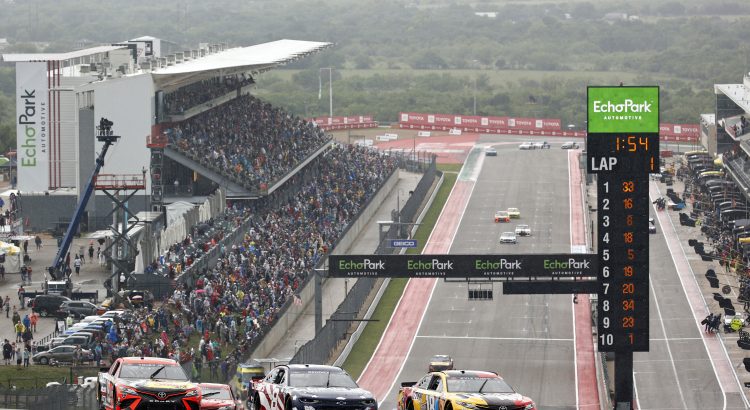 The mess in Atlanta is over and FINALLY the Cup Series will get to compete at a track that should be easier to predict. The Cup Series will return to Austin, Texas this week to compete at the Circuit of the Americas (COTA). We did not know how the Gen-7 car would perform on a Superspeedway, an intermediate track and a flat track, but we should know what to expect at COTA. This race Sunday will be decided by the driver’s ability to navigate this tricky road course and it is not so much about the car. I am worried about the drivers figuring out the sequential five speed transmission, but at least they have a practice session to figure it out (I will downgrade Denny Hamlin though. He seems to have a problem differentiating between up and down and right and left…LOL).  The Cup Series will have practice and qualifying Saturday and then race Sunday. The Fantasy NASCAR picks will be posted Saturday night.

The inaugural race at COTA last year was a disaster. The Cup Series tried to complete the race in a torrential downpour but the event was shortened from 68 laps to 54. Kevin Harvick said after the race, “This was the most dangerous racing in my life. I could not see anything out my windshield. Clearly NASCAR does not care about our safety.” The weather is looking 100% better this weekend than it was last year. Clear skies and a hot, slick track should allow the Cup Series to put on the show that the fans were expecting last year.

So how do we handicap this race? First off all… I will be throwing away all of the data from the first race at COTA. I will be focusing more on the drivers who have a history of running well on the road course. The problem is… the list grows each season. But there are still about 12 drivers who are clearly the class of the field. These are the drivers I will be building my Fantasy NASCAR lineups around this week.

Here are my Driver Rankings for the Echopark Texas Grand Prix…