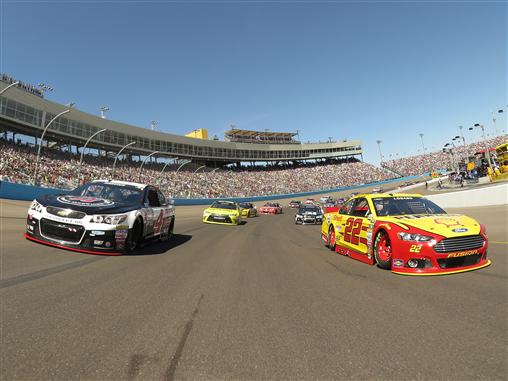 The Monster Energy NASCAR Cup Series will compete at IMS Raceway (I will just call it Phoenix) for the Ticket Guardian 500(k). The race can be seen Sunday at 3:30 p.m. ET on Fox.

The key for the teams at Phoenix will be to mange tire falloff. This is a very heat sensitive track and the temperatures can be either very hot or sometimes cool. When the track is hot it gets slick. The teams will do their best to get a setup which provides the most grip possible.

The Fords have dominated the early part of the season and I see no reason why that will change at Phoenix. Kevin Harvick, Joey Logano and Brad Keselowski should all run well this week. Chase Elliott, Kyle Busch and Denny Hamlin will be the best non-Ford drivers in the field Sunday. My strategy in many of my teams will continue to focus on the Fords until the other manufacturers catch up.

Kevin Harvick has to be on every team this week. The No. 4 car has dominated the last two races (led 395 laps and won both races) and now the series competes at a track where Harvick has led 1,167 laps and won 6 races since it was reconfigured in 2011. There is a good chance that Harvick dominates this race the same way he has dominated the last two. It is too risky to leave him off your team.

Joey Logano has run well at Phoenix and he is off to a good start in 2018. The No. 22 team was horrible last year but they are a completely different team this season. Logano is the only driver to finish every race in the top 10. He won at Phoenix in 2016 and he won the pole and led 82 laps before crashing last year. The Fords have been running well and that means Logano should be up front Sunday.

Kyle Busch has been just as good as Kevin Harvick at Phoenix in the last four races at the track. He has a series-best driver ranking (tied with Harvick) and a series-best average finishing position of 4th (tied with Harvick).   Busch dominated this race last year. He qualified 9th and quickly made his way to the front. He led 114 laps on his way to a 3rd-place finish. Busch should be the biggest threat to Harvick this week.

Denny Hamlin could easily be the defending race winner at Phoenix. He was running up front last year when Chase Elliott decided to repay him for some shenanigans the two of them had at Martinsville. Hamlin led 193 laps in the race and had the most dominant car. I expect the No. 11 team to show up with a hot rod this week and easily finish in the top 10.

Chase Elliott has one of his best races of his best races of his career at Phoenix in November. He was leading the race with 9 laps to go when he was passed for the lead and finished 2nd. Elliott has a 7.75 average finishing position in his 4 races at Phoenix. It is hard to trust the Chevy’s right now, but Elliott does not seem to be as slow as his Hendrick Motorsports teammates.

Kyle Larson is likely to be my Garage Driver this week. He finished 2nd in this race last year and was running up front in November when his engine expired. Larson has been running very well this season. I expect his Chip Ganassi Racing Chevy to be faster later in the season so I will start him in the garage this week. If he runs as well as he has in the last three races at Phoenix, I will not hesitate to use him in the race.

Finally my Fantrax Bronze Point Salary Cap picks performed as well as expected. Kevin Harvick, Martin Truex Jr., Brad Keselowski, Ryan Blaney, Kyle Larson, Erik Jones, Paul Menard and Aric Almirola all finished in the top 10. Whenever you can have 8 of your 10 drivers finish in the top 10, you know it is a good week. My team scored 328 points and now I sit 2nd in my league standings. It is time to keep building on this performance at Phoenix.

I am still debating if I should sell Jimmie Johnson. I will be watching Denny Hamlin and Joey Logano in practice. If they run as well as they have in recent races at Phoenix, I will trade Johnson for one of these drivers.