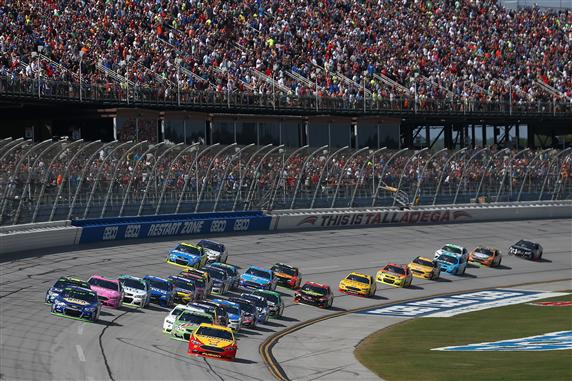 This is the week the 12 playoff drivers having been fearing… a trip to Talladega Superspeedway with their season on the line. Some drivers are better at restrictor-plate racing than others, but ultimately their fate is in the hands of the NASCAR Gods. You can see who is able to survive “The Big One” and make their way to Victory Lane in the 1000Bulbs.com 500 Sunday at 2pm ET on NBC.

NASCAR likes a reduced weekend race schedule and that is what they have this week. The MENCS will only have one practice this week. The first and final practice will be Saturday at 10am ET on NBC Sports Network. Garage Talk Notes will not be posted this week because practice at the Superspeedways is meaningless and the information will not help your fantasy teams. Qualifying for the MENCS will be Saturday at 3:30pm ET on NBC Sports Network.

The MENCS last competed at Talladega in April. Kevin Harvick won the pole and led the first 12 laps. Brad Keselowski led 21 and won Stage 1 but was taken out in a wreck with 22 laps to go. The Fords took the top 6 spots in Stage 2, led by Paul Menard. It was his only Stage win of the year. Joey Logano led the most laps (70) and took home the checkered-flag. The Fords took 6 of the top 7 spots in the race.

The people who have been following my DraftKings picks for a while know that I have the most success at the restrictor-plate races. It is not very hard to select a winning lineup in these races but most people do not have the guts to do it. You MUST select at least 5 drivers who start outside the top 20 and most likely outside the top 25. Do not worry about their names on the windshield. David Ragan starting 28th has just as good of a chance of winning as Brad Keselowski starting on the pole.

Also, do not be afraid to leave a LOT of salary on the table this week. I often leave over $1K off my team because I do not need the top drivers in this race. I need the drivers who start in the back who have some history of running well at the Superspeedways.

There are only 188 laps in the race Sunday. That means there are 47 points available for leading laps and 94 points available for fastest laps. The trend at Talladega is to have 6 drivers lead most of the laps and the fastest laps are spread throughout the field. Even Jeffrey Earnhardt will score fastest laps Sunday because the back of the pack usually gets pulled along in the draft. We do not need dominators this week because the driver who leads the most laps will likely score 10 or less bonus points. It is a lot easier to score the place differential points at Talladega.

Thanks a lot Jimmie Johnson!! I was in shock when his car broke down before the race even started. I have been to all of the NASCAR Team Shops around Concord, North Carolina and I cannot imagine how a car from Hendrick Motorsports could have problems before the race begins. HMS is the Taj Mahal of NASCAR. It looks like they must have over 500 people working on this car. To make a mistake like that is inexcusable. My theory of using a non-Playoff Driver in the Garage because the Playoff Drivers are less likely to have problems really paid off last week.

I plan to select two drivers from Team Penske Racing for my Playoff Driver spots this week. Brad Keselowski and Joey Logano have won 6 of the last 8 races at Talladega. Logano won the race in April and Keselowski won the playoff race last year. Logano has won half of the races at the track since 2015 and Keselowski has five trips to Victory Lane at the World’s Fastest Superspeedway. These two drivers should be the best picks in the field Sunday.

It is going to be hard to use our Garage Driver this week. The trend at Talladega since Stage Racing was introduced was for the first two Stages to be calm and all heck breaks loose at the end of the race. We need to decide if we are going to use our Garage driver before the end of Stage 2 so a late race wreck will likely kill our team.

I plan to use Ryan Newman as my Garage Driver. I want one of the safest picks in field and that happens to be Mr. Newman. He has finished 8th, 9th, 8th, 6th, 11th, 2nd and 5th in his last 7 restrictor-plate races. He ranks #2 (behind Aric Almirola) in avoiding wrecks on the Superspeedways since 2014. My luck with Newman on my Fantasy teams sucks but I am a numbers guy and the stats say…”Play Newman this week.”

There are only 6 races left in the season and we are running out of time to make it to the top of our league standings. The race at Talladega comes down to luck more than skill so hopefully we will get lucky and all of our drivers will avoid the wrecks Sunday. If you were ever going to take a chance with some drivers the other people in your league might not be using, this is the week to do it.