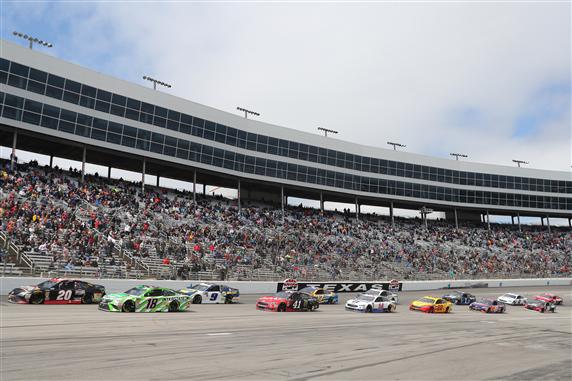 Three races remain in the 2018 MENCS season and things just got interesting. Joey Logano won at Martinsville so his spot in the championship race is secure. Kyle Busch, Martin Truex Jr. and Kevin Harvick are all 25 points above the cut line. This leaves Kurt Busch, Clint Bowyer, Chase Elliott and Aric Almirola almost in a “must win” situation. Can one of these outsiders beat the “Big Three” to Victory Lane Sunday? The race can be seen Sunday at 3pm ET on NBC Sports Network.

The MENCS will be back to a normal schedule this week. There will be one practice Friday (2pm ET on NBCSN) and two practices Saturday (12:30pm on CNBC and 3pm ET on NBCSN). Qualifying will be Friday evening at 7pm ET on NBCSN.

The MENCS last competed at Texas in April. Kurt Busch won the pole. It was his second consecutive pole at Texas Motor Speedway. He lost the lead to his teammate, Kevin Harvick on the first lap of the race. Harvick went on to win Stage 1, led 87 laps and finished second. Martin Truex Jr. ran second for all of Stage 1 but blew a tire on lap 80 and it ended his day. Kyle Busch took the lead to start Stage 2 and it was game over after that. Busch won Stage 2, led 116 laps and went onto Victory Lane for third time in the MENCS.

Teams had a lot of problems with the front right tires blowing up in the April race at Texas. Brad Keselowski, Denny Hamlin, Jimmie Johnson, Kyle Larson and Martin Truex Jr. all had problems in the race. Goodyear thinks they figured out the problems with the tires so it should not be an issue Sunday. I sure hope so!

Everything is bigger in Texas. That includes the races. The MENCS always runs 500 mile races at Texas, instead of the traditional 400. That means there will be 67 additional laps Sunday. This is important in DFS because it makes the dominators a lot more important.

There are 334 laps in the race this week (too many in my opinion) and that means there will be 83.5 points available for leading laps and 167 points available for fastest laps. The trend at Texas is for one driver to lead 120 laps, another to lead 80 and a third leads 60. These three drivers usually score 60% of the fastest laps. That is a large chunk of the dominator points going to three drivers. We must try to get at least two of these three dominators into our lineups Sunday.

The drivers I expect to be the top dominators this week include: Kyle Busch, Martin Truex Jr., Kevin Harvick, Kurt Busch and Joey Logano

The drivers who could be the top value picks (between $9k – $7K) for the race Sunday include: Ryan Blaney, Erik Jones, Austin Dillon and Jamie McMurray

The drivers I expect to be the best cheap drivers (below $7K) for the race Sunday include: Trevor Bayne, Chris Buescher, William Byron and Ty Dillon

My Fantasy Live picks keep rolling along. Currently my picks are beating 98% of the competition after beating 100% of the competition in the regular season. We could have done a lot better last week if Clint Bowyer would not have spun out with 5 laps to go. We still have 3 weeks to get to the top 100% and that will be one heck of an accomplishment for the 2018 season.

My two Playoff Drivers will likely be Kyle Busch and Kevin Harvick. These two drivers have won 6 of the 9 races on the 1.5-mile tracks this season. They have also the last two races at the track. Joey Logano winning last week at Martinsville changed the landscape of the playoffs. The “Big Three” are not as safe as they would be if one of them would have won last week. If a driver below the cutline wins Sunday, the “Big Three” are in trouble because only two of the three will get into the championship race. Busch and Harvick will do everything they can to get the win so they can relax next week.

My two Non-Playoff Drivers are likely to be Ryan Blaney and Erik Jones. Blaney has been really good on the 1.5-mile tracks this season. He has the 5th-best driver rating and his average running position is 8.9. That means he should score a lot of Stage points Sunday. Blaney finished 5th in the first race at Texas this season and he will have a great chance for another top-five finish Sunday.

Erik Jones had one of his best races of the season in the April race at Texas. He qualified 21st and quickly made his way to the front. Jones led 64 laps, scored 14 Stage points and finished 4th. If you take away his flat tire at Las Vegas, Jones has an 8.25 average finishing position on the 1.5-mile tracks this season. If Jones looks fast in practice and qualifies up front, he will be in my lineup at Texas.

I trust Kyle Busch and Kevin Harvick to run up front, score Stage points and finish in the top five. There is no reason to waste the Garage Driver pick on a Playoff Driver. I will use Brad Keselowski in the Garage this week. Keselowski won at Las Vegas in September and he should run up front Sunday. His average starting position is 7th and his average finishing position is 8th on the 1.5-mile tracks this season. He may even find a way into my starting lineup if he qualifies well Friday.

There are only 3 races left in the season and we are running out of time to make it to the top of our league standings. The race last week was good but not great for my picks. I started the race in 2nd place in my league and I am still in second place. I did gain some ground on the leader so I will take that as a win. We really need 3 great races to finish the season and I will do my best to make sure that happens.