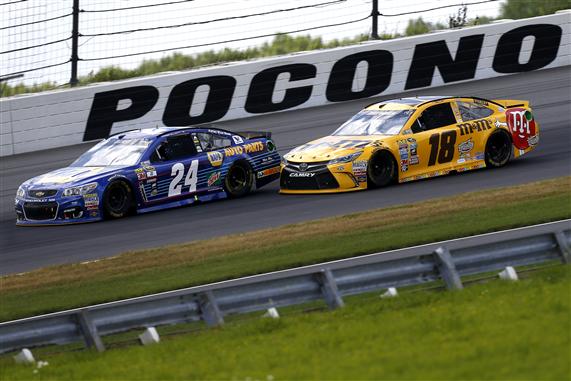 The Monster Energy NASCAR Cup Series travels to Long Pond, Pennsylvania this week for the Axalta Presents the Pocono 400. The race can be seen Sunday at 3 p.m. ET on Fox Sports 1. Be sure to test your knowledge of NASCAR by competing in the Fox Sports Fantasy Auto Racing game.

Pocono is unlike any other track on the Monster Energy NASCAR Cup Series schedule. It is known as the “Tricky Triangle” because of its shape and three distinct turns. Setting up a car for Pocono is difficult because it is almost impossible to get the car to turn freely through all three corners. The driver’s ability to figure out where to shift and brake in the corners is more important than the setup of the car this week.

The best way to select your drivers for Pocono is to look at the drivers with the best track history. Pocono is a hard track to figure out. Drivers who have solved the Tricky Triangle should be fast again this week. Six drivers have a driver rating over 100 in the last four races at Pocono. These drivers include Joey Logano (105.9), Matt Kenseth (105.6), Kurt Busch (104.5), Chase Elliott (102.8), Dale Earnhardt Jr. (102.1) and Kevin Harvick (102.1).

Track position will not be important this week. Drivers can make their way through the field if they have a fast car that qualified poorly. The scoring system for the Fox Sports Fantasy Auto Racing game rewards drivers who improve their position in the race more than the drivers who lead the most laps. Fantasy teams will need to select drivers who start outside the top 10 Sunday. These drivers will have the best chance to score position differential points this week.

Martin Truex Jr. ($10,400) is the best driver in the sport right now. He leads the Monster Energy NASCAR Cup Series point standings and he has finished nine of the 13 races in the top 10. Truex has not finished outside the top three in the last month. The No. 78 car will be fast again Sunday. Truex won this race in 2015 and he is performing a lot better this year. Truex is my pick to go to Victory Lane Sunday.

Kyle Larson ($13,200) is expensive this week but his results on the track justify his price. Larson has finished six of the 13 races this season in the top five. The Chip Ganassi Racing Chevys have had a lot of speed this season. Larson should be able to keep the No. 42 car upfront Sunday. He has finished every race he has started at Pocono is the top 12. Larson is one of the safest picks in the field this week.

Kevin Harvick ($11,300) is still looking for his first win of the season. This could be the week the No. 4 car is in Victory Lane. Harvick has finished three of the last five races at Pocono in the top five. Stewart-Haas Racing always runs well at this track and the switch to Ford should make them even more competitive. Harvick has led laps in five consecutive races at Pocono. He should be leading some more Sunday.

Brad Keselowski ($10,800) has had a lot of bad luck lately but a trip to the Tricky Triangle should fix his problems. Keselowski was the best driver at Pocono in 2016. He finished third in the June race and second in the August race last year. Races at Pocono often come down to fuel strategy and no team is better than Team Penske Racing. I expect Keselowski to be up front at the end of the race Sunday.

Matt Kenseth ($9,100) will be a factor in the race this week. The veteran driver knows how to turn fast laps at Pocono. He won at the Tricky Triangle in 2015 and finished seventh in this race last year. Kenseth is still looking for his first win this season. He will have a good chance to finish upfront Sunday.

Kurt Busch ($8,400) won the Daytona 500 and he has been up and down ever since. Pocono is one of the best tracks for Busch. He has three wins at Pocono, including a trip to Victory Lane in this race last year.  Busch has finished four of the last seven races at the track in the top five. The No. 41 car should easily finish in the top 10 this week.

Ty Dillon ($7,200) had a brilliant race last week at Dover. The No. 13 team gambled in the pits and almost won the race. That seems to be a common theme from the Richard Childress Racing cars and their affiliate teams. Dillon may need to gamble to win the race Sunday, but he should be fast enough to finish in the top 20. Dillon finished 18th and 21st in his first two races at the track.

Dale Earnhardt Jr. ($7,000) has not had a lot of success this year but his performance on the track is starting to improve. Earnhardt finished 10th at Charlotte and 11th last week at Dover. Now he gets to race at his best track. Earnhardt has a series-best 5.6 average finishing position and the fifth-best driver rating in the last four races at Pocono. His price does not match his value this week. Earnhardt is an excellent pick this week.

Ryan Blaney ($6,900) has consistently run up front this year. The No. 21 car has the horsepower to outrun the competition and that is what you need at Pocono. Blaney finished both of his races at the track in the top 11 last year. He is one of the best value picks in the game this week.

Erik Jones ($6,600) talent exceeds his price in the Fox Fantasy Auto Racing game. The No. 77 car consistently runs in the top 10 but he is one of the cheapest drivers in the game. Fantasy teams need to continue to use him until his price changes. Jones does not have any experience in Cup Series car at Pocono but that has not mattered at any other tracks this season.

Here are my pre-qualifying picks for the Pocono 400: