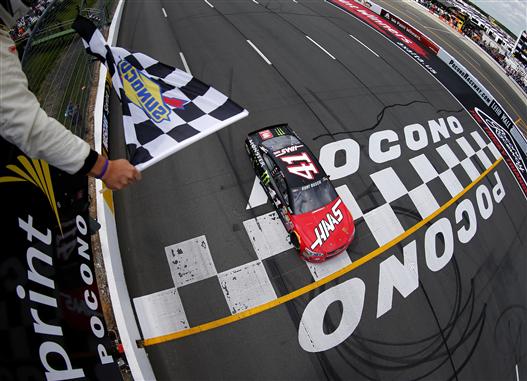 The Monster Energy NASCAR Cup Series travels to Long Pond, Pennsylvania this week for the Pocono 400. The race can be seen Sunday at 3 p.m. ET on Fox Sports 1. Be sure to test your fantasy NASCAR skills in the Yahoo Fantasy Auto Racing game.

Pocono often produces first time winners. Last year Chris Buescher won the race. The weather has a lot to do with the reason why the top drivers often finish in the middle of the pack at Pocono. This track has more races to halfway because of rain than any other track on the circuit. There is rain in the forecast for Saturday but Sunday it should be clear (but that can change quickly).

All of the drivers from Group A have had some success at Pocono. There are six drivers I would consider this week from this group.

Martin Truex Jr. seems unstoppable right now. He should be the favorite to win Sunday. I am keeping him off my team because I am running low on allocations with the No. 78 car. If you have 7 or more allocations left with Truex I would use him over Kevin Harvick.

Brad Keselowski and Joey Logano have the best recent stats at Pocono. There is no way I can use Logano right now because the No. 22 team seems lost. Keselowski is an excellent choice to win the race Sunday.

Jimmie Johnson does not have the best stats at Pocono but he has never had to run well here. Pocono is not a track in the Playoffs and Johnson usually had a win before the Cup Series competed at the track. This year the No. 48 car must run well in order to score Stage points. I expect Johnson to be one of the drivers to beat Sunday.

Matt Kenseth always runs well at Pocono and he is on a hot streak right now. Kenseth is my No. 1 driver for people who want to save an allocation with one of the more popular drivers this week.

Keselowski has had a lot of bad luck lately but a trip to the Tricky Triangle should fix his problems. Keselowski was the best driver at Pocono in 2016. He finished third in the June race and second in the August race last year. Races at Pocono often come down to fuel strategy and no team is better than Team Penske Racing. I expect Keselowski to be up front at the end of the race Sunday.

Harvick is still looking for his first win of the season. This could be the week the No. 4 car is in Victory Lane. Harvick has finished three of the last five races at Pocono in the top five. Stewart-Haas Racing always runs well at this track and the switch to Ford should make them even more competitive. Harvick has led laps in five consecutive races at Pocono. He should be leading some more Sunday.

Kyle Larson is by far the best pick in Group B this week. I cannot use him on my team because I am down to four allocations with the No. 42 car. I know I will use two of them at the races at Michigan and one for Homestead. It is hard to keep Larson off my team but I need to do it this week.

Jamie McMurray has been the second-best driver in Group B in the last seven races. His average finishing position is 7.7. McMurray has not finished a race outside the top 12 since Martinsville (8 races ago). If you have 7 allocations left with McMurray I would use one this week over Ryan Newman.

I switched my pick last week from Chase Elliott to Clint Bowyer and it backfired on me. Bowyer was running 4th when his car got an oil leak. It just seems as though last minute changes never work out. At least I saved an allocation with Elliott.

Last year Elliott ran up front in both races at Pocono. He finished 4th in his first race and was running 5th in August when he was caught on pit road when the rain started. Elliott has had some bad luck this season. Hopefully a solid run last week at Dover will carry over into the race at Pocono.

Pocono is one of the best tracks for Busch. He has three wins at Pocono, including a trip to Victory Lane in this race last year.  Busch has finished four of the last seven races at the track in the top five. The No. 41 car should easily finish in the top 10 this week.

Blaney has consistently run up front this year. The No. 21 car has the horsepower to outrun the competition and that is what you need at Pocono. Blaney finished both of his races at the track in the top 11 last year. He should be a good pick to qualify up front and it would not surprise me if Blaney won his first race this week. The No. 21 car has been that strong this year.

The last pick for Group B came down to Austin Dillon and Newman. Really it is a tossup. Both drivers have similar stats at Pocono and both have similar performances this year. I went with Newman because of experience. He has finished 14 of his 30 starts at Pocono in the top 10. Newman is also good at qualifying on the Tricky Triangle.

I am really not sure who I will use in Group C this week. This is the perfect race to save an allocation with Erik Jones and Daniel Suarez but the options are limited. Ty Dillon will for sure be one of the picks, but who will be the driver I pair with him? That is the question I must answer.

Regan Smith will not be an option this week. The Camping World truck Series competes at Texas this week and Smith is a fulltime driver in that series. Richard Petty Motorsports has not announced a driver yet. I heard rumors it could be Brian Vickers or one of the drivers from the Xfinity Series race Saturday. If it is a veteran driver I will probably use him for my team over Erik Jones.

Dillon will most likely be the driver I use in the race Sunday. Last week he led more laps at Dover than any driver has in the No. 13 car for Germaine Motorsports. Dillon has competed in two races at Pocono in the Monster Energy NASCAR Cup Series. H finished 18th in his first race and 21st in the second. Dillon should finish inside the top 15 Sunday.