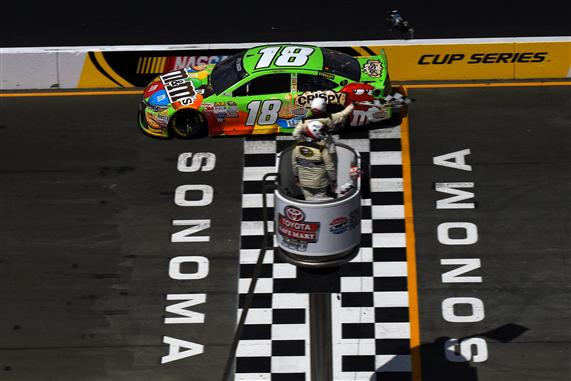 The Monster Energy NASCAR Cup Series travels to Sonoma, California this week for the Toyota / Save Mart 350. The race can be seen Sunday at 3 p.m. ET on Fox Sports 1. Be sure to test your knowledge of NASCAR by competing in the Fox Sports Fantasy Auto Racing game.

The race at Sonoma will be the first trip to a road course for the Monster Energy NASCAR Cup Series. There are two road courses on the circuit (Sonoma and Watkins Glen). Sonoma is more technical because it requires the drivers to shift, accelerate and brake through the 12 turns on the track. The drivers who can flawlessly navigate this course will make their way to the front Sunday.

Having a fast car is always important in NASCAR but having a savvy crew chief will be the key to winning the race this week. The Toyota / Save Mart 350 always come down to fuel strategy. The crew chief that can come up with the best way to conserve fuel and make the least amount of pit stops will have the best chance to celebrate in Victory Lane this week.

Since pit strategy will be a key factor in the race, track position will not be important this week. Teams can gain track position by short pitting or staying out while saving fuel.

The scoring system for the Fox Sports Fantasy Auto Racing game rewards drivers who improve their position in the race more than the drivers who lead the most laps. Fantasy teams will need to select drivers who start outside the top 10 Sunday. These drivers will have the best chance to score bonus points for position differential at Sonoma.

Kyle Busch ($11,100) is still looking for his first win in the Monster Energy NASCAR Cup Series in 2017 and he should get the job done Sunday. It takes an aggressive driver to win races at Sonoma. No driver is better at it than Busch. He has two wins at the track, including a trip to Victory Lane in 2015 after breaking his leg earlier in the season. The biggest story of the 2017 season has been Joe Gibbs Racing inability to win a race. This story will come to an end when Busch takes a bow in Victory Lane Sunday.

Kevin Harvick ($11,900) is another driver looking for his first win this season. Harvick has never won at Sonoma but he is no stranger to finishing up front. Harvick has finished five of the last seven races on the road course in the top 10. Rodney Childers is one of the smartest crew chiefs in the garage. I like Harvick’s chances if this race comes down to fuel strategy Sunday.

Joey Logano ($10,100) is one of the safest picks for the race Sunday. Logano has finished five of the last six races at Sonoma in the top 11. He has not finished outside the top five since 2014. Logano still needs a win to secure his spot in the playoffs since his win at Richmond was encumbered for failing post race inspection. Logano has the skills to get to Victory Lane on any road course and he will be a great pick for your fantasy team this week.

Denny Hamlin ($9,900) came one turn away from winning this race last year. He followed up his solid run at Sonoma with a trip to Victory Lane at Watkins Glen. Joe Gibbs Racing is always good at the road courses. There drivers have the talent to get the cars up front and their crew chiefs have the knowledge to keep them there. Hamlin and crew chief Mike Wheeler are a dangerous combination in the Toyota / Save Mart 350.

Clint Bowyer ($9,500) will be in the car that won this race last year. Bowyer was one of the best drivers in the sport at Sonoma before he moved to HSott Motorsports last year. Bowyer should once again be at the top of your list of drivers now that he has a good car from Stewart-Haas Racing. Bowyer finished eight of the last 10 races at Sonoma in the top 10, including a trip to Victory Lane in 2012. This will be the best chance for Bowyer to win a race in this season.

Kasey Kahne ($7,900) is a former race winner at Sonoma and he is one of the best value picks this week. Kahne has finished four consecutive races at the track inside the top 10. He has an average finishing position of 8.6 at Sonoma since joining Hendrick Motorsports in 2012. Kahne should add another top-10 finish to his road course resume this week.

Dale Earnhardt Jr. ($7,000) is not the first name people think of when it comes to road course racing. Earnhardt really struggled in these races for most of his career but he worked on his technique and now he is one of the best drivers in the field. Earnhardt has the fourth-best driver ranking and the eighth-best average finishing position in the last four races at Sonoma. My only concern is his ability to shift gears in the car. Earnhardt blew two engines at Pocono for improper shifting. Earnhardt will have value if he looks good in practice this week.

AJ Allmendinger ($6,600) is always the first name that comes to mind when the series competes at a road course. Allmendinger is a road course ace who always runs up front at these tracks. He is better at Watkins Glen but he should never be counted out at Sonoma. This is the Super Bowl for the No. 47 team. Winning a race at Sonoma gives the team the best chance at making the playoffs. They will give Allmendinger the best car they have to get the job done Sunday.

Paul Menard ($5,900) is a good value pick at the road course races. Menard has a 14.1 average finishing position in his last six races at Sonoma. He probably will not win the race this week but he should finish in the top 15. That is good value for a driver at his price.

Here are my pre-qualifying picks for the Toyota / Save Mart 350: