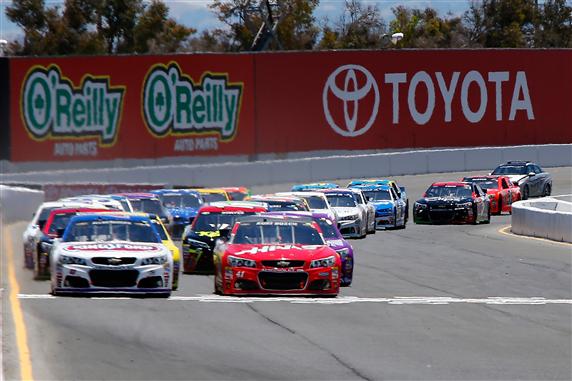 The Monster Energy NASCAR Cup Series travels to Sonoma, California this week for the Toyota / Save Mart 350. The race can be seen Sunday at 3 p.m. ET on Fox Sports 1. Be sure to test your Fantasy NASCAR skills in the Yahoo Fantasy Auto Racing game.

Now that the Monster Energy NASCAR Cup Series has completed 15 races, it will become more important to use your allocations wisely. The race at Sonoma is a perfect track to use some drivers you may not use much this season. Martin Truex Jr., Kevin Harvick, Kyle Larson, Chase Elliott, Erik Jones and Daniel Suarez all have a good chance to run up front Sunday. I would not recommend using these drivers because their allocations are more important at the downforce oval tracks.

There are many good choices in Group A this week but I think the Joe Gibbs Racing cars will show up with a lot of speed. It is amazing this team has not reached Victory Lane this season. That should change Sunday so I am selecting two drivers from the JGR organization for my team. (I would choose Martin Truex Jr. if I had seven or more starts with him)

Joey Logano is the next best choice behind the JGR drivers this week. He finished the last two races at Sonoma in the top five and Logano has an average finishing position of 8.7 since joining Team Penske Racing.

Jimmie Johnson has been a reliable choice at Sonoma. He has finished seven of the last eight races at the track in the top 10. I expect the seven time champion to run well this week since playoff points are on the line.

Busch is still looking for his first win in the Monster Energy NASCAR Cup Series in 2017 and he should get the job done Sunday. It takes an aggressive driver to win races at Sonoma. No driver is better at it than Busch. He has two wins at the track, including a trip to Victory Lane in 2015 after breaking his leg earlier in the season. The biggest story of the 2017 season has been Joe Gibbs Racing inability to win a race. This story will come to an end when Busch takes a bow in Victory Lane Sunday.

Hamlin came one turn away from winning this race last year. He followed up his solid run at Sonoma with a trip to Victory Lane at Watkins Glen. Joe Gibbs Racing is always good at the road courses. Their drivers have the talent to get the cars up front and their crew chiefs have the knowledge to keep them up front. Hamlin and crew chief Mike Wheeler are a dangerous combination in the Toyota / Save Mart 350.

The smart play is to save allocations in Group B this week but Clint Bowyer and Kurt Busch are too good at this track to pass up. I am selecting them for my team and hoping the other two drivers look good in practice. I will not hesitate to pull the trigger and use an allocation with the Stewart-Haas Racing drivers this week.

There are four drivers who are worth consideration for the final two spots in Group B. AJ Allmendinger, Jamie McMurray, Kasey Kahne and Ryan Newman all has a history of running well at Sonoma. McMurray is my top choice but I am down to four allocations with the No. 1 car. I will choose two of the other three drivers for my team this week.

Busch is the best driver in the sport at Sonoma. He has a series-high driver rating (107.8), series-best average running position (9.71) and led the most laps in the series at the track (166). Busch is an aggressive driver who gets the most out of his No. 41 Chevy. He won this race in 2011 and he will have a good chance to win Sunday.

Bowyer will be in the car that won this race last year. Bowyer was one of the best drivers in the sport at Sonoma before he moved to HSott Motorsports last year. He should once again be at the top of your list of drivers now that he has a good car from Stewart-Haas Racing. Bowyer finished eight of the last 10 races at Sonoma in the top 10, including a trip to Victory Lane in 2012. This will be the best chance for Bowyer to win a race in this season.

Allmendinger is fool’s gold at Sonoma but it is too risky to leave him off your team in an allocation game. Allmendinger has started the last three races at Sonoma on the front row so he is a great pick for qualifying points. He has also led laps in three straight races. The problem with Allmendinger is with finishing the races. The No. 47 car has an average finishing position of 29.3 in the last three races at Sonoma. These results have nothing to do with his talent but more to do with his car. Hopefully Allmendinger will put a complete race together this week.

Kahne is a former race winner at Sonoma and he is a good pick this week. Kahne has finished four consecutive races at the track inside the top 10. He has an average finishing position of 8.6 at Sonoma since joining Hendrick Motorsports in 2012. Kahne should add another top-10 finish to his road course resume this week.

Group C is where it will be difficult to find a good driver this week. Road courses tend to be very difficult for rookies. Erik Jones and Daniel Suarez do not have any experience in the Cup Series at Sonoma. I suggest leaving them off your team this week and rolling the dice with the other drivers.

Cole Whitt is my super sleeper pick this week. He is not great but he has a 22nd place finish at Sonoma in 2015. Whitt usually keeps up with the pack and stays out of trouble. He will not have the car to race to the front but he is good at moving up as cars drop out of the race.

McDowell is the driver I plan on using for Group C. He has been running well this season and McDowell is a good road course driver. His background is in racing the Rolex Grand-Am Sports Car Series. The No. 95 car has had mechanical problems the last two races at Sonoma but the team seems to have a closer alliance with Richard Childress Racing this season. I expect McDowell to run well Sunday.

It will be tough to find a good option to pair with McDowell this week. I went with Dillon because I do not want to be tempted to use Erik Jones or Daniel Suarez. Dillon has never competed in a Monster Energy NASCAR Cup Series race on a road course. His average finishing position on the road courses in the Xfinity Series is 8.3 so I will take a chance with the No. 13 car this week.

Other Good Choices: Daniel Suarez and Erik Jones (But I would not recommend burning an allocation with them).