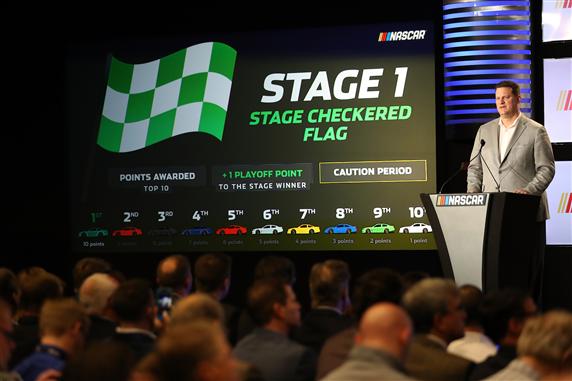 It is that time of year again. It is time for NASCAR to make changes and make the sport better for fans. I am sure some fans will hate the changes, while others will embrace it. I think we just need to give it a shot and see how it all plays out. Most of our favorite drivers and people in the media are pretty excited about the new format. Maybe it will work.

The “Chase” has been replaced by the “Playoffs”.

Races will now consist of three stages, with championship implications in each stage.

The top-10 finishers of the first two stages will be awarded additional championship points.

The winner of the first two stages will earn one bonus points for the playoffs.

The winner of the race will receive five bonus points for the playoffs.

All playoff points will carry through to the end of the third round of the playoffs (Round of 8), with the Championship 4 racing straight-up at Homestead-Miami Speedway for the title.

The race winner following the final stage will now receive 40 points; second-place will receive 35, third-place 34, fourth-place 33, and so on.

Qualifying for the playoffs will remain the same. The regular season champion, plus 15 other drivers based on wins with ties broken by points will get into the playoffs (They must be in the top 30 in the standings).

The way Fantasy NASCAR games are scored should not be changed in 2017, but the way we select our drivers will need to be updated.

So far I talked with Fox Sports Fantasy Auto Racing and Fantasy Live. I was told by Fox that there would be no changes to their game in 2017. The scoring system will remain the same as to what is currently on the Fox Sports Auto Racing scoring rules.

A member from Fantasy Live told me that “Changes are yet to be determined, but more than likely no changes this season.”

I doubt Yahoo Fantasy Auto Racing will make any changes to their game since it has already been released.

I have not heard anything about changes being made to the DraftKings game in 2017.

Starting Position Less Important: Since the games that most of us play will only base our fantasy points off of the drivers “final” finishing position, where a driver qualifies for the race will be less important. In the past the field could get strong out and drivers could quickly go a lap down. The new format will stop the race after each segment and bring the field back together. This should make it much easier for a driver with a fast car to makes his or her way to the front.

No More Sandbagging: In the past teams could win a race and know their spot in the Chase was secured. It will be important for drivers to earn as many bonus points as possible before the Playoffs began. Teams will now have an incentive to win as much as possible. In the past Jimmie Johnson and the No. 48 team was known for “testing” after they won a race early in the season. That strategy will not work in 2017 since total points determine if the driver makes the Playoffs and the bonus point’s carryover throughout the playoffs.

Past Results Matter Less: One of the best ways to select your fantasy driver is to look how he or she performed in the past at the track. The new scoring format changes everything. Drivers will not be able to race the tracks the same way they did in the past. New strategies will have to be made and it will be more important to go with the drivers who have momentum throughout the season than it will be to simply select the drivers who have a history of running well at a track.

Top 10s are the Way to go in 2017: Since the new format rewards drivers who finish each segment in the top 10, each driver will do whatever it takes to get there. Fantasy teams need to look at which drivers consistently run in the top 10 each week and each segment. This should be one of the highest factors when selecting your team. They will be in the best position to win the race.

More Crashes in 2017: NASCAR wants closer racing and that should be what they get this season. While this is good for fans, it can be bad for your fantasy team. Closer racing usually means more wrecks. That should be even truer this year with so many points on the line in each segment. Fantasy teams should be willing to play contrarian drivers even more this year since the probability of one of the top drivers being involved in an accident should be higher.

I am not sure how the new scoring system will affect the product on the race track but I am willing to give it a try. The fact that teams cannot simply win a race and then go into hibernation until the Playoffs begin is good for the sport. It is also good that a driver who crashes with 10 laps left in the race can still be rewarded with a “good day” if he or she finished one of the first two segments in the top 10.

What we saw last year at Talladega in the Chase with the Joe Gibbs Racing team will never happen again. Running in the back on purpose to avoid a wreck will no longer be rewarded. I think that is good for the sport.

The changes NASCAR made will create better racing, but it should make picking your fantasy team more difficult. Whenever you add more variables to an equation the math becomes more difficult. I will be here to make sure 1 +1 = 2 and we all win our fantasy leagues in 2017.

Be sure to sign up as a member and use the forum to ask me any questions you may have this season.