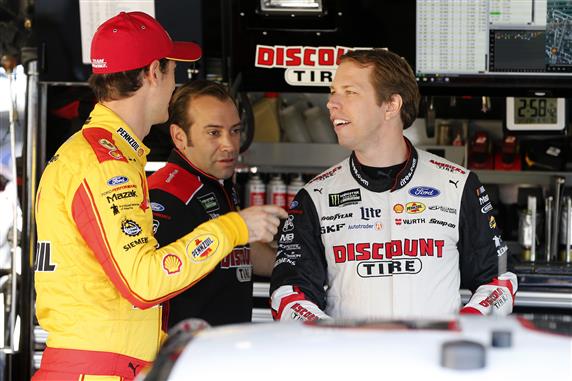 The NASCAR Cup Series will travel to the Heartland for some mid-week racing at Kansas Speedway. This track is a 1.5-mile tri-oval track, similar to Kentucky and Las Vegas. The stats from the last two races (Texas and Kentucky) should give us an idea of which drivers will be fast Thursday night, but it is also important to look at who was fast at Kansas last year. Here are my race notes for the 2019 Hollywood Casino 400…

– The Track: The playoff race at Kansas had a lot of lead changes and not a lot of cautions. There were 12 drivers who were able to lead laps and only 3 cautions for accidents. The first half of the race did not see many cautions so it was very important to have a car that was good on the long runs.

* Many of the top drivers pitted at the caution with 4 laps to go in Stage 1. They gave up Stage points to get track position to start Stage 2.

– Martin Truex Jr. had been the king of the 1.5-mile tracks in 2019. His race at Kansas was pretty good. All of the Joe Gibbs Racing cars sacrificed qualifying positions so their cars would have a lot of drivability in the race. Truex finished 4th in Stage 1, 3rd in Stage 2 and 6th in the race. The No. 19 car was also able to lead 33 laps at Kansas.

– Kyle Busch qualified 18th and he quickly made his way to the front. He spent most of the time in Stage 1 running in the top 6. He had to fix a fender that was rubbing at the end of Stage 1 and it cost the No. 18 team some track position. Busch was able to finish 10th in Stage 2 and 3rd in the race despite having some mechanical problems with the car.

– Denny Hamlin qualified 23rd. The team worked on their long-run speed in practice and it paid off. Hamlin slowly made his way to the front. He finished 8th in Stage 1 before taking the lead on lap 227. Hamlin was able to lead a race-high 153 laps and went to Victory Lane for the first time at Kansas Speedway.

– Erik Jones qualified 20th and his car was a lot better in race trim than it was in qualifying trim. Jones quickly made his way through the field and finished 9th in Stage 1. The No. 20 car spent most of the race running in the top 10. Jones had a 7.5 average running position (6th best). He was able to finish the race in the 7th position.

– Brad Keselowski won the spring race at Kansas and the team trimmed the car out so they could start up front. Keselowski ran up front in Stage 1 but lost some track position in the pits at the end of the Stage. Keselowski had a 12.5 average running position (10th best) but he stayed out on the caution with 11 laps to go. His old tires could not hold off the competition and the No. 2 car finished 19th.

– Joey Logano qualified 29th and he quickly made his way to the front of the field. Logano had a vibration on lap 25 so he had to pit and went 2 laps down. There were 2 cautions late in Stage 1 which allowed Logano to get his laps back. Logano stayed out at the end of Stage 1 while almost all of the cars pitted. It allowed Logano to win the first Stag. He also finished 7th in Stage 2 and he was running in the top 10 when he spun out on the last lap. Logano finished 17th. His car was better than the 17th-place finish suggests.

– Ryan Blaney had a good car. He qualified 3rd and led 2 laps in the first Stage. Blaney was able to finish 7th in Stage 1 and 2nd in Stage 2. His average running position was 7.1 (5th best). Blaney lost a lot of spots at the end of the race because his car was not good on the restarts. The 3 cautions with 11 laps left caused the No. 12 car to finish 21st. He had a top 5 car all race.

– Kevin Harvick started last because they failed pre-race inspection. Havick went from 40th to 20th in only 15 laps. The car was too tight in Stage 1 but they worked on it and the car came to life in Stage 2. The No. 4 car finished 6th in Stage 2 and 9th in the race. His car was better on the long runs so the 3 late race restarts hurt his ability to finish in the top 5.

– Clint Bowyer qualified 21st. The team worked on their long-run speed in practice. The car started off too loose in the race. They worked on the car and it got better. Bowyer did not score any Stage points in Stage 1 but he was able to finish 9th in Stage 2. Despite a vibration in the car, Bowyer finished 8th at his home track.

– Aric Almirola is usually better in the spring race than the fall race at Kansas and that was the case in 2019. Almirola finished 12th in the spring but had a hard time running in the top 10 in the fall. Almirola had a 17.6 average running position (19th best) and he did not score any Stage points. The No. 10 car came home in the 23rd position.

– Chase Elliott entered the race in a “must win situation” because of bad luck in the previous playoff races. Elliott used pit strategy to finish 2nd in Stage 1. The No. 9 team worked to free up the car and Elliott spent most of the race running in the top 10. Elliott had a 5.8 average running position (3rd best). His car was not fast enough to catch Hamlin at the end of the race though. Elliott finished 2nd.

– William Byron had one of the best cars in practice but he only qualified 25th. The car had a lot of long-run speed. Byron did not score any Stage points in Stage 1 but after a pit stop to fix a tight racecar, Byron was able to finish 4th in Stage 2. The No. 24 car spent the rest of the race in the top 10 and finished 5th.

– Alex Bowman had a great race in the spring at Kansas. He had one of the best cars and finished 2nd. The No. 88 car was good but not great in the fall race at Kansas. Bowman qualified 16th, did not score any Stage points, had a 17.5 average running position (17th best) and finished 11th.

– Jimmie Johnson qualified 12th and his car was decent. Johnson had a 14.9 average running position (15th best). He did not score any Stage points and he slapped the wall a few times during the race. The damage was not too bad. Johnson was able to finish 10th.

– Kyle Larson cracked his ribs in a wreck in the previous race at Talladega. He had his ribs taped but said it was hard to manage the g-force pressure in the race.  Larson qualified 5th and he took the early lead. He led 18 laps in Stage 1. Larson had a 7.8 average running position (8th best) so it was amazing he was not able to score any Stage points. Larson was a lot better than his 14th-place finishing position suggests. Matt Kenseth will drive this car Thursday.

– Ryan Newman qualified 7th and he had a tire go down on lap 8. Newman had to pit and he went a lap down. The No. 6 car spent most of the race trying to get back on the lead lap. Newman crashed on lap 72 and it sent his car to the garage. Newman finished last.

– Ricky Stenhouse Jr. qualified 19th and he was running in the 14th position when he got into the fender of his teammate (Ryan Newman) with 5 laps to go in Stage 1. Stenhouse was able to pit to fix the damage. The No. 17 car finished 10th in Stage 1 and 16th in the race.

– Austin Dillon had his car trimmed out so he could start up front. The No. 3 car qualified 9th but quickly fell back in the pack once the green flag was waived. Dillon did not score any Stage points, had a 21.4 average running position (24th best) and finished 20th.

– Paul Menard had one of his best races of the year. The No. 21 car qualified 22nd and he kept moving up in the race. He finished 8th in Stage 2 and he had a 14.9 average running position (16th best). Menard lost some track position at the end of the race and finished 18th. Matt DiBenedetto will be driving this car this week. He finished 15th in his Leavine Family Racing Toyota. DiBenedetto should be a lot better in the Wood Brothers Ford.