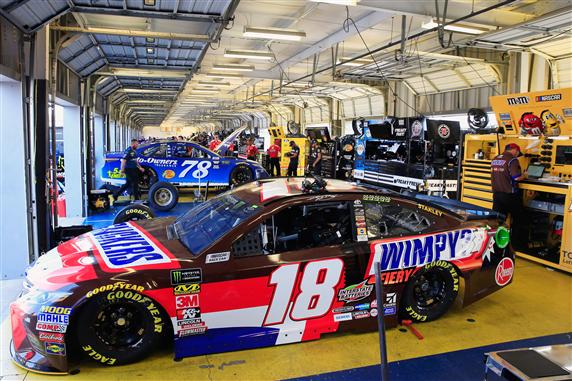 NASCAR will head to the Blue Grass state Sunday to compete at Kentucky Speedway. This track is a 1.5-mile tri-oval track (Same as Kansas, Chicago and Las Vegas). The only data that is similar to Kentucky is from the race at Las Vegas, but that was a long time ago. We can use the results from last year to help predict who will be fast Sunday. Here are my race notes from the last race at Kentucky…

– The Track: Four-wide racing at Kentucky? That is what we had last year in the Quaker State 400. NASCAR decided to add traction compound from the middle groove to the top of the track and it created multiple lanes for the drivers to pick up speed. It was a great battle between the Busch brothers for the trophy.

– Martin Truex Jr. entered the race at Kentucky as the favorite last year. He won the race at the track in 2017 and 2018 and he also led 324 laps and won every Stage. His race was not as good in the 2019 aero package. Truex qualified 8th and was running in the top 10th spot for most of the race. He did not lead any laps and was only able to finish in the 19th position (His worst ever finish at the track). After the race Truex said, “Our setup was completely in leftfield this week. Every adjustment we made, just made the car worse.”

– Kyle Busch is always fast at Kentucky. He has 2 wins at the track and a 4.67 average finishing position in his 9 races in the Blue Grass State. Busch qualified 10th and went straight to the front. The No. 18 car finished 3rd in Stage 1 and won Stage 2. Busch led a race-high 72 laps and had a race-best 4.25 average running position. He could not beat his brother to the checkered-flag after a late-race restart, but he did beat him back to Charlotte since he left on his plane after the race and left his brother looking for a ride back home.

– Denny Hamlin was one of the best drivers in the 2019 aero package on the intermediate tracks. He had a solid race at Kentucky last year. Hamlin used a race setup for qualifying so he had to start the race from the 18th position. Hamlin quickly made his way through the field. The No. 11 car finished 4th in Stage 1 and had a 9.09 average running position (5th best). Hamlin finished the race in the 5th position.

– Erik Jones is always good at Kentucky. The track ranks as his 2nd-best track. He has finished every race at Kentucky in the top 7. The No. 20 car was fast again at Kentucky in 2019. Jones qualified 21st (he had a race setup in the car for qualifying) and he went to the front in Stage 1. Jones finished 2nd in Stage 2 and ran up front in the final Stage. He battled the Busch brothers on the final restart but couldn’t maintain speed at the bottom of the track. Jones ended the race in the 3rd position.

– Brad Keselowski has been hit or miss in his career at Kentucky. He has finished 20th, 3rd, 39th and 1st in his last 4 races at the track. His race was not very good in the 2019 aero package at the track. Keselowski qualified 3rd but there was a bad vibration in the car. The No. 2 car did not score any Stage points and Keselowski did a good job nursing the car to a 20th place finish.

– Joey Logano had the best car in practice and it translated into the best car in the race. Logano qualified 11th because the team used a race trim setup for qualifying. Logano quickly made his way to the front. The No. 22 car led 19 laps, finished 2nd in Stage 1 and 4th in Stage 2. A late caution caused Logano to lose track position and forced the No. 22 car to finish in the 7th position. (He had a 2 second lead over Kyle Busch with 4 laps to go but a caution took away his lead)

– Ryan Blaney was really good at the 1.5-mile tracks last year but the race at Kentucky was not one of his best. Blaney ran outside the top 10 in practice and he did not look much better in the race. The No. 12 car qualified 15th and it took Blaney until Stage 2 to crack the top 10. His average running position was 15.78 (16th best) and he was only able to finish the race in the 13th position.

– Kevin Harvick entered the race at Kentucky with 6 consecutive top-10 finishes at Kentucky. He had never finished outside the top 9 at the track while piloting the No. 4 car for Stewart-Haas Racing. Harvick qualified 5th and he was running up front in Stage 1. Harvick finished 6th in the first Stage but it was all downhill from there.  Harvick lost track position due to a tight racecar and bad restarts. He decided to give up the 9th spot with 4 laps to go to come to pit road for 4 fresh tires. The new rubber did not pay off and Harvick finished 22nd in the race. .

– Clint Bowyer qualified 7th and was running in the top 10 when he had a tire go down in Stage one. Bowyer got the Lucky Dog during the caution and it allowed him to get back on the lead lap. The No. 14 car finished 5th in Stage 2 and used pit strategy to take the lead. Bowyer led 40 laps and finished 6th in the race.

– Aric Almirola joined his teammate (Daniel Suarez) on the front row to start the race. Almirola spent a lot of time in the top 5 in the first Stage. Almirola finished 5th in Stage 1 but the car kept getting tighter as the sun went down. Almriola finished 10th in Stage 2 and had a 7.83 average running position (3rd best). The late-race restarts hurt the No. 10 car and caused Almirola to finish 14th. Almirola had a top-10 car in the race though.

– Daniel Suarez led every category in practice. He was fastest on the 5-lap, 10-lap and 15-lap speed charts. He won the pole and led 52 laps. The No. 41 car did not score any Stage points but Suarez was able to finish 8th in the race. Cole Custer will be driving this car this week.

– Chase Elliott qualified 20th and he was making his way to the top 10 when he had a tire go down in Stage one. The No. 9 car had to pit and it put Elliott a lap down. He spent the rest of the race trying to get back on the lead lap. Elliott did not score any Stage points and finished the race in the 15th position.

– William Byron fought a tight racecar all night at Kentucky last year. The No. 24 car qualified 12th and he fell back through the field early in the race. Chad Knaus told him to be patient and that the car would come to him. It never did. Byron had a 15.32 average running position (14th best) and finished the race in the 18th position.

– Alex Bowman entered the race after the winning at Chicagoland Speedway just two weeks prior to the race at Kentucky. Most people thought Bowman would be a factor in this race but the No. 88 car never showed consistent speed. Bowman qualified 22nd and had a 17.66 average running position (18th best). He finished the race in the 17th position.

– Jimmie Johnson has never been to Victory Lane at Kentucky and the track ranks as his 16th-best track. His night was not very good at the track last year. The No. 48 car qualified 13th and Johnson was unable to find the top 10. Johnson had a 19.22 average running position (23rd best) and an accident on lap 180 caused Johnson to finish the race in the 30th position.

– Kyle Larson has been good in his career at Kentucky. The track ranks as his 4th best track. He finished his last 3 starts at the track in the top 9. Larson had another good race at Kentucky last year. He qualified 19th and quickly made his way to the front. Larson finished 6th in Stage 2 and ran the final Stage in the top 10. The No. 42 car was not as good as their teammate (Kurt Busch), but Larson was able to pick up some position on the late-race restart and finish the race in the 4th position. Matt Kenseth will be driving this car Sunday after his 2nd place finish at the Brickyard.

– Ryan Newman failed pre-race inspection so the No. 6 car had to start the race in the back of the field. Newman did his thing… He slowly passed cars and made sure it was impossible for other drivers to pass him. He did not score any Stage points but the No. 6 was one of the best for DFS lineups. Newman qualified 35th and finished 9th, scoring 26th place differential points in the race.

– Ricky Stenhouse Jr. had a better race for Fantasy NASCAR teams than he did for his real NASCAR team. Stenhouse qualified 16th and had one of the better cars in the sunlight. Stenhouse finished 7th in the first Stage but lost some speed when the sun went down. Stenhouse finished 12th and scored 4 place differential points. The race is during the day this year.

– Chris Buescher had a great race for Fantasy NASCAR teams. He did not have much speed in practice and it took a long time for the No. 37 car to come to life. Buescher was good on the restarts at the end of the race and it allowed him to finish in the 10th position and score 15 place differential points.

– Austin Dillon started the race with a fast racecar but it did not last. The No. 3 car qualified 9th and he spent most of the first-half of the race running in the top 12. He was able to finish 3rd because of pit strategy in Stage 2. He had an alternator belt go bad in the final Stage and it ruined Dillon’s race. He finished 35th.