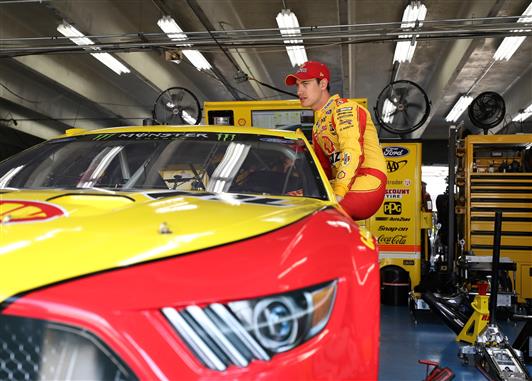 The NASCAR Cup Series returns to mid-week racing. The series will make the short trip from Charlotte, N.C. to Martinsville, VA. Drivers either know how to turn fast laps at this paper-clip shaped track or they don’t. The same drivers usually finish in the top 10 so the best way to predict the future for the Blue-Emu Maximum Pain Relief 500 is to evaluate what happened in the past. Here are my notes for the last race at Martinsville…

– The Track: Martinsville had rain overnight so the track was slick when the race started. It took about 100 laps for the track to take some rubber. They did not add any traction compound to the track so the inside lane was the preferred racing groove. Some drivers slowed down on pit road to get an inside starting spot on the restarts since drivers lost a lot of spots if they were pinned on the outside line.

– Martin Truex Jr. qualified 3rd and he totally dominated this race. The No. 19 car won both Stages and led 464 of the 500 laps. He also ran well in the spring race at Martinsville. Truex was by far the best driver in this race and the best on the short tracks in 2019. How good was Truex in this race? His average running position over the 500 laps was 1.07.

– Denny Hamlin won the pole and he took the early lead. Hamlin led the first 30 laps before Martin Truex Jr. took over. Hamlin had one of the best racecars. His average running position in the race was 4.66 (4th best). The No. 11 car finished 2nd in Stage 1, 8th in Stage 2 and 4th in the race.

– Kyle Busch qualified 13th. He spent most of the race running inside the top 10. His average running position was 8.09 (7th best). His car was lacking “lateral grip”, meaning the backend would slide out when he rolled into the corners. Busch finished 9th in Stage 1 and 7th in Stage 2. He was spun out by Aric Almirola on lap 363. The No. 18 team had to make a lot of repairs to the car. Busch was still able to finish 14th.

– Erik Jones had one of the fastest cars in practice. The No. 20 team had the same setup as Martin Truex Jr. His car did not perform as well as the No. 19 car in the race though. Jones ran most of his laps around the 10th position but he was moved out of the way a few times in the race and it caused him to lose track position.  Jones was able to finish 8th.

– Ryan Blaney used the setup that Brad Keselowski used to lead 90% of the laps in the spring race at Martinsville. Blaney was fast in practice and had a good long-run car in the race. Blaney qualified 6th, he finished both Stages in the 3rd position and he finished 5th in the race. The 3.03 average running positions for the No. 12 car was the 2nd best in the race.

– Joey Logano had a good car in the race. He qualified 10th and spent most of the day running inside the top 10. The average running position for the No. 22 car was 5.88 (5th best). Logano finished 5th in Stage 1 and 4th in Stage 2. Logano was running 5th with 42 laps to go when he rubbed fenders with Brad Keselowski. It caused his tire to go down and Logano got into the wall. The No. 22 team fixed the damage and Logano was able to come home in the 8th position.

– Brad Keselowski completely demolished the field in the spring race at Martinsville. He led 446 of the 500 laps and won both Stages. His car took a long time to get going in the October race at Martinsville. Keselowski qualified 15th and did not make his way inside the top 10 until the end of Stage 2. Paul Wolfe worked on the car to free up Keselowski and he was able to finish 3rd.

– Chase Elliott qualified 2nd but the No. 9 team had to change an engine so he started last. He raced from the 38th to the 8th spot in Stage 1. His car was one of the best on the long runs but started to overheat after 100 laps. He broke an axle on lap 185 and it ruined what was a great racecar. Elliott finished 36th but had a top-10 car.

– William Byron had the best car from the Hendrick Motorsports stable which is no surprise since crew chief Chad Knaus has 9 wins at the track. Byron qualified 11th. He finished 6th in both Stages and 2nd in the race. It was the first time he had ever finished in the top 20 at Martinsville.

– Alex Bowman qualified 19th and he moved his way up to the 11th position in Stage 2. He had to pit on lap 155 for a loose wheel and it caused him to go 3 laps down. Bowman spent the rest of the race trying to get back on the lead lap. The No. 88 car finished in the 30th position.

– Jimmie Johnson had a rough race. He qualified 24th and his average running position was 21.43 (23rd best). He ran into a tire on pit road and then into Brad Keselowski on his pit stop on lap 185. Johnson had his race end early and the No. 48 car finished last.

– Kevin Harvick got loose in qualifying so he had to start 22nd. He lost some spots at the start of the race because he was stuck on the outside. Harvick slowly worked his way to the front. Harvick did not score any Stage points but he was able to finish the race in the 7th position.

– Clint Bowyer had a fast car. It should not be a surprise that he ran up front because Martinsville ranks as his best track. Bowyer finished 4th in Stage 1. The No. 14 car had a tire going down on lap 285. Bowyer came into the pits to change two tires. The team changed the wrong tires and the tire they did not change went flat 5 laps later. It caused Bowyer to spend a lot of time in the pits and ruined what was a great race. Bowyer finished 35th but his car had top-10 speed.

– Aric Almirola had another one of the fast Stewart-Haas Racing cars. He finished 7th in Stage 1 and 5th in Stage 2. His car was very good at the bottom of the track. Almirola was racing Kyle Busch for the 5th position on lap 363 when the two cars got together and spun into the wall. The No. 10 received the most damage and it ruined Almirola’s good race.

– Kyle Larson was fast in practice but the rain washed all of the rubber off the track overnight and it caused the No. 42 car to be on the wrong setup to start the race. Larson qualified 14th and his car was too tight in Stage 1. Larson stayed out on a lap 285 caution to gain track position. He took over the lead and it allowed the No. 42 car to finish 2nd in Stage 2. Larson was good but not great. He finished in the 9th position.

– Kurt Busch was not as good in the race as his 6th-place finishing position suggests. Busch qualified 25th and spent most of the race running just outside the top 15. The average running position for the No. 1 car was 14.95 (14th best). His car got better when the laps came to an end and it allowed Busch to finish in the top 10.

– Ryan Newman is always good at Martinsville and it was no different in this race. Newman qualified 35th and he slowly moved his way to the front. Newman did not score any Stage points but he was able to claw his way to a 10th-place finish when the checkered flag was waived.

– Chris Buescher had a similar race to Ryan Newman. He qualified 20th and it took him half of the race to work his way inside the top 10. Buescher had a 15.3 average running position in the race. He did not score any Stage points but he was able to finish in the 12th position.

– Austin Dillon had a decent car. He spent most of his day running inside the top 20. His average running position was 18.22. He had a tire go down and the No. 3 car spun out on lap 348. It caused Dillon to lose a lot of spots. He was fighting to get his laps back in the final Stage. Dillon finished 22nd.

– Ty Dillon usually runs well at Martinsville. He qualified 27th and was running 22nd on lap 183 when the No. 13 car was completely run over by Daniel Hemric. Dillon spun out and went 2 laps down. He spent the rest of the race trying to get his laps back. Dillon finished 24th.

– Bubba Wallace was one of the surprise drivers in the race. The No. 43 car qualified 26th and he slowly worked his way to the front. He spent a lot of time beating and banging on Kevin Harvick and Kurt Busch’s cars right outside the top 10. Not a bad place to be for his team. Wallace did not score any Stage points but he was able to finish 13th.

– Corey LaJoie also ran well in his Scooby Doo Mystery Machine car. He qualified 36th and he had a 22.5 average running position. The No. 32 team worked on the car and LaJoie was able to finish 18th.