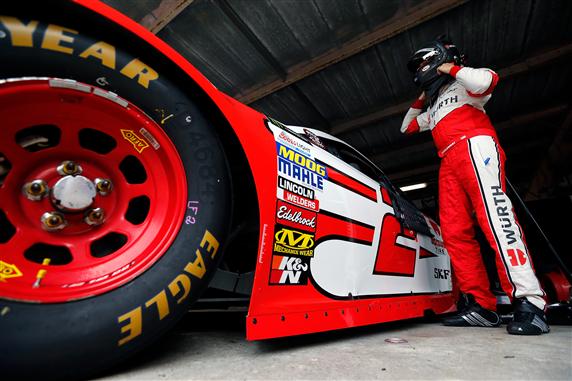 The NASCAR Cup Series travels to the Irish Hills of Michigan this week for another double-header weekend. The cars will compete Saturday at Michigan International Speedway and the top-20 finishers will be inverted for another race on Sunday. The best way to prepare our Fantasy NASCAR teams for this race is to look at the results from the last race at Michigan. Here are my notes from the Consumers Energy 400 in 2019…

– The Track: The last race at Michigan saw a lot of lead changes but not a lot of cautions. There were eight drivers who were able to lead laps but only five cautions in the race. Stage 1 went caution free and there was only one caution in Stage 2. It was very important to have a car that was good on the long runs. It was also important to save fuel because this ended up being a fuel-mileage race. Many of the cars ran out of gas in the final laps and it juggled up the finishing order.

The track applied traction compound to turns 1 and 2 and turns 3 and 4. They wanted the top lane to be more competitive. It took 40 laps for the traction compound to build some grip and allow the drivers to have another racing lane to run in. Having four fresh tires were very important in this race.

* There was a caution with 4 laps to go in Stage 2. Many of the top teams decided to give up their track position so they could start up front in the final Stage.

– Martin Truex Jr. failed inspection so the No. 19 car had to start in the back. Truex went from 38th to 15th in only 5 laps. His car was very fast early in the race. Truex passed Denny Hamlin on the last lap of Stage 1 to win the Stage. He swapped the lead back-and-forth with Brad Keselowski in Stage 2. The No. 19 car finished 2nd in Stage 2 and 4th in the race.

– Kyle Busch qualified 22nd. They set their car up for the long runs. The car was too tight at the start of the race. He ran right inside the top 20 in Stage 1 but Adam Stevens made adjustments to the car and it came to life half-way through Stage 2. Busch took the lead on lap 120 and won Stage 2. He only lead 3 laps in the race but the No. 18 car was able to save fuel better than his competitors and it allowed Busch to finish 6th.

– Denny Hamlin qualified 14th and his car was setup for the long runs. Hamlin quickly made his way through the field. The No. 11 Toyota took the lead from Brad Keselowski on lap 39. Hamlin was able to lead 6 laps, finished 2nd in Stage 1 and 2nd in the race. His car was one of the most consistent all day.

– Erik Jones did not have the speed that his Joe Gibbs Racing teammates had in the Jones. The Michigan native qualified 16th and he had a 13.3 average running position (13th best). Jones ended up finishing the race in the 18th spot. (Jones finished 31st in the Spring race at Michigan so he had a lot of problems in the race too).

– Brad Keselowski won the pole and the No. 2 car took the early lead. Keselowski was able to lead the first 39 laps before he was passed by Denny Hamlin. Keselowski led 66 laps before he had a right-rear tire go down on lap 117 and sent Keselowski sliding through the grass. The damage was not too bad for the No. 2 car. He made his way to the front and was running in the 3rd position with 4 laps to go. Keselowski ran out of gas and it caused him to finish 19th.

– Joey Logano dominated the first race at Michigan. He won the pole, won Stage 1, led 163 of the 200 laps and went to Victory Lane. Logano spent a lot of time running up front in this race too. He qualified 8th and quickly made his way to the front. Logano finished 4th in both Stages. Logano took the lead on lap 127. He was able to lead 52 laps and his No. 22 team was trying to make this a fuel-mileage race. Their strategy did not pay off. Logano had to give up the 2nd spot with 3 laps to go to get fuel. The No. 22 car was the 2nd best in the race.

– Ryan Blaney had a lot of speed. He spent the first-half of the race running in the top 10. Blaney finished 7th in both Stages. Blaney ran right behind his teammate (Joey Logano) in 2nd place in the final Stage. Both drivers were trying to save fuel to make it to the end. The Team Penske Cars (Joey Logano, Ryan Blaney and Brad Keselowski) were running No. 1, No. 2 and No. 3 with only 29 laps left. There fuel strategy did not pay off and each driver finished a lot worse than what they should have.

– Kevin Harvick qualified 2nd and he was running in the 2nd position when he had a tire go down on lap 28. He came in and changed all 4 tires. It caused Harvick to lose a lap. Harvick used fuel strategy to get back to the front. He was able to save better than any other driver running in the top 10. It allowed Harvick to win for the 2nd time in the last 3 races at Michigan.

– Clint Bowyer qualified 5th. His car was too loose early in the race. Bowyer made a late pit stop in Stage 1 so he gave up his track position so he could start Stage 2 up front. Bowyer was able to finish Stage 2 in the 9th position. He was involved in an accident with Paul Menard on lap 138. It caused the No. 14 car to go to the garage and it ended his day. Bowyer finished 37th.

– Aric Almirola qualified 12th and his car was good at the start of the race. Almirola finished 10th in Stage 1 but his car got worse during the race. Almirola did not score any Stage points in the 2nd Stage. His average running position was 21.73 (23rd best). Almirola was involved in an accident on lap 122 with Austin Dillon and Daniel Hemric. The wreck caused the No. 10 car to slide through the infield grass and hit the pit road wall. As a result Almirola finished 33rd.

– Chase Elliott qualified 6th and he was running in the top 10. The No. 9 teams decided to short-pit in Stage 1 and use the fresh tires to gain some speed on the track. Elliott was able to keep up with the leaders and finish 9th in Stage 1 and 6th in Stage 2. His car was good but not great. Elliott had an 11.69 average running position (10th best) and finished the race in the 9th position.

– William Byron qualified 3rd and his car was fast all day. Byron had an 8.46 average running position (7th best). The No. 24 car finished 5th in Stage 1 and 8th in Stage 2. Chad Knaus worked to tighten up the car on the long runs and it seemed to work. Byron was able to finish 8th in the race after the three Team Penske Racing cars ran out of fuel in front of him..

– Alex Bowman qualified 4th and his car was fast at the start of the run but went to the tight side as it got deeper in the run. Bowman finished 8th in Stage 1 and then fell outside the top 10 in Stage 2. Bowman had a 9.43 average running position (9th best). The No. 88 car was able to finish the race in the 10th position do to perfect pit strategy in the final Stage..

– Jimmie Johnson qualified 10th. He was running 12th when he smacked the wall while trying to pass Clint Bowyer on lap 16. The fender was bent in and caused his right-side tires to go down. Johnson lost a lot of track position and caused the No. 48 car to finish 34th.

– Kyle Larson is always good at Michigan but it took a long time for Larson to show up at one of his best tracks. Larson qualified 17th and his car was not very good at the start of the race. He tried to be the first driver to run the top of the track in the traction compound but it was too slick and Larson almost hit the wall. Once the top lane came in, Larson came to life. He did not score any Stage points but was able to finish 3rd in the race.

– Kurt Busch has a history of running well at Michigan. The Consumers Energy 400 was a decent race for the No. 1 team. Busch qualified 13th and fell through the pack early in the race. The team worked to fix a tight race car. They used pit strategy to steal a 3rd-place finish in Stage 2. Busch was running 10th with 2 laps to go but ran out of gas and finished 23rd.

– Ryan Newman had a typical “Ryan Newman Race.” He qualified 20th and slowly made his way to the front. Newman avoided making any mistakes and he made it very difficult for cars to pass him. Newman did not score any Stage points but he was able to score 8 place differential points and finished 12th when 5 cars running in front of Newman ran out of gas on the final lap of the race.

– Ricky Stenhouse Jr. did not have a good race. The No. 17 car qualified 18th and Stenhouse spent most of the race running outside the top 20. His average running position was 23.89 (26th best). Stenhouse did not score any Stage points, lost 10 place differential points and finished 28th.

– Chris Buescher had a better race for Fantasy Teams than he did for his race team. Buescher qualified 25th and spent most of the day running around the 16th position. Buescher did not score any Stage points but did score 11 place differential points. Buescher finished 14th in the race after running out of gas on the last lap of the race. Buescher also finished 16th-place finish in the spring race at Michigan.

– Austin Dillon had a tire go down during qualifying so he had to start 37th. He was one of the highest-owned drivers in DFS and he did not disappoint. It took Dillon a long time to make his way through the field and once he did make his way inside the top 15, Dillon was involved in an accident on lap 138 with Paul Menard and Clint Bowyer. The No. 3 car was able to recover and finish 13th. Dillon scored 24 place differential points.

– Ty Dillon had a good race. The No. 13 car qualified 21st and Dillon had an 18.72 average running position (20th best). Dillon did not score any Stage points but he was able to use pit strategy to gain some track position in the final Stage. Dillon finished 11th and scored 10 place differential points after he gained 5 spots when cars running in front of him ran out of gas on the final lap of the race.