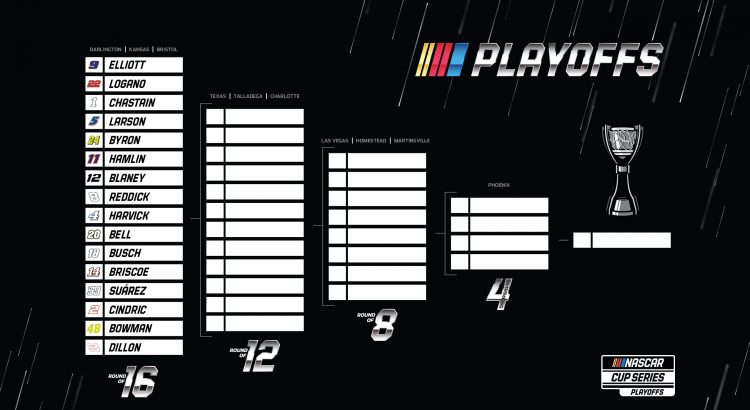 The 2022 NASCAR Cup Series Playoffs will take the green flag Sunday night at Darlington Raceway. The field of 16 is set and now it is time to predict which driver will take home the Bill France Cup Series Trophy.

Each driver was awarded points based on how many races they won, how many Stages they won and where they finished in the regular season points standings. Each point is worth one position in the race, so the more playoff points a driver has; the easier it will be for the driver to advance in the playoffs. Here are the point’s standings for each driver entering the race at Darlington… 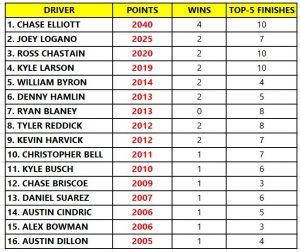 Chase Elliott not only led the Cup Series in wins and top-five finishes; he also received 15 bonus points for winning the regular season championship. The top-12 drivers will advance after the first three races (Darlington, Kansas and Bristol). Elliott has a 33 point lead over the 13th-place driver (Daniel Suarez), so he just needs to finish each race and he should advance to the Round of 12.

Here are the NASCAR Cup Series Playoff Bracket, the races for each round and the driver’s position in the rankings… 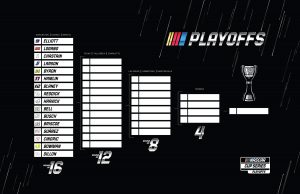 So who will advance in each round? Here are my predictions….

The winner of each race automatically advances to the next round. Joey Logano smoked the field at Darlington in May by leading 107 laps, scoring 18 Stage Points and going to Victory Lane but he is not my pick to win the Southern 500. Kevin Harvick is my pick to win Sunday night and the first driver to advance into the Round of 12. Harvick won the last two races on oval tracks and he finished 4th, 5th, 6th, 1st, 3rd, 1st, 4th, 4th, 9th, 2nd, 5th and 1st in his last 12 races at “The Lady in Black”. To say Harvick knows how to tame “The Track Too Tough to Tame” is an understatement.

The next race is at Kansas. This race was dominated by Busch in May. Kurt Busch led 116 of the 267 laps and went on to Victory Lane. I will pick the race in the Heartland to be dominated by Busch again in the playoffs but this time it will be Kurt’s brother Kyle Busch. I expect Kyle to announce where he will be driving in 2023 right before this race. That will take a big weight off his back and allow Rowdy to be Rowdy. He finished third at Kansas in May. I have him in Victory Lane in the second race in the playoffs.

The third race of the playoffs is the Bristol Night Race. I am so glad they are taking that stupid dirt off the track. This is one of the best races of the season and it would have been a shame if they wrecked it with dirt. Everyone will have Kyle winning this race. Most people think it will be Kyle Busch, but I will go with Kyle Larson. “Yung Money” led 175 laps, scored 19 Stage Points and won this race last year. I will pick Larson to go to Victory Lane again in the last race of the Round of 16. 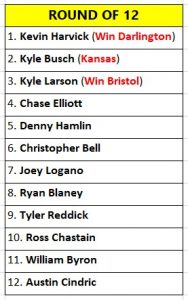 The first race of the Round of 12 is at Texas. I know the easy way to go is to simply advance Ryan Blaney since he won the All-Star Race at Texas this year. I will pick the driver who finished second in that race to go to Victory Lane in the playoffs. Denny Hamlin has been good on the 1.5-mile tracks this year and he has a history of running well at Texas. Hamlin won the race at Charlotte, finished fourth at Kansas and second at Texas. Hamlin will be my first driver to reach the Round of 8. 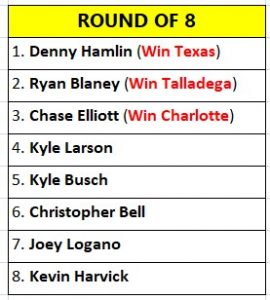 The 2022 season has seen a lot of chaos and I expect it will continue in the playoffs but it will not show up until the Round 8. I have two drivers who are eliminated from the playoffs winning two of the three races in this round. That means three drivers will advance to the Final Four on points.

The first race of the Round of 4 is at Las Vegas. Ross Chastain has had the most speed on the 1.5-mile tracks this year. He led 153 laps at Charlotte and 83 laps at Las Vegas in March. I have Chastain eliminated from the playoffs by now because the other drivers made sure he did not get this far. Now the final eight teams have to worry about their car and not Chastain. This is when the No. 1 car sneaks into Victory Lane in Sin City.

The second race in the Round of 8 is at Homestead. I would love to see Homestead go back to being the championship track but this is a good track to settle the final four. I have another driver who is eliminated from the playoffs in Victory Lane at Homestead. Tyler Reddick has competed in two races at Homestead in the Cup Series. He finished 4th in 2020 and 2nd last year. Each season he cuts his finishing position in half. This year he will cut the 2 into a 1 with a trip to Victory Lane in Southern Florida.

The final race of the Round of 8 is at Martinsville. Chase Elliott has been the best driver at Martinsville over the last three seasons. He led 185 laps and finished 10th at Martinsville in April and he led 289 laps in this race last year. Elliott’s teammate (William Byron) won this race in April. Those notes will be going to the No. 9 team for this race. This is where Elliott gets on his hot streak.

There will be three drivers advancing to the championship race at Phoenix since I have two non-playoff drivers winning in the Round of 8. The three drivers joining Elliott in the Championship Four will be Kyle Larson, Denny Hamlin and Kyle Busch. The drivers who are now eliminated include Kevin Harvick, Christopher Bell, Joey Logano and Ryan Blaney. 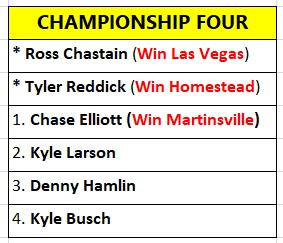 *Ross Chastain and Tyler Reddick are eliminated from the playoffs so they do not advance to Phoenix.

I have the 2022 season coming down to a battle between two drivers from Hendrick Motorsports and two drivers from Joe Gibbs Racing. This should be fun. Team HMS will have William Byron and Alex Bowman trying different setups in practice to help out Chase Elliott and Kyle Larson. Team JGR will have Martin Truex Jr. and Christopher Bell helping Denny Hamlin and Kyle Busch with their setups. But there is a wild card in my scenario…. What if Kyle Busch is not returning to JGR? Is he going to give Hamlin any information? “A house divided against itself shall not stand, “Abraham Lincoln once said. I think that is the difference in this race and the reason why I have a driver from HMS winning the 2022 championship.

Chase Elliott has been the best driver on the short, flat tracks this year. He finished second at New Hampshire (Probably should have won) and fifth at Richmond over the summer. Elliott led 153 laps at Phoenix on his way to Victory Lane and the 2020 NASCAR Cup Series Championship. I will pick Elliott as my driver to be holding the Bill France Cup Series Trophy in Victory Lane in November.