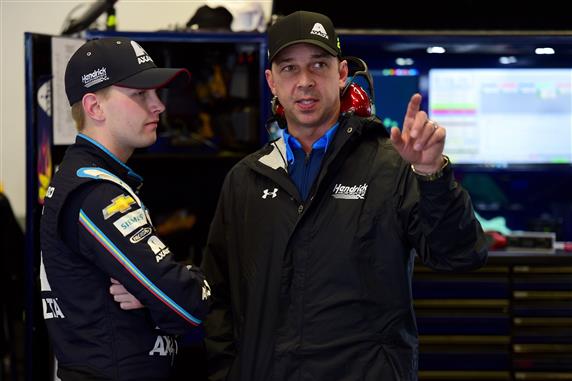 The NASCAR Cup Series will travel to Pocono Raceway this weekend for two races. It is hard to compare Pocono to any other track on the schedule. The best way to predict what will happen Saturday is to evaluate what happened at the Tricky Triangle last year. Here are my notes from the last race at Pocono…

– The Track: The last race at Pocono had a little bit of everything. Many drivers failed inspection and had to start in the back. They included: Chase Elliott (Backup Car), Ryan Blaney, Kyle Larson (Backup Car), Austin Dillon, William Byron, Jimmie Johnson, Chris Buescher, Michael McDowell, Bubba Wallace (Engine Change), Ross Chastain and Corey LaJoie. There was fuel strategy and a caution for rain. We even had one team dominate the race (Joe Gibbs Racing).

The track added traction compound to the top of the track and it provided another groove for the drivers to use. It took a while for it to come in and the rain did not help either. It still helped out drivers like Denny Hamlin, Kyle Larson and Erik Jones in the race. Look for these drivers to be fast this week if NASCAR uses the traction compound this year.

– Martin Truex Jr. won the race at Pocono in 2018 and he was good in 2019 too. Truex qualified 8th and spent the entire day running up front. Truex had a 6.52 average running position (3rd best) and he finished 5th in Stage 1 and 4th in Stage 2. Truex did not lead any laps but he was able to bring his No. 19 Toyota home in the 3rd position.

– Kyle Busch dominated the first race at Pocono. He has won 3 of the last 5 races at the Tricky Triangle. Busch had another solid race in July at Pocono. He qualified 5th and was able to take the lead on lap 40. Busch won Stage 1 and led 56 laps (2nd most) in the race. Busch lost some position in the restarts with less than 5 laps to go and finished the race in the 9th position. His car had top-5 speed all day though.

– Denny Hamlin followed his 6th-place finish in the first race at Pocono with an even better race in July. Hamlin qualified 9th and quickly went to the front. Hamlin had a 3.26 average running position (best in the field) and he finished 4th in Stage 1 and 5th in Stage 2. Hamlin took over the race in the final Stage. The No. 11 car was able to lead 32 laps, conserve fuel and went to Victory Lane for a series-high 5th time. After the race Hamlin said, “This aero package brings me back to when I used to dominate the races at this track. It just fits my driving style perfectly.”

– Erik Jones had two great races at Pocono. It should not be a surprise though since Pocono ranks as his best track. Jones finished 3rd in the first race at Pocono in 2019 and came back and finished 2nd in July. Jones also finished 7th in both Stages, led 10 laps and had a 6.85 average running position (4th best). He was really good running in the traction compound.

– Brad Keselowski had a power steering issue in practice so he did not get a chance to make many practice laps in the No. 2 car. He qualified 11th and he was running in the top 10 when he had a tire go down on lap 5. The pit crew dropped the jack on the pit stop and it caused Keselowski to go a lap down. He got the lucky dog after the caution for rain. Keselowski was able to get his track position back and finish 8th in stage 2 and 8th in the race. (He finished 2nd in the first race at Pocono).

– Joey Logano qualified 2nd and he was running up front in Stage 1. He had one of the best cars in the first-half of the race. Logano finished 2nd in Stage 1 and 3rd in Stage 2. Logano had an 8.77 average running position (6th best) and finished the race in the 13th position. (He lost a lot of positions on the restarts at the end of the race)

– Ryan Blaney failed inspection so he had to start in the back. He quickly made his way through the field and the No. 12 car looked like one of the best cars in traffic. Blaney did not score any stage points in Stage 1 but was running in the top 10 in Stage 2 when he was spun out by Daniel Suarez on lap 100. The No. 12 team worked to fix the damage and Blaney was able to save fuel and finish the race in the 10th spot.

– Kevin Harvick won the pole and he had one of the most dominant cars in the race. Harvick took the lead early in the race and he was hard to pass. Harvick led a race-high 62 laps and finished 3rd in Stage 1 and 2nd in Stage 2. The No. 4 car had to save fuel in the final Stage and it caused the No. 4 car to finish in the 6th position. Harvick had the car to beat but the team had to give up a lot of speed to conserve fuel.

– Clint Bowyer finished 5th in the first race at Pocono and he was looking for another great race in July. Bowyer was good but not great in the race. The No. 14 car qualified 13th and Bowyer ran the first Stage in the top 10. Bowyer was able to finish 10th in the first Stage but ran most of the race around the 13th position. Bowyer pitted for fuel and tires with 2 laps left. His gamble did not pay off. The No. 14 car finished 11th.

– Aric Almirola had another one of the fast Stewart-Haas Racing Fords in the race. Almirola finished the first race at Pocono in the top 10 and he was trying to repeat his solid run in July. Almirola qualified 3rd and he fell back a few spots in the first Stage. He was still able to finish 8th in Stage 1. He spent the rest of the race battling for the 10th position. Almirola had an 11.94 average running position (9th best) and finished 12th.

– Chase Elliott had a fast racecar and a lot of bad luck. That was the story with the No. 9 car during the summer of 2019. Elliott crashed his car in practice so he had to start in the back. He quickly made his way through the field and was running inside the top 10. Elliott had a right front tire explode on lap 83. It sent the No. 9 car into the wall and ended their race. Elliott was running 6th at the time and was heading to the front. He finished 38th.

– William Byron failed inspection and had to start in the back. Byron did not make his way through the field as fast as some of the other cars which started in the back. Chad Knaus worked to free up the No. 24 Chevy and the car finally came to life in the final Stage. Byron did not lead any laps or score any Stage points but he was able to use fuel strategy to finish in the top 5.

– Alex Bowman qualified 12th and he was running around the 10th position when he had to pit for a flat tire early in Stage 1. Bowman did a good job staying in front of the race leader to avoid going a lap down. Bowman finally got some track position in Stage 2. Bowman finished 9th in the 2nd Stage but fell through the pack in the final Stage. Bowman finished 20th.

– Jimmie Johnson failed inspection and had to start in the back. The No. 48 car quickly made his way through the field. He was running 9th in the final laps of Stage 1 but Johnson had to pit for fuel. He gave up his track position and did not score any Stage points in the first Stage but he was able to gain track position for the start of the 2nd Stage. Johnson led 3 laps and won Stage 2. His pit strategy did not work out though and Johnson finished the race in the 15th position.

– Kyle Larson crashed his primary car in practice so the No. 42 team went to a backup car and had to start in the back. His car was by far the best at the top of the track. Larson passed cars with ease in the first Stage. He went from 36th to 6th in the first Stage and finished 10th in Stage 2. Larson spent most of the day running inside the top 10 (his average running position was 9.4 which was 7th best). Larson dominated a lot of the first race at Pocono and he finished 5th at the Tricky Triangle in July. Matt Kenseth will drive this car this weekend.

– Kurt Busch qualified 6th and he had a fast racecar at the start of the race. He was running in the top 10 in Stage 1 and looked fast at the bottom of the track. Busch finished 6th in the 1st Stage and was running in the top 10 in Stage 2. Busch was racing hard with Ricky Stenhouse Jr. for position and got into the No. 17 car. Payback was a bitch for Busch. Stenhouse retaliated on lap 158 causing both cars to spin out. Busch finished the race in the 27th position.

– Ryan Newman has a history of running well at Pocono. He was better in Fantasy NASCAR than he was in the race for his Roush Fenway Racing team. Newman qualified 19th and spent most of the day running near the 15th position. He did not lead any laps or score any Stage points but Newman was able to finish 14th and score 5 place differential points for teams who used him in DFS contests.

– Ricky Stenhouse Jr. qualified 14th and he ran most of his laps near the 15th position. He did not score any Stage points and the No. 17 car had a 16.28 average running position (18th best). He was racing Kurt Busch for position when the two cars banged into each other. Stenhouse repaid the favor on lap 158 and caused both cars to spin out. Stenhouse ended the race in the 21st position.

– Chris Buescher caught lightning in a bottle when he was able to steal a win at Pocono in 2016 when the rain soaked the track. He was hoping for the same luck in the July race last year. The rain was brief so the No. 37 car did not have the same results. Buescher was still good though for Fantasy NASCAR teams. Buescher failed inspection so he had to start from the 33rd position. Buescher did not score any Stage points or lead any laps but he was able to finish 16th and score 17 place differential points for teams who used him in DFS contests.

– Austin Dillon failed inspection and had to start in the back. He spent most of his day running around the 14th position. Dillon used pit strategy to finish 6th in Stage 2. He lost all of his track position after he pitted when the Stage ended. Dillon did not have the speed to get to the top 10. He finished the race in the 19th position.