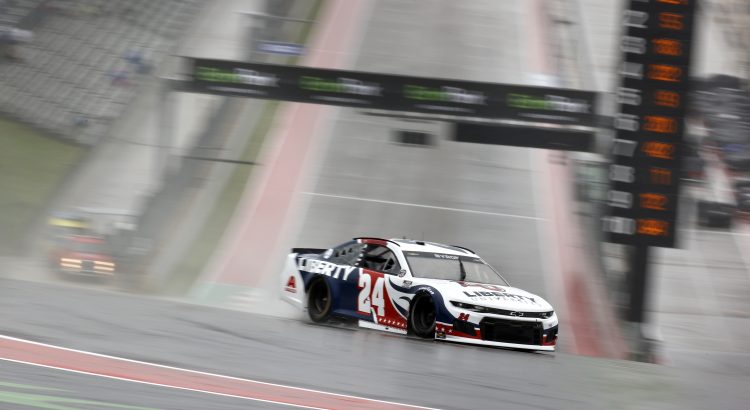 When I wrote my Driver Group Game article Wednesday, the roster lock time was Friday at 8 a.m. ET. Or maybe I read it wrong, but I posted my picks based on not being able to see any practice or qualifying. The lineups need to be submitted by 8 a.m. ET Sunday morning. This means we can use the data from the practice Saturday morning for the picks.

The practice was a mess with a lot of heavy rain. The race forecast for Sunday is for 80% chance of rain, so what we saw in practice could translate into the same speeds in the race.

Here are the updated picks for COTA

Chase Elliott (7) is the best road course driver in the field. He won 4 of the last 5 road course races. Elliott was 5th fastest in practice and Hendrick Motorsports looked like the fastest cars on the track. I plan on using Elliott in the race.

Martin Truex Jr. (5) has been the second-best driver on the road course tracks. His average finishing position in his last 10 road course races is 5th. Truex was not very fast in practice, but I cannot fade Truex on a road course.

* If you are positive you are going to start Chase Elliott in the race and want to take a chance on a driver scoring bonus points for qualifying, pair Joey Logano with Elliott. The No. 22 car was second-fastest in practice and the fastest from Group A. Logano could qualify in the top-five.

Kurt Busch (7) will likely be my one of my starting drivers from Group B. He has some momentum after his good run at Dover and he looked fast in practice. Busch posted the 8th fastest speed in practice. Busch finished 4th in his last two road course races and he should be a threat to finish in the top-five Sunday.

Christopher Bell (7) will likely be the driver I pair with Kurt Busch in my lineup Sunday. Most of the people I talked to said COTA would race a lot like Sonoma and Watkins Glen. I was worried about Bell because he did not race at those tracks in a Cup Series car last year, but his speed in practice proved his win at the Daytona Road Course was not a fluke. The No. 20 car should run well Sunday.

Chris Buescher (9) will be my insurance policy if something happens to Kurt Busch or Christopher Bell in qualifying Sunday morning. Buescher has a history of running well on the road courses and he look fast in practice. Buescher should compete for a top-10 finish and he will allow me to save an allocation with one of my top drivers if I need to use him in the race.

Kyle Larson (3) has been the master at qualifying on the road courses. He has won the pole for the last three races at Sonoma and that is a technical track like COTA. Larson posted the third-fastest speed in practice. I will use Larson for qualifying points only. DO NOT USE LARSON IN THE RACE.

Austin Cindric (9) should be one of the best drivers in this race, not only the best driver in Group C. I like the fact that he had a “practice race” to figure out the track. Cindric finished 4th in the Xfinity Series race and he posted the 18th fastest speed in practice. There were some drivers from Group C who posted faster speeds in practice (Ross Chastain, Chase Briscoe and Michael McDowell) but I trust Cindric and his Team Penske Ford over those cars.

AJ Allmendinger (9) got screwed by NASCAR. His team was the last to go through tech inspection Saturday morning because the No. 16 car was the lowest in the point standings. Allmendinger missed most of the practice and was only able to turn three laps. He said, “I barely got the heat into the tires, but we did figure some things out.” Allmendinger had the Xfinity Series race to figure out how to run at COTA. He finished 2nd in the Xfinity Series race and should be fast Sunday.

I will post my starting lineup Sunday morning after qualifying.