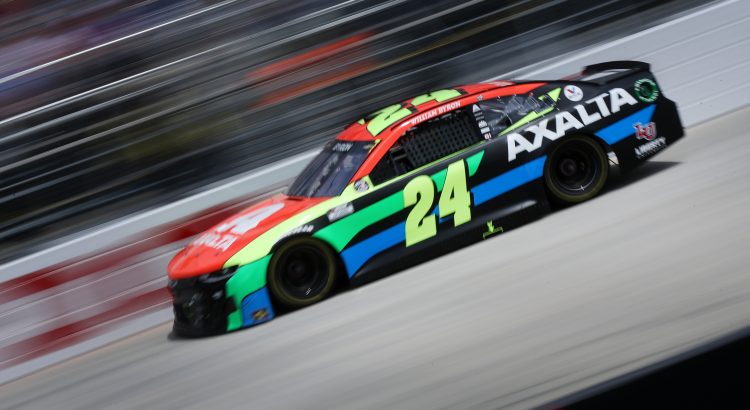 I posted my “Early Week Driver Group Game Picks for Nashville” on Wednesday. The lineups do not lock until 8 a.m. ET Sunday and we got to see a 50-minute practice session Saturday. We have to take advantage of the opportunity to seeing the speeds each car has whenever we are able to. Here are my updated Driver Group Game picks for the Ally 400…

Chase Elliott (4): How can you fade any Hendrick Motorsports driver right now? They clearly have an advantage on the field. The track most similar to Nashville is Dover and all four Hendrick Motorsports drivers took the four top finishing positions, with Chase Elliott finishing 3rd. I have four allocations left with Elliott and I need three for Road America, Watkins Glen and the Charlotte Roval. I will use the other one this week at Nashville.

Denny Hamlin (7): Denny Hamlin ran well at both Darlington and Dover so he should be good at Nashville. Hamlin finished 5th at Darlington and 7th at Darlington. The No. 11 car has finished 12 of the 16 races this season in the top-10 so he should be a safe pick. Hamlin posted the 8th fastest speed with the 12th fastest long-run speed in practice. Hamlin and Kyle Busch looked like two drivers who could compete with the Hendrick Motorsports drivers.

Kyle Larson (2): I am down to two allocations with Kyle Larson but I am not worried about it. The No. 5 car is smoking the competition right now and I am betting that does not continue though the playoffs. The other teams are too smart. They will figure it out, so I am playing Larson while he has an advantage. Larson finished 1st, 1st, 2nd, 2nd and 2nd in his last 5 races. The most similar track to Nashville is Dover and Larson led 263 laps and finished 2nd in that race. He will have a good chance to do the same Sunday.

William Byron (2): William Byron does not have the wins or 2nd-place finishes that Kyle Larson has, but he has been more consistent. Byron finished every race since February in the top-11. The two tracks most similar to Nashville are Dover and Darlington. Byron finished 4th in both of those races. The No. 24 car posted the fastest speed in practice. Byron should have a good chance for a top-5 finish Sunday.

Alex Bowman (7): The word in the garage is that Nashville will race a lot like Dover. If that is true, we need to have the winner of the race at Dover in our lineups Sunday. Alex Bowman started 16th, led 98 laps and went to Victory Lane at Dover. The No. 48 car posted the 10th fastest speed. He fought a tight race car throughout practice but then Chad Knuas came to the Garage and gave the No. 48 team the setup from Kyle Larson and Bowman made another run. He said, “This is what we needed. Good job.” Bowman should be good Sunday.

Tyler Reddick (8) Tyler Reddick has run well lately. His average finishing position in his last five oval track races is 9th. That includes an 8th place finish at Dover. Reddick posted the fastest 5th speed with the 4th fastest long-run speed in practice. I originally planned to use Kyle Busch in this spot but the Hendrick/Childress engine under the hood of the No. 8 car should provide Reddick a chance to score bonus points for qualifying.

Ricky Stenhouse Jr. (4): Ricky Stenhouse Jr. finished 20th at Dover and Darlington. That is not great news for the race this week, but Stenhouse has more experience at Nashville than most of the field. He competed in 5 Xfinity Series in Music City. He finished 2nd and 5th in his last races in 2011. Stenhouse posted the 4th fastest speed, with the 7th fastest long-run speed in practice. I will use another allocation with Stenhouse Sunday if he qualifies up front.

Ross Chastain (7): Chip Ganassi Racing got off to a slow start in 2021, but they seem to be getting better. Ross Chastain finished 15th at Dover and Darlington. A top-10 finish from a Group C drive is pretty good. Chastain posted the 7th fastest speed, with the 2nd  fastest long-run speed in practice. You cannot have too many Chevy’s in your lineup this week. The Bow-Tie Brigade posted the top-7 speeds in practice and 8 of the top-10 speeds.