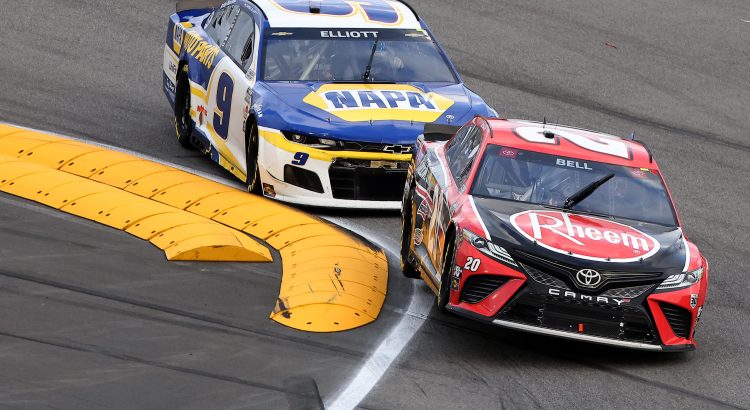 A new track on the Cup Series schedule means the drivers got a 50-minute practice session today at Road America and the field will be set by group qualifying Sunday. This also means our Driver Group Game lineups must be submitted by 8 a.m. ET Sunday. We can move drivers from the bench to the starting lineup after qualifying Sunday, so I will post my picks for the race today and my starting lineup before the race on the 4th of July.

We need to take advantage of knowing the speeds of the cars whenever we get a chance to see the cars on track before our lineups need to be submitted. Here are the lap times from the practice session Saturday at Road America… 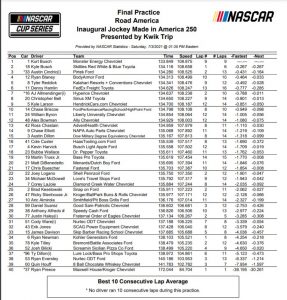 Chase Elliott (3): I have been saving my allocations with Chase Elliott for the road course and so far it has paid off. He won at Circuit of Americas and finished second at Sonoma. He has two races at Road America in the Xfinity Series on his resume. He finished fourth in both races. Elliott posted the 13th fastest speed in practice, but he was slowed down a lot in traffic. It has been tough to beat the Hedrick Motorsports cars for the last two months. Elliott should be one of the top drivers in the race Sunday.

Joey Logano (8): Joey Logano has been the second-best driver (behind Chase Elliott) on the road courses this year. Logano finished 2nd (Daytona Road Course), 3rd (Circuit of Americas) and 4th (Sonoma). He has also led laps in each road course race. Logano has now finished 5 consecutive road course races in the top-four. The No. 22 car posted the 22nd fastest speed in practice, but he was top-10 on the speed chart on new tires. I expect Logano to finish up front again on the 4th of July.

Kurt Busch (5): Kurt Busch has been one of the best drivers on the road courses. Busch finished 4th at the Daytona Road Course and 6th at Sonoma. The most similar track to Road America is Watkins Glen. Busch’s average finishing position in his last six races at Watkins Glen is 7th. That should translate into a top-10 finish Sunday. Busch posted the top speed in practice. He is now racing for a job next year, so I expect a fire to be lit under Busch and he could go off like a firework this summer.

Alex Bowman (5): Alex Bowman has been good on the road courses this year. He finished 10th at the Daytona Road Course, 8th at the Circuit of Americas and 9th at Sonoma. His average finishing position at the road courses over the last two seasons is 9th. Bowman posted the 12th fastest speeds in practice. He should qualify up front and finish up front Sunday.

Tyler Reddick (8): I sure wish I could borrow a driver from Group C this week to use in Group B. There are a lot of good choices in Group C. One of the drivers I watched Tyler Reddick in practice and he looked pretty good. His only complaint was the way the car rotated through the carousal. We get qualifying points if our drivers qualify in the top 10 Saturday. Reddick won the pole for the race at the Circuit of Americas. He posted the 5th fastest speed in practice so the No. 8 car should have a good chance to qualify up front Sunday.

AJ Allmendinger (8):  Allmendinger will once again be in the No. 16 car for Kaulig Racing. Allmendinger has won at Road America before and he could do it again Sunday. He will have two practice sessions and the Xfinity Series race to prepare for the race Sunday. Allemendinger posted the 7th fastest speed in practice. I would use Allmendinger in any Group this week.

Austin Cindric (9): Austin Cindric will be back in the No. 33 for Team Penske Sunday. He has a lot of experience at Road America and he will get even more this week since he is competing in the Xfinity and Cup Series races. That means Cindric will get two practices, two qualifying sessions and 45 laps Saturday to figure out the track. It shouldn’t take him that long to figure it out. Cindric won at Road America last year and he finished 2nd in 2019. He should qualify up front and finish up front Sunday.