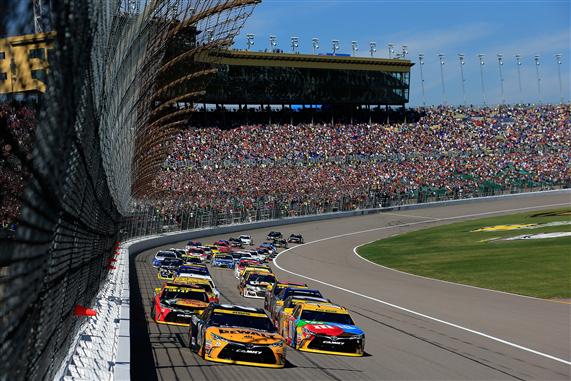 The Monster Energy NASCAR Cup Series travels to Kansas City, Kansas this week for the Go Bowling 400. The race can be seen Saturday night at 7:30 p.m. ET on Fox Sports 1. Be sure to test your fantasy NASCAR skills in the Yahoo Fantasy Auto Racing game.

My picks survived Talladega. It was not pretty but at least I was able to have the race winner, Ricky Stenhouse Jr. (He also won me the pole and 10 bonus points). Fantasy NASCAR players can now get back to some real racing as the Monster Energy NASCAR Cup Series competes at another intermediate track.

The Cup Series has competed on four intermediate tracks this season (Atlanta, Las Vegas, California and Texas). The driver who finished up front in these races should be fast at Kansas. Be sure to check out which drivers performed well at these tracks in my Yahoo Fantasy Auto Racing Intermediate Track Points article.

There are six really good choices in Group A this week. Jimmie Johnson and Matt Kenseth have the best career stats at Kansas. Kevin Harvick and Martin Truex Jr. have been the two best drivers on the intermediate tracks since the beginning of the 2016 season. Brad Keselowski and Joey Logano have run well in every race this season and their stats at Kansas are not bad. I would definitely choose your drivers from this list this week.

Harvick has been the best driver at Kansas the last three seasons. He won the last race at the track and he finished the last three spring races in the second position. The No. 4 team is still looking for their first win of the season. Do not be surprised to see Harvick in Victory Lane Saturday night.

Truex Jr. has been a beast on the 1.5-mile tracks since the last spring race at Kansas. Truex won four races (Las Vegas, Chicago, Darlington and Charlotte) and he has led 717 laps at these tracks. He has a series-best driver ranking, a 5.3 average finishing position and a 7.3 average running position on the intermediate tracks this season. The No. 78 car has scored the third-most points in Yahoo Fantasy Auto Racing on the intermediate tracks in 2017. I plan to use Truex at all of the 1.5-mile tracks this year.

The smart play for Group B is to select the drivers who have run well at the intermediate tracks this year. There are five drivers to choose from and I will need four of them for my team.

Kyle Larson and Chase Elliott are by far the best choices in Group B this week. Both drivers have run up front in all of the intermediate track races in 2017. Clint Bowyer and Jamie McMurray are competing at their home track Saturday night. Neither driver has won at Kansas but both have run well this season. Ryan Blaney has two finishes in the top 10 in his three starts at the track. He is also a good choice for your team.

Some other drivers to consider are Kurt Busch, Kasey Kahne, Ryan Newman and Trevor Bayne. They have had success at Kansas before but their results on the intermediate tracks are not as impressive as the list of drivers above.

Should I just write that Larson will finish in the top two and move onto the next pick? That is pretty much been the story with the No. 42 car this season on the intermediate tracks. Larson finished second at Atlanta, Las Vegas and Texas and won the race at Auto Club Speedway. His stats at Kansas are not the best but they were not very good at any of the other tracks he finished in the top two. Larson is another driver I plan to use at the 1.5-mile tracks this season.

Elliott has been a top-10 machine on the 1.5-mile tracks. His average finishing position in the last five intermediate track races is 6.4. Kansas is not one of his best tracks but his resume is too short to rely on. Elliott is getting closer and closer to winning his first race. Ricky Stenhouse Jr. made it to victory Lane for the first time last week. Elliott’s turn should come in the near future.

I will be at the track this week and this is the driver I will be cheering for. The fans at Kansas would love to see Bowyer go to Victory Lane at his home track. He came close in 2007 when he finished second. Bowyer is having a career year and I am willing to bet Stewart-Haas Racing put in some extra effort this week to ensure the No. 14 car can run up front Saturday night.

Another driver who will be trying to win his first race at his home track is McMurray. The Joplin, Missouri native has not run well at his home track but his cars have not been this fast. McMurray has been consistent on the 1.5-mile tracks this season. He finished 10th at Atlanta, 8th at Las Vegas and 7th at Texas. He should finish in the top 10 again this week.

There are only three really good options in Group C this week. Erik Jones, Daniel Suarez and Ty Dillon have all run well on the intermediate tracks this season. Each of them should run well Saturday. If you really want to be contrarian you can use Michael McDowell. I doubt he will finish inside the top 20 but he should be good for a top-25 finish.

Jones is a rookie but he does have experience at Kansas. He filled in for Kyle Busch in 2015 in the No. 18 car. Jones usually runs well in the race and then fades at the end. As soon as he gets used to the longer races he should start finishing in the top 10. Jones will learn a lot from his teammate, Martin Truex Jr. this week. Fantasy teams should expect another top-15 finish from the No. 77 Saturday night.

It is hard to believe but Dillon has outscored Erik Jones and Daniel Suarez on the intermediate tracks this season. He has also outscored Matt Kenseth, Denny Hamlin, Kurt Busch, Ryan Newman and Kasey Kahne. The reason why he has been so good is because Dillon has been so consistent. Dillon has completed every lap on the intermediate tracks and has an average finishing position of 17.6. He should easily finish inside the top 20 Saturday night.