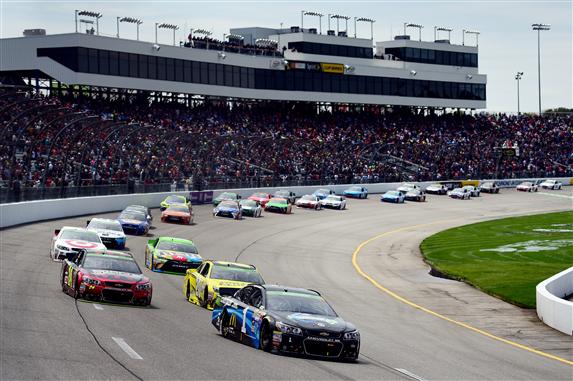 The Monster Energy NASCAR Cup Series travels to Richmond, Virginia this week for the Toyota Owners 400. The race can be seen Sunday at 2 p.m. ET on Fox. Be sure to test your fantasy NASCAR skills in the Yahoo Fantasy Auto Racing game.

The race Sunday will be one of the shortest races of the season. The 400 lap race is only 300 miles in length. Drivers will not have a lot of time to make their way to the front so track position will be important this week.

Richmond is a short track but the only track I compare it to is Phoenix. The setup used in the cars at Phoenix will be similar to the setup required this week. The drivers who performed well in the desert should run up front Sunday.

Most of the Fantasy NASCAR “experts” simply use a driver’s past success at a track to determine who to pick each week. While this is important; it is also important to look at momentum. The drivers who have been running well the past 4-5 races continue to run well regardless of the tracks size or shape. Be sure to check out my article about the drivers who have scored the most points in the Yahoo Fantasy Auto Racing game in the last five races. You can read it here: Yahoo Stats

The question that needs to be answered in Group A is: What should we do with Kyle Busch? He is obviously the best choice if you simply go off of the stats at Richmond but the No. 18 team has more problems than I can count on one hand. Is this the week Busch goes to Victory Lane or is he fool’s gold once again?

There are many other good choices in Group A if you do not trust Busch. Kevin Harvick and Denny Hamlin have been two of the best drivers at this track. Martin Truex Jr. dominated the last race at Richmond and the No. 78 car shows no signs of slowing down. Joey Logano has been the most consistent driver at Richmond and he is the safest pick in the field this week. Jimmie Johnson is finally over his post-championship hangover and now looks like the driver with his face carved on the Mount Rushmore of NASCAR.

Busch has been money at Richmond in the last four races at the track. Busch has a series-best 117.6 driver rating and a series best 4.3 average finishing position in the last four races at Richmond. He should have won this race last year but his teammate (Carl Edwards) pushed him out of the way to get to Victory Lane. Edwards was his biggest competition so without him in the race Busch will be the favorite to get the win Sunday. This track requires a similar setup to Phoenix and Busch dominated that race. I know if I do not have him on my team Busch will lead 200 of the 400 laps Sunday. Better to be safe than sorry.

The last pick for Group B came down to Kevin Harvick, Martin Truex Jr. or Joey Logano. Harvick has the best stats at Richmond but he has be inconsistent this season. Truex led the most laps in the last race at Richmond and he said after the race that Joe Gibbs Racing really helped him with his setup at the track. Since I plan on using Kyle Busch in the race I needed a driver for qualifying points. Logano has won the pole for two of the last four races at Richmond and he won the pole at Phoenix earlier this season. He will have a good chance to start up front Sunday and earn your team bonus points for qualifying.

Logano has also been consistent in the races at Richmond. He has six consecutive top 10 finishes at the track. Logano has also finished seven of the eight races this season in the top six. The No. 22 car is a good compliment driver to Busch this week.

My goal this week is to save an allocation with Kyle Larson and Chase Elliott. After a horrible race last week I need points so I am adding Larson to my team as an insurance policy. Elliott ran well at Phoenix (led 106 laps) but his stats at Richmond at not great. I will leave the No. 24 car off my team and hope my other three drivers qualify up front and look good in the practice sessions.

Larson has been the best driver in the sport this season. If he was in Group A he would still be the best choice. The No. 42 team has run well in every race this season and there in no reason to believe they will not lead a lot of laps Sunday. I know I want to use him in the two races at Michigan and the final race at Homestead. That only leaves me four allocations to play with. My other Group B drivers should run well this week but it is nice to have a golden ticket in your pocket just in case something goes wrong.

Bowyer is like a kid with a new toy this year. He has really performed well with his new team. Bowyer ran well at Richmond when he drove for Michael Waltrip Racing. He had an average finishing position of 8.8 in his seven races at the track. His car will be better this week than what he had at MWR. I would not be surprised if Bowyer went to Victory Lane Sunday.

Newman should run well this week. Since he won the race at Phoenix he will be able to gamble in the pits and gain track position if his car is not fast enough to run up front. That strategy worked for him a PIR and it could work again. Newman runs well at Richmond when Richard Childress Racing gives him a fast car. The No. 31 team should be fast enough to finish in the top 10 this week.

There are only three good choices in Group C this week. Erik Jones, Daniel Suarez, and Ty Dillon will have the best chance to finish in the top 15. Jones will probably finish in the top 10 but I am down to 6 allocations with the No. 77 car so I will save him for the intermediate tracks.

Dillon has never competed in a Cup Series race at Richmond but he has eight starts at the track on his Xfinity Series resume. Dillon finished six of the eight races in the lower series in the top 10, including a second-place finish last year. Dillon finished 16th at Phoenix and I expect similar results from the No. 13 team Sunday.

Suarez will be driving the car that won this race last year. That is enough to put him on my radar this week. Suarez has never competed in the Cup Series at Richmond but he does have five races at the track on his Xfinity Series resume. His average finishing position at the track is 9.8. I know if I select Erik Jones for my team I will be tempted to use him in the race, so I will eliminate all temptation and go with Suarez at Richmond.