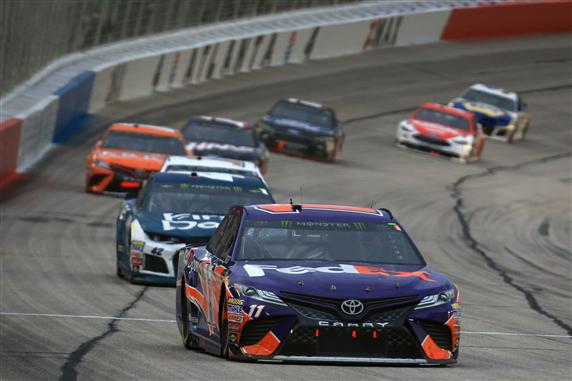 The “Best Bets” have hit in a couple of races and they missed the mark in some others. I expected Martin Truex Jr. to run well at Phoenix, but there were no signs of the No. 19 car dominating the race and going to Victory Lane. I guess that is the kind of season we are going to have in 2021.

The race at Atlanta Motor Speedway could be different though. There is an art to making fast laps at Atlanta. Pure speed is not going to get a driver the checkered flag if he cannot properly search the track for grip and save his tires over the long run. These teams are going to need a fast pit crew too, because the race this week is 500 miles and that means there will be 12+ four-tire pit stops.

The Folds of Honor Quick Trip 500 should be a four-horse race. The only drivers to win at Atlanta since 2016 had the names Kevin Harvick or Brad Keselowski on their windshield. These two drivers are going to be locks for top-10 finishes Sunday, but I like two other drivers (Martin Truex Jr. and Kyle Larson) to compete for the win. There is also a two value picks and a sleeper worth taking a shot with this week. 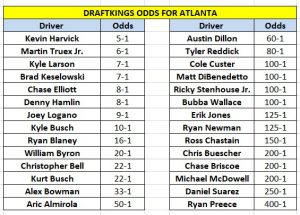 ** The first number is the amount of money based on the second number (the amount of the wager). So if you bet $1 on Martin Truex Jr., you will win $6.

Here are my “Best Bets” for the race at Atlanta…

Martin Truex Jr. (6-1): Martin Truex Jr. will have momentum after his win at Phoenix and the No. 19 car was the fastest at Atlanta last year. Truex started 11th and immediately went to the front. He won both Stages and led 65 laps. The team over-adjusted the car on the final pit stop or Truex would have been in Victory Lane last year. It will also help that Truex is running the Xfinity Series race Saturday, so he will get an idea of how the tires wear throughout the race. Truex is my pick to win, so I have to bet him Sunday.

Kyle Larson (7-1): I expected Kyle Larson to enter the 2021 season with a lot of fire to run well with his new team, but I did not expect the No. 5 car to be the most dominant car on the 1.5-mile tracks this season. Larson finished 4th at Homestead and then led 103 laps and won the race at Las Vegas. Larson did not compete in the Cup Series race at Atlanta last year because he was suspended, but he spanked the field in 2019. Larson led 142 laps and just like Martin Truex Jr. last year, a poor pit stop prevented him from winning the race. Larson will have more speed and a better pit crew with Hendrick Motorsports than he had with Chip Ganassi Racing. It is going to be tough to keep Larson out of Victory Lane Sunday.

Kurt Busch (22-1): Kurt Busch has won a race in 7 consecutive seasons. His best chance to extend his streak will be at Atlanta. This is by far his best track. The No. 1 car failed inspection 3 times before the race last year. Busch had to serve a pass-through penalty to start the race. He went 2 laps down. Busch made short work of the drivers in the back of the field and raced his way to a 6th-place finish. Just think how Busch would have finished if he did not give the field a two–lap head-start. Busch is a good bet at 22-1.

Alex Bowman (33-1): There are a few reasons to like Alex Bowman Sunday. Hendrick Motorsports has been the fastest teams in the 550 HP aero package on the 1.5-mile tracks. William Byron won at Homestead and Kyle Larson won at Las Vegas. It could be Bowman’s turn to go to Victory Lane Sunday. His 2 wins in the Cup Series came at 2 intermediate tracks where saving tires is the key to winning (Chicagoland Speedway and Auto Club Speedway). Now he gets to see what he can do at Atlanta. I will take a shot at 33-1 odds.

Long-Shot Special: My Long-Shot Special this week is Tyler Reddick (80-1). Reddick was OK last year in this race. He started 24th and finished 16th. That is a long way from Victory Lane though. Reddick finished 2nd at Homestead and he probably would have won if there were 10 more laps in the race. His No. 8 Chevy is going to have speed and Reddick has the talent to get to the front. Richard Childress Racing stole a race last year (Austin Dillon at Texas) and they could do it again this week with Reddick. I could see Reddick stopping early for fresh Goodyear’s and making up a lot of track position. I will bet $2 on him at 80-1 odds.