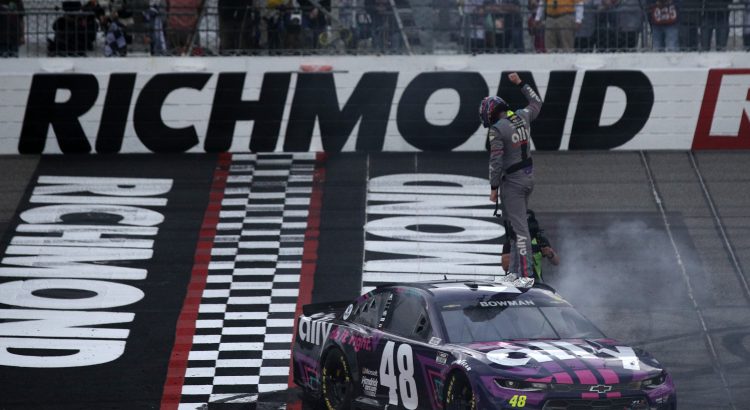 The first race in the 2021 NASCAR Cup Series playoffs is in the books. There were a lot of wrecks and a lot of the top drivers had to go to the garage. That did not prevent the favorite from taking the checkered-flag. Denny Hamlin and Kyle Larson were the favorites and they were the two drivers competing for the win. It will likely be tough for a long-shot to win the race at Richmond, but anything is possible.

Most of the last nine races at Richmond have been won by drivers who were listed as one of the top-three favorites. Martin Truex Jr. won twice, Kyle Busch has twice, Denny Hamlin won once, Brad Keselowski won once, Joey Logano won once and Kyle Larson won once. The biggest long-shot was the winner in April’s race. Alex Bowman was listed as 35-1 and he found Victory Lane. Maybe the same thing can happen Saturday night. 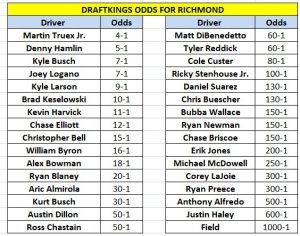 Here are my “Best Bets” for the Federated Auto Parts 400…

Denny Hamlin (5-1): Many drivers say that the hardest race to win is your first. Hamlin finally found Victory Lane for the first time with his win last week at Darlington. Now, he could win multiple races in the playoffs. That will include a win at his home track in Virginia. Hamlin led the most laps and he finished 2nd at Richmond in April. I was surprised he was not the favorite Saturday night. I will bet Hamlin at 5-1 odds.

Kyle Busch (7-1):  Kyle Busch sucked last week. Those are his words, not mine. Now he is in a hole and needs a win or a top-three finish to climb out of it. He may get it Saturday night. Busch has a series-best 4.3 average finishing position in the last 6 races at Richmond. He won both races at Richmond in 2018 and he finished 2nd in 2019. I expect Rowdy to be a threat to win Saturday night.

Brad Keselowski (10-1): Is Brad Keselowski a lame duck? Some people think that Team Penske gave up on Keselowski since he is leaving the organization at the end of the season. I do not think that is the case. Keselowski has been one of the best drivers on the short, flat tracks this season. He finished 4th at Phoenix and 3rd at New Hampshire. He also won this race last year. I will take a shot with Keselowski at 10-1 odds.

Christopher Bell (15-1):  I thought about betting on the last race winner at Richmond, Alex Bowman, but I noticed the Casinos are trying to temp us to put our money behind the No. 48 car. His odds are good (18-1), but I am not taking the bait. Instead, I will add another car from Joe Gibbs Racing to my portfolio this week. Bell started 8th and finished 4th at Richmond in April. He had one of the fastest cars at the end of the race. I expect the No. 20 car to be up front again Saturday night.

Long-Shot Special: My Long-Shot Special this week is Aric Almirola (30-1). Who won the last race on a short, flat track? If you guessed Almirola, you would be right. Almirola won the race at New Hampshire in July. It wasn’t a fluke either. He also finished 6th at Richmond in April and he finished 8th in this race last year. 30-1 odds are too good to pass up on with Almirola.