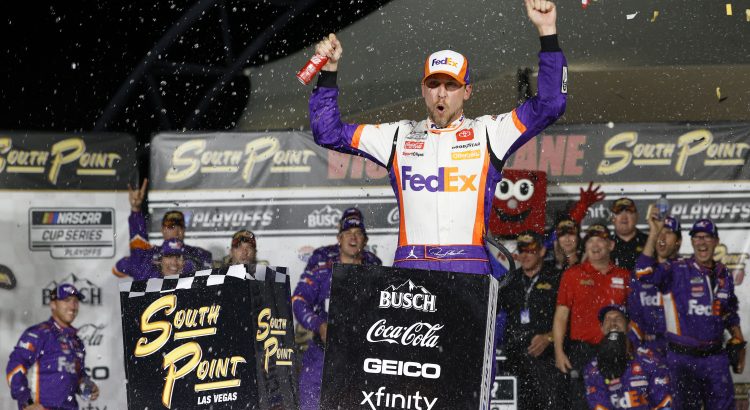 The NASCAR Cup Series will be traveling out west this week to start the Round of 8 in their playoffs at Las Vegas Motor Speedway. The drivers who have won on the 1.5-mile tracks this year (not including Atlanta since it is a Superspeedway now) include: Alex Bowman at Las Vegas (16-1 odds), Kurt Busch at Kansas (18-1 odds), Denny Hamlin at Charlotte (12-1 odds), Bubba Wallace at Kansas (20-1 odds) and Tyler Reddick at Texas (18-1 odds). The average odds of the race winners on the 1.5-mile tracks this year is 16-1. DraftKings started to adjust their odds this week by adding more drivers inside the 10-1 odds range and more drivers above the 25-1 range. I still like many of the driver priced 12-1 to 15-1 this week. 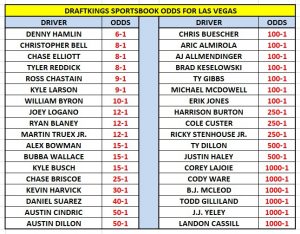 ** The first number is the amount of money based on the second number (the amount of the wager). So if you bet $1 on Denny Hamlin, you will win $6.

Here are my best bets for the race at Las Vegas…

TYLER REDDICK (8-1): Reddick is my pick to win Sunday. He had the fastest car at Kansas last month. He posted the fastest speed in practice on the single-lap and long-runs speed charts and then went out and won the pole. Reddick was winning the race in the Heartland before he got a flat tire and hit the wall. Reddick bounced back at Texas two weeks later and once again dominated practice and won the race. The No. 8 car has been the fastest in the playoffs on the 1.5-mile tracks so I will bet on Reddick to win Sunday.

WILLIAM BYRON (10-1): I looked at the data from the two races on 1.5-mile tracks in the playoffs (Kansas and Texas) and I looked at the data from the previous race at Las Vegas. The stats is used suggest Byron will be in Victory Lane Sunday. He has a series-best 110.1 Driver Rating and a series-high 6th-place average finishing position in these races. Hendrick Motorsports dominated the first race in Sin City. If they bring the same speed to the track Sunday, Byron will have a great chance to be in Victory Lane.

MARTIN TRUEX JR. (15-1): Can the Cup Series get to 20 winners before the season is complete? I think they can and I am betting on two drivers who have not been to Victory Lane this season. Truex has dominated in Sin City. He only finished one race at Las Vegas outside the top-10 since 2016. That includes wins in 2017 and 2020. I know that is a different car, but Truex also was leading the race two weeks ago at Texas when he had a tire blow out. He should have won that race, so I will bet his luck changes in Las Vegas.

RYAN BLANEY (15-1): Here we go again…. I am having a hard time believing Blaney is going to go winless in 2022 so I am going to bet on him every week until he finds Victory Lane. Maybe I am throwing money away, but his No. 12 car has been too fast to not win this year. Las Vegas has historically been the best track for Team Penske. Brad Keselowski and Joey Logano won five races at the track since 2016. Blaney finished 9th at Kansas and 4th at Texas in the playoffs. He just needs a bit more luck to win a race this year.

LONG SHOT SPECIAL KEVIN HARVICK (30-1): There are a lot of reasons why Harvick is 30-1 odds this week. He likely will be without his Crew Chief Rodney Childers because of a suspension following the race at Talladega and Harvick has not won on a 1.5-mile track since his win at Atlanta in 2020. This is Kevin Harvick though. Would anyone really be surprised if he won the race Sunday? He finished 3rd at Charlotte earlier this year, so Harvick has shown he can run up front on the 1.5-mile tracks. Drivers do not need the fastest car in 2022. They just need to survive the chaos, get lucky with pit strategy and be mistake free during the race. I will bet this is the week it all comes together for Harvick.