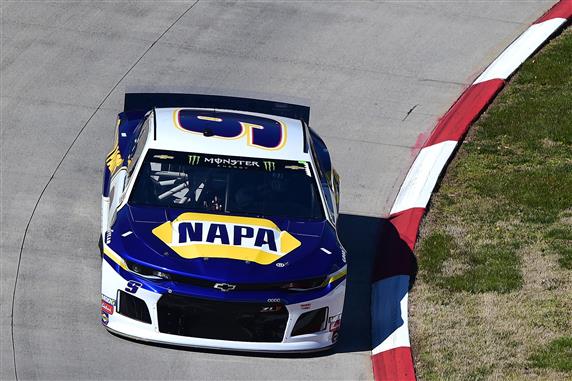 The NASCAR Cup Series took a week off and now it returns for a Saturday night short, track race at Martinsville Speedway. It doesn’t get much better than that. This race always has a lot of excitement and a lot of hot tempers after the race. Fans get just excited to see who will get punched in the mouth as they are which driver will be holding the checkered flag after the race. The Blue-Emu Maximum Strength Pain Relief 500 can be seen Saturday at 7:30 p.m. on FS1.

While the short track racing under the lights is fun to watch, it is not great for betting purposes. Three drivers have dominated all of the races at Martinsville in the current aero package. Those drivers are Martin Truex Jr., Chase Elliott and Brad Keselowski. They are also the three favorites to win Saturday night. Truex, Elliott and Keselowski have won every race in the current aero package at Martinsville and led 1,465 of the 2,000 lap. It might be a good idea to simply bet the three favorites this week, but there is some value to take advantage of too. Here are the other drivers I like… 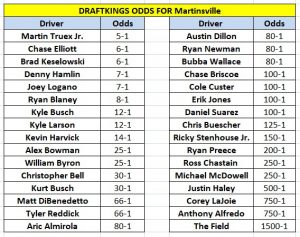 ** The first number is the amount of money based on the second number (the amount of the wager). So if you bet $1 on Martin Truex Jr, you will win $5.

Here are my “Best Bets” for the race at Martinsville …

Joey Logano (7-1): Joey Logano is no stranger to Victory Lane at Martinsville. He won the race in 2018 and he should have won in 2015, but Matt Kenseth decided to pay off a debt and send Logano into the wall. The No. 22 car will start on the pole and track position is very important at Martinsville. Logano as has the fastest pit crew this season. He should be able to keep his track position from the No. 1 pit stall. I will put some cash on Logano this week.

Ryan Blaney (8-1): Ryan Blaney has not been to Victory Lane at Martinsville…yet, but Team Penske is very good at this track. Blaney finished 2nd at Martinsville last June and he returned in November and finished 2nd again. I only need him to improve by one position to pay off Saturday. 8-1 odds are not bad for Blaney from the 4th starting position in this race.

William Byron (25-1): William Byron is not the first name that comes to mind when people think about racing at Martinsville but I like what I have seen from the No. 24 team this year. Byron finished 2nd at Martinsville in 2019 so he knows how to run fast laps at this tricky track. If he learned anything from Chase Elliott, Byron could be in Victory Lane Saturday night.

Kurt Busch (30-1): I love the odds for Kurt Busch for this race. Yes, the No. 1 team is in a slump right now but most of his poor results were not his fault. Martinsville is a driver’s track and Busch knows the rhythm it takes to pass car and get to the front. Busch finished 5th and 9th in the two races at Martinsville last year. A gamble in the pits could get Busch the extra positions he needs to win the race Saturday night.

Long-Shot Special: My Long-Shot Special this week is Daniel Suarez (100-1). The No. 99 Trackhouse Racing team is the real deal this year. Their cars are made by Richard Childress Racing and they have the new Hendrick/Childress Racing Engines. Suarez finished 9th at Martinsville while racing for Joe Gibbs Racing and 10th while racing for Stewart-Haas Racing. He nearly won the Bristol Dirt Track Race so I will take a chance with him at 100-1 odds.