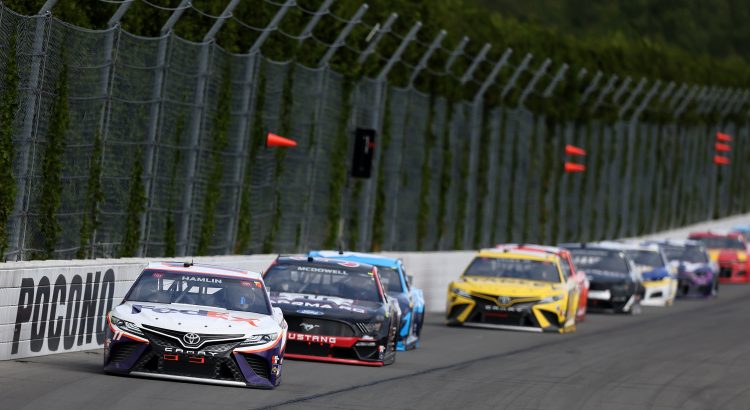 The NASCAR Cup Series will compete at the “Tricky Triangle” Sunday. After competing in back-to-back races on back-to-back days for the past two seasons at Pocono, the track only has one race this year. It is going to be a tough race to handicap too. The Gen-7 car has not raced on any tracks similar to Pocono, so we have limited data to use to help predict which drivers will have speed at Pocono. Fuel strategy will likely come into play Sunday and that will just complicate this race even more.

The Best Bests have been on fire. They won with Christopher Bell (28-1) at New Hampshire, Tyler Reddick (25-1) Road America, Joey Logano (16-1) at WWT Raceway and Daniel Suarez (25-1) at Sonoma. That is four winners in the last six races. The race Sunday is going to be tougher to predict, but I will do my best to get us another winning ticket.

Most teams treat Pocono like a road course race. Some teams will stay on the track to get Stage Points and others will pit early at the end of Stage 2 to get track position in the final Stage. The teams that will give up the Stage Points for track position will be the teams without a win this year. I will have a lot of drivers who are in a “must win” situation this week. 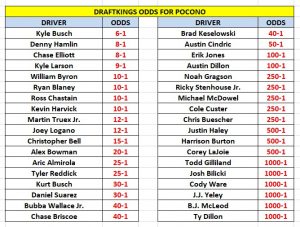 ** The first number is the amount of money based on the second number (the amount of the wager). So if you bet $1 on Kyle Busch, you will win $6.

CHASE ELLIOTT (8-1): Elliott has been on fire all summer. He finished 2nd, 1st, 2nd and 1st in his last four races. Elliott could easily be entering the race at Pocono with a four race win streak if he did not have mistakes at Road America and last week at New Hampshire. Pocono is not one of his best tracks but neither was the Magic Mile. The No. 9 team has something figured out with the Gen-7 car so I will keep betting Elliott until he cools off.

RYAN BLANEY (10-1): I like betting the drivers who haven’t been to Victory Lane because this is an easy race to use pit strategy to pick up track position and put the driver in a position to win. Blaney is 15th in the Playoff Standings and he is the highest driver without a win. His points don’t mean anything if there are two more winners. Blaney won his first race of his Cup Series career at Pocono in 2017. I will bet on the Roush-Yates Horsepower this week and take a chance with Blaney.

KEVIN HARVICK (10-1): Harvick had an awesome race last week and he dropped in the Playoff Standings. That has to be so frustrating for the No. 4 team. I am hoping it motivates the team to get a win so they can forget about the points. Harvick has been an absolute stud at the Tricky Triangle. He finished 4th, 8th, 2nd, 1st, 6th, 22nd (wreck), 4th, 4th, 2nd 2nd, 4th and 9th at Pocono since he joined Stewart-Haas Racing. Crew Chief Rodney Childers knows how to set up a car for Pocono and Harvick knows how to drive the car to the front. He should be a good bet this week.

MARTIN TRUEX JR. (12-1): Truex is another driver who has not been to Victory Lane yet this year. He has been closer than any other driver though. Truex has scored the most Stage wins in the Cup Series. He just needs to figure out a way to win the final Stage. Truex has two wins at Pocono. That includes the last race that was 160 laps (like the length of this week’s race). 12-1 odds for Truex seem to be pretty good this week.

KURT BUSCH (30-1): Busch has been on my betting slip many times this year and I will continue to add him if DraftKings continues to have his odds at +2500 and longer. Busch is too good to have odds like this. Busch has three wins and 11-podium finishes at Pocono. The No. 45 team nearly used pit strategy to win the race last week. I will bet that they can get the job done Sunday.

LONG SHOT SPECIAL: BUBBA WALLACE (30-1): I know this will not be a popular pick but hear me out… Pocono has been a good track for Wallace. He had a few top-10 finishes at Pocono in the Truck Series and he finished 5th in this race last year. Wallace is running better in 2022 than he was in 2021. Wallace has some momentum after his 3rd-place finish last week. We have seen some strange winners in Victory Lane (Chris Buescher in 2016, first time winner Ryan Blaney in 2017 and Alex Bowman last year). Wallace could do the same Sunday.

* This week I went out and made a bet on Kevin Harvick to win the championship. Sounds like throwing money out the window, right? The No. 4 team has come to life ever since they made changes to their pit crew. Harvick has finished four of the last five races in the top-10 since the change, with an 8.2 average finishing position. His odds to win the Championship on DraftKings are 30-1. The odds will not stay at 30-1 if he secures a spot in the playoffs. We all know how good Harvick is at Phoenix. You do not need to bet a lot to win a lot with the No. 4 car. A $5 bet returns $150 profit. Not a bad gamble IMO.