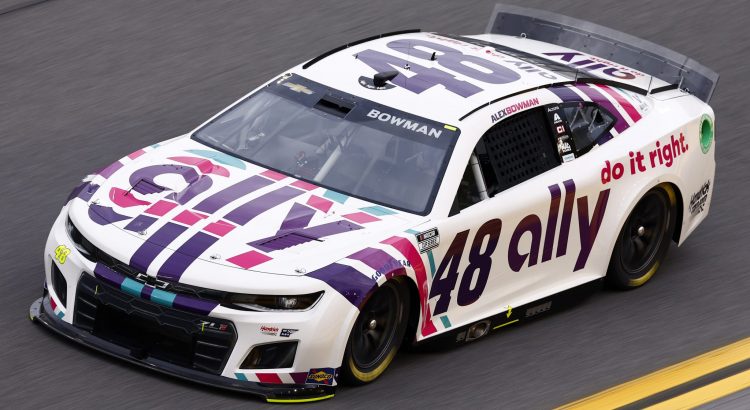 The Best Bets hit last week with Ross Chastain at 25-1 odds. This is clearly the year of the long-shot until the odds-makers adjust the lines and start making the young drivers the favorites and moving the veterans down the list of drivers to win the race. So far that has not happened. They still have Martin Truex Jr., Joey Logano, Kyle Busch and Denny Hamlin at the top of the board. Also, I am not sure why Kyle Larson is the favorite. Richmond is one of his worst tracks, but you can never count out the No. 5 team. 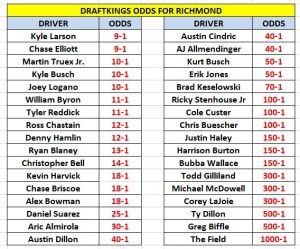 ** The first number is the amount of money based on the second number (the amount of the wager). So if you bet $1 on Kyle Larson, you will win $9.

Here are my best bets for the Toyota Owners 400…

TYLER REDDICK (12-1):  If a driver keeps knocking on Victory Lane’s door, sooner or later he is going to find his way through that door. Reddick has been so close to winning almost every race this year. Could this be the week when he earns his first Cup Series win? I think it could be. He finished third on the short, flat track at Phoenix and he had the best car at the short, flat track at the L.A. Coliseum. Reddick should be fast Sunday and have another chance to get the No. 8 car to Victory Lane.

ROSS CHASTAIN (12-1):  I won with Chastain last week so am I messing with fire by going back to him Sunday? Absolutely not! Chastain has a great chance to win back-to-back races. Remember the hot streak Kyle Larson was on last year? Chastain is on a similar streak. He finished third (Las Vegas), second (Phoenix), second (Atlanta) and won last week at COTA. Chastain finished second at the short, flat track in Phoenix. He certainly has the speed to improve by one spot Sunday. If the name on the windshield of the No. 1 car said Larson, the odds would be 4-1.  I’ll take a chance with Chastain again this week.

RYAN BLANEY (13-1): I know the stats for Blaney at Richmond are nothing to write home about, but come on… 13-1 odds on the fastest car in the field? Blaney leads the Cup Series in Driver Rating, Green Flag Speed, Average Running Position, Laps Led, Fastest Laps and Green Flag Passes. It is amazing that he has not won a race yet. Blaney led a race-high 143 laps and finished fourth at the short, flat track in Phoenix. He is my pick to win this week.

CHASE BRISCOE (18-1): The most similar track on the schedule that the Cup Series competed at this season is Phoenix Raceway. It only makes sense to bet the driver who won the race at Phoenix, right? I think so. Getting Briscoe at 18-1 odds feels like stealing. It is not like he “backed his way into Victory Lane” at Phoenix. Briscoe has been fast in nearly every race. I will take my chances with the No. 14 car being up front with a chance to win Sunday.

ALEX BOWMAN (18-1): I really thought the odds on Ross Chastain and Ryan Blaney were ridiculous until I saw the odds on Bowman. He has won the second-most races in the Cup Series over the last year and he is the defending race winner of the Toyota Owners 400. I really do not care if Bowman only leads one lap in the race. The fact is that he is really good at making sure the lap he leads is the last lap in the race. He finished second last week. I will bet that he can win Sunday.

Long Shot Special: KURT BUSCH (50-1):  To be honest I do not like the drivers listed below Alex Bowman but I will bet a few bucks on Busch at 50-1 odds. The Toyotas have been behind on speed this year, but Busch has been their best driver. He has the best average finishing position from the Toyota cars and the fifth-best average finishing position in the Cup Series. Busch finished fifth at the short, flat track in Phoenix. He only needs to move up five spots to win me a lot of money this week. Not a bad bet in my opinion.