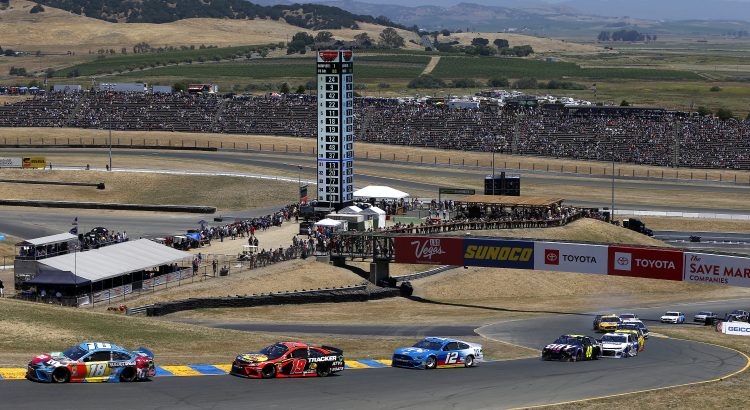 The NASCAR Cup Series will travel back to the west coast this week to compete at Sonoma Raceway. This is another good chance to cash a ticket at the pay window. The Best Bets hit again last week with Joey Logano at 16-1 odds. It is going to be tough for a long-shot to find Victory Lane Sunday because Sonoma is the most difficult road course on the schedule. Only five active drivers have ever won at this track (Martin Truex Jr., Kyle Busch, Kurt Busch, Kyle Larson and Kevin Harvick). Maybe the Gen-7 car will give other drivers an opportunity to win the Toyota / Save Mart 350. 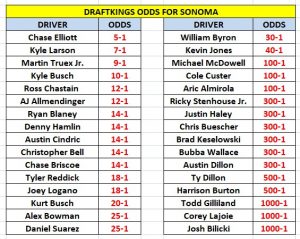 ** The first number is the amount of money based on the second number (the amount of the wager). So if you bet $1 on Chase Elliott, you will win $5.

MARTIN TRUEX JR. (9-1): Truex is a lock to go to Victory Lane Sunday if this race was determined by stats. The No. 19 car finished 3rd, 1st and 1st in his last three races at Sonoma. It would have been three wins and a 3rd-place finish if his engine did not expire in 2017 when he had a 5 second lead over the field. Truex has a series-best 132.9 Driver Rating and led a series-high 59 laps in the last two races at Sonoma. Truex has not won yet this year and I think he gets the job done Sunday before he (may) announce his retirement next week.

KYLE BUSCH (10-1): There are a lot of reasons to like Rowdy this week. He has been on fire for the last month with finishes of 2nd, 2nd and 3rd in his last three races. Now he gets to work on his skills at Sonoma in the Truck Series race Saturday. Busch is always better in his Cup Series car when he competes in a lower-level series race. Busch has finished four consecutive races at Sonoma in the top-five. I will bet that he can win the race Sunday.

AJ ALLMENDINGER (12-1): I have been saying for years that Allmendinger in the best road course racer in NASCAR. He does not have the stats that Chase Elliott has but if Allmendinger ever got behind the wheel of a Hendrick Motorsports car on a road course, the rest of the field would not have a chance. Allmendinger won the Xfinity Series road course race last week in Portland. I will bet that he can win the Cup Series race in Sonoma.

DENNY HAMLIN (14-1): Hamlin will have a good chance to win Sunday if he can focus on driving and stop dicking around with other drivers during the race. He has never won at Sonoma, but he handed the race to Tony Stewart in 2016. Hamlin has 5 consecutive top-10 finishes at Sonoma. 14-1 odds seem too good to pass up on the driver with the 4th-best average finishing position at Sonoma.

JOEY LOGANO (18-1): We won with Logano at 16-1 odds last week. Can we do it again this week at 18-1 odds? I think there is a chance. Logano was a beast on the road courses last year. He finished 2nd at the Daytona Road Course, 3rd at COTA, 7th at the Charlotte Roval and 4th at Sonoma. Logano does not need to have the fastest car this week. He just needs to keep the No. 22 car in the top-10 and let crew chief Paul Wolfe use pit strategy to get Logano to the front. I think it could happen so I will put some cash on it.

KURT BUSCH (20-1): Usually I only list 5 drivers in my Best Bets but I cannot pass up the other Busch Brother at 20-1 odds. Busch has been on a hot streak like his brother. He won at Kansas last month and finished 3rd last week at WWT Raceway. Now Busch gets to compete at Sonoma. He has finished 5 of the last 6 races at this track in the top-10. That includes a 6th-place finish last year. His 23X1 Racing car, built by Joe Gibbs Racing, will have more speed than what he had last year with Chip Ganassi Racing. I will take a chance with the No. 45 car Sunday.

* The cream typically rises to the top at Sonoma so I am not dipping deep into the odds this week to find a long-shot bet. I will be placing $2 bets on Daniel Suarez and Michael McDowell because they are good on road courses, but I am expecting to be donating the $4 to DraftKings Sunday.