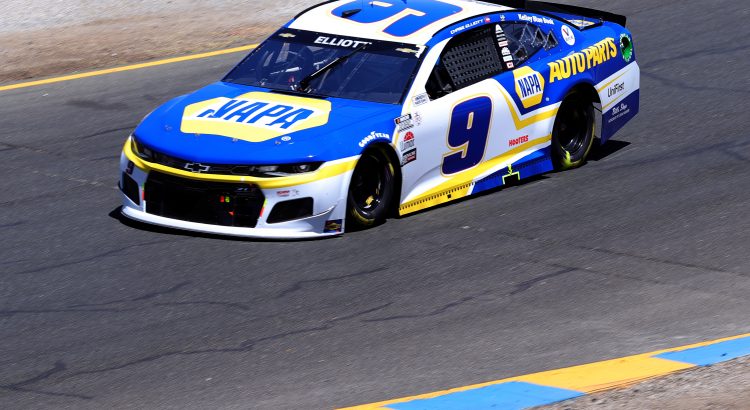 The NASCAR Cup Series travels back to the west coast this week to compete at Sonoma Raceway. This will be the second of six races this season on the road courses. Sonoma is the most technical of the road courses on the schedule so it will be interesting to see how the Gen-7 car, with its independent rear suspension is able to navigate this track. The Toyota / Save Mart 350 can be seen Sunday at 4 p.m. on FS1.

The strategy for Sonoma is not too difficult. The days of the “road course ringers” showing up at the road courses and running up front are over. All of the drivers know how to navigate the road courses thanks to the accuracy of the simulators they get to practice on. Most of the drivers can finish up front on most of the road courses but Sonoma is different. The elevation chances and tight corners make this track very difficult to navigate. It takes a special skill set to finish up front and a smart crew chief to use the correct fuel strategy to gain track position. That is why we consistently see the same drivers run well at Sonoma. Track history is very important this week, so use the drivers with a history of running well at Sonoma.

This is a good week to chance bonus points for qualifying. There are a few drivers who are very good at turning fast laps when they have the only car on the track so I will have these drivers in my lineup for qualifying points this week. Remember, we do not lose an allocation with these drivers if we do not use them in our starting lineup Sunday.

Here are the picks for the Toyota / Save Mart 350… 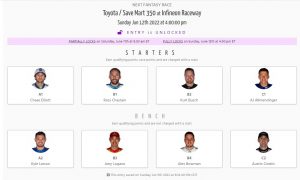 CHASE ELLIOTT (8): The reason why I save my allocations with Elliott is so I can have him in my starting lineups at the road courses. Elliott has won four of the last 10 road course races and he has been very good in wine country. Elliott has not won at Sonoma “yet”, but he consistently runs up front. Elliott averaged 31 laps led in his five races at the track. I will use an allocation with the No. 9 car Sunday.

KYLE LARSON (5): Larson won the race at Sonoma last year but that is not why the No. 5 car is in my lineup. Larson has also started on the pole in his last four starts at Sonoma. He is almost a lock to win the pole Saturday and score our team 10 bonus points. My plan this week is to use Larson for qualifying points and Chase Elliott in the race. That should give use the best chance to score the maximum amount of points from our Group A drivers.

ROSS CHASTAIN (6): Sonoma is a tough track that requires the drivers to be focused to hit their marks in every turn. So how mentally focused will Chastain be after he wreck so many driver at WWT Raceway? If he is on his game, Chastain should be a good pick. He won the race at COTA and he finished seventh at Sonoma last year. His Trackhouse Racing Chevy has more speed than his Chip Ganassi Racing Chevy had last year. The only thing stopping Chastain from running up front is his fear of racing too aggressively again.

KURT BUSCH (8):  Busch got off to a slow start with his new team but he is starting to heat up now. He finished two of his last three races in the top-three. Now Busch gets to compete at a track where he has had some success at. His average finishing position since 2011 at Sonoma is 5.8. That is ridiculous consistency at a tough track. I plan to use one of my eight allocations with Busch Sunday.

ALEX BOWMAN (7): Bowman is not the first name that comes to mind when you think of road course racers but is Bowman at the top of the list at any track? The stats suggest Bowman should be one of the safest picks in the field Sunday. The No. 48 car finished second at COTA this year and Bowman has the fourth-best average finishing position in the last 10 road course races. Bowman finished ninth at Sonoma last year and he should finish in the top-10 again Sunday.

JOEY LOGANO (5): The last spot in Group B was tough. Christopher Bell, Tyler Reddick and Chase Briscoe have all had success on the road course but not too much success at Sonoma. It is not a bad idea to take a chance with one of these drivers but I want to play it safe and have Logano as a backup plan this week. Logano has had a lot of success at Sonoma. He finished fourth at the track last year and he will have momentum after his win last week. I do not want to use Logano Sunday but I will if the other drivers I have in Group B struggle.

AJ ALLMENDINGER (6): Allmendinger is running a limited schedule for Kaulig Racing this year. He is scheduled to be behind the wheel of the No. 16 car at all seven road course races. I plan to use my allocations with Allmendinger in those races and save my other drivers in Group B for other tracks. Allmendinger is going to qualify up front and score a lot of Stage Points. The only question is… can he keep from breaking his car? Engine and transmission failures happen too often with Allmendinger. The risk is worth the reward though, so I will have him in my starting lineup Sunday.

AUSTIN CINDRIC (5): I know I will be using AJ Allmendinger in the race so I need a driver who can score some bonus points for qualifying. That driver should be Cindric. He is a good road course racers and he has scored bonus points in half of his races on the road courses. Cindric is the best driver to pair with Allmendinger this week.