The 2022 PGA Tour season has reached the homestretch. The four majors are in the books and now there are only three tournaments left before the golfers tee it up in the three FedEx Playoff tournaments.

Following a major tournament overseas is never the best place to be on the PGA Tour schedule, but that is where the 3M Open is again this year. The tournament in Blaine, Minnesota (right outside Minneapolis) does not have the strongest field since most of the top golfers took the week off to rest following the Open Championship. The top golfers in the field this week include: Hideki Matsuyama, Tony Finau, Christian Bezuidenhout, Sungjae Im and rookie sensation Sehith Theegala. Not exactly a good field to build DFS lineups from.

TPC Twin Cities will be the course this week. It is a par 72 which plays 7,164 yards in length. Minnesota is the “Land of Lakes” so of course there are a lot of water hazards. But these are not normal golfers teeing it up this week. Most of the golfers should be able to use their length to take the water out of play.

The greens should be easy to hit and they do not have too much slope. TPC Twin Cities has Bentgrass greens with normal PGA Tour speeds. The ball typically roles true on this type of surface so I would expect more golfers to be able to sink long birdie putts then what we had last week.

This will be the third time the PGA Tour has hosted a tournament at this course so we have limited course history to use for our picks than we usually do at the more popular tournaments on the schedule.

The strategy this week is not too difficult. There is only a handful of good golfers in this field and a few golfers who will be popular as “sleeper picks” in the Fantasy Golf Industry. Hediki Matsuyama, Tony Finua and Sungjae Im are going to be the chalk. Cameron Tringale, Adam Svensson and Troy Merritt will be everyone’s “sleeper picks.” These golfers will all be good plays for Cash Contests and Single-Entry Tournament Contests, but I will try to find contrarian plays for my Multi-Entre Tournament Contests. What is the difference between Adam Svensson and Dillon Frittelli? Not much, except a lot of ownership. I will take the ownership advantage this week and cross my fingers, hoping it hits. 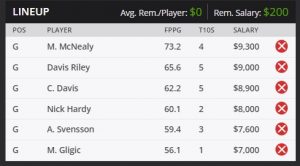 MAVERICK MCNEALY ($9,300): Most of you know that I really like playing McNealy. I usually list McNealy in my “value picks” in the tough fields. So why would I fade him in a crap field. McNealy has been playing well lately. He finished 8th at the John Deere, 16th at the Scottish Open and 9th last week at the Barracuda. He also finished 16th in this tournament last year. I like McNealy’s chances to win Sunday.

DAVIS RILEY ($9,000): There is a lot to like about Riley this week. He has made 7 cuts in a row which includes 5 finishes in the top-15. Do you like stats? Riley ranks No. 3 in Shots Gained Approach, No. 3 in Ball-Striking, No. 7 in Shots Gained Tee-to-Green and No. 8 overall in the key stats.. Riley is a great pick for Cash and Tournament Contests this week.

CAMERON DAVIS ($8,900): Cameron seems to be the hot name in golf right now but that is not the reason I am playing Cameron Davis. He has made five straight cuts so his form is good. That includes an 8th-place finish two weeks ago at the John Deere and a 6th-place finish last week at the Barracuda. Davis also ranks No. 5 in Birdie or Better % so he should score well this week. I bet Davis to win this week so of course I will play him in my Cash Contest lineup.

NICK HARDY ($8,000): This tournament has a history of seeing young golfers winning their first tournament. It happened with Matthew Wolfe in 2019 and it could happen with Hardy this week. He has made 6 cuts in a row with 4 finishes in the top-14. Hardy ranks No. 6 in the Key Stats this week. I will roll the dice with this young golfer.

ADAM SVENSSON ($7,600): I will only be playing Svensson in Cash Contests this week. I always check out what the industry is saying before I write my article and everyone is on the Svensson bandwagon this week. They should be though. Svensson ranks No. 2 in the Key Stats (behind Tony Finau) and No. 1 in Birdie or Better %. Svensson has made seven cuts in a row and that includes a 6th-place finish in his last tournament. He is a great pick for Cash Contests this week.

MICHAEL GLIGIC ($7,000): I need a cheap golfer who can make the cut and finish in the top-35 this week. That golfer is Gligic. He has made his last 4 cuts on tour and that includes a 10th-place finish at a similar course at the John Deere. Gligic ranks No. 19 in the key stats this week. Not too bad for $7K. He should make the cut this week and score well for your Cash or Tournament Contest lineup. 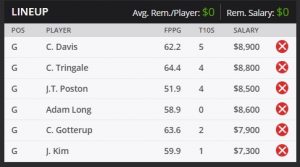 CAMERON DAVIS ($8,900): I have Cameron Davis in my Cash Contest lineup and I will play him in the Tournament Contest lineup too. This tournament should be a scoring bonanza and Davis ranks No. 2 in the field in Eagles made and No. 5 in Birdies made. He also ranks No. 7 in Bogie Avoidance. Davis should score well in DFS this week.

CAMERON TRINGALE ($8,800): We had two Cameron’s at the top of the leaderboard at the Open Championship last week. Could it happen again in Minnesota? I think so. Tringale is in good form and he has excellent course history at TPC Twin Cities. Tringale finished 3rd in this tournament in 2020 and 16th last year. He should have a good chance for another top-five finish Sunday.

J.T. POSTON ($8,500): Poston was a three-alarm fire before the Open Championship. I am not going to let a trip to Scotland to play a links course scare me away from playing a golfer who has been on fire. Poston finished 2nd at the Travelers in June and won the John Deere (the most similar tournament to the 3m Open). Poston ranks No. 5 in the key stats and No. 4 in Birdie or Better %. He has the upside to win Sunday.

BRANDON STEELE ($8,600): Steele was one of the golfers on my radar when I saw the list of golfers in the field this week. Then I ran the key stats and thought… Holy Shit!! Steele may win this week. Steele ranks No. 1 in Shots Gained Tee-to-Green, No. 1 in Ball-Striking and No. 2 in Shots Gained Approach. The only thing keeping Steele from dominating this tournament is that he ranks 120th in putting. He does rank a bit better on Bentgrass greens. If Steele can put, he can will.

MARTIN LAIRD ($8,200): I will take a chance with “Party Marty” this week. Laird has made his last 3 cuts and that includes a 3rd-place finish last week at the Barracuda. He also ranks No. 22 in the key stats and No. 7 in Birdie or Better %. Laird should score well this week and have the upside to finish in the top-10.

JOOHYUNG “TOM” KIM ($7,300): I was all in with Kim last week and he rewarded me with 47th place finish (I was just happy he made the cut). Now the PGA Tour gave Kim an honory membership to the tour. He is the 39th ranked player in the world and most people do not even know it. There is a stat I saw that I thought was impossible. Kim ranks No. 1 in Eagles made and 87th in Birdies. This dude should tear apart the par 5’s with Eagles this week. I just need Kim to make a few more birdies. 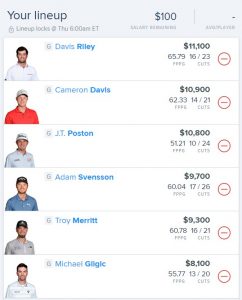 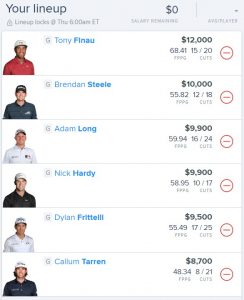 * This is the seventh tournament of segment four. This is also the toughest segment to navigate. We have four playoff tournaments left in this segment so we will need our top golfers for those three events. I will take some chances with the mid-tier golfers this week.