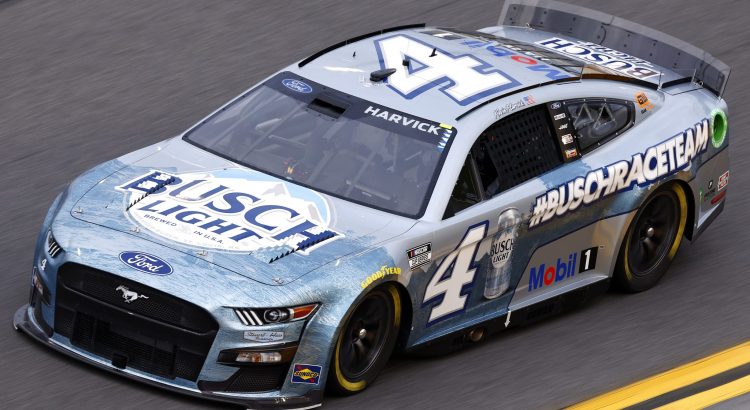 The NASCAR Cup Series will compete this week at Kansas Speedway Sunday. So far the Gen-7 car has been a homerun for NASCAR. The racing has been exciting and we have seen some new drivers up front. I expect the same will be true this week. The Advent Health 400 can be seen Sunday at 3 p.m. ET on FS1.

NASCAR gave the Cup Series teams 20 minutes to shake down their cars in practice. The track was extremely hot with bright sunshine. The air temps were over 90 degrees. The forecast for Sunday is for heavy thunderstorms in the morning, followed by cloudy skies and in the low 70’s. I doubt the practice speeds will translate into speed Sunday, but we cannot ignore it completely. I will use the practice/qualifying speeds as 25% of my rankings, with 50% on what the drivers did in the 670 HP aero package this year and 25% on the results from Las Vegas.

Here are the speeds from Saturday’s practice session… 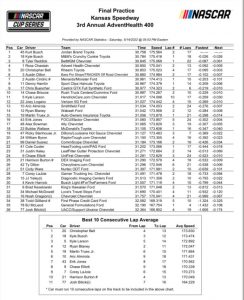 The Gen-7 car has been a game changer. Drivers who were not very good in the past are now dominating races (Ross Chastain). Drivers who used to dominate are now struggling (Denny Hamlin). I expect most “Fantasy Experts” will be preaching about the driver’s stats at Kansas. I will be focusing on what the drivers have done in the races using the 670 HP aero package this year. 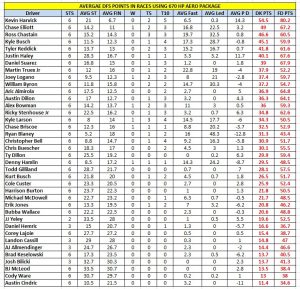 It would be easy to simply look at the previous races at Kansas Speedway and predict that is how this race will play out Sunday. The trend at Kansas is for one driver to lead 150 laps and another driver leads 60 laps. I doubt the race will be similar to races in the past at Kansas. The Gen-7 car has allowed more drivers to lead laps. The race at Las Vegas had an even balance of drivers scoring dominator points. One driver led 83 laps (Ross Chastain), another driver led 49 laps (Kyle Busch), a third driver led 32 laps (Christopher Bell), a fourth driver led 31 laps (Denny Hamlin) and a fifth driver led 27 laps (Kyle Larson).

I expect the dominator points will get spread out this week so I want as many of the drivers with a good chance to lead laps as possible. Hopefully we can hit on 3 of the 5 dominators in the race.

Here are the drivers I expect will have the best chance to dominate the race Sunday: Kyle Larson, Christopher Bell, Tyler Reddick, Kyle Busch and Ross Chastain 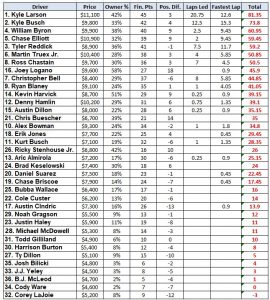 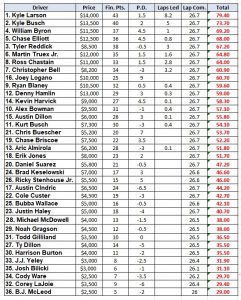 KYLE LARSON (DK $11.1K FD $14K): There is no doubt that Larson has been one of the best drivers at Kansas Speedway. Larson led 132 laps in the first race at Kansas and he came back in the playoffs and led another 130 laps on his way to Victory Lane. Is Larson worth his high price this week? He is only averaging 34.3 DK Points in the races using the 670 HP aero package races this year. Larson posted the 11- fastest speed in practice and qualified third for the race. Larson is the best at searching the track for grip so he should be one of the top dominators Sunday.

CHASE ELLIOTT (DK $10.9K FD $12.5K): Elliott has been the safest pick for your DFS contests this year. He has not scored a lot of dominator points but he has consistently finished up front. Elliott finished 9 of the 12 races this year in the top-10. Elliott also leads the Cup Series with a 5th-place average finishing position in the last 6 races at Kansas. Elliott starts 14th and should have a good chance for a top-5 finish Sunday.

DENNY HAMLIN (DK $10.2K FD $13K): I would have been better off setting my money on fire this year than to play Hamlin in DFS contests. He has burned people so many times this year that his ownership will be lower than it should be. The No. 11 car has been fast this year and his stats at Kansas are outstanding. This team just needs to stop making mistakes. Hamlin starts 18th but his team may fix some damage Hamlin had in practice. If this is the case, Hamlin will start in the back and that will reduce his value Sunday.

WILLIAM BYRON (DK $9.9K FD $11.5K): It will be hard to find a better driver for your DFS lineups than Byron this week. He leads the Cup Series with 544 laps led this season so there is a good chance the No. 24 car will dominate a portion of the race Sunday.

KYLE BUSCH (DK $9.8K FD $12K): Busch started 9th, led 20 laps and went to Victory Lane at Kansas last year. He has been good I the races using the 670 HP aero package this year. Busch led 49 laps and finished 4th at Las Vegas. He also led 103 laps and finished 7th at Dover. Busch posted the 2nd-fastest speed in practice and he qualified 6th for the race. Rowdy should have a good chance to lead a portion of this race and finish up front.

ROSS CHASTAIN (DK $9.7K FD $11K): I cannot fade Chastain in DFS contests. He has been the most consistent driver in the Cup Series this year. It does not matter if the race is on an intermediate track, Super Speedway, Road Course or even on dirt; Chastain has been up front leading laps. Chastain looks fast again. The No. 1 car posted the 4th fastest speed in practice and qualified 11th for the race. I will have some shares of Chastain again Sunday.

JOEY LOGANO (DK $9.6K FD $10K): Kansas is not a great track for Logano. I wasn’t planning on using Logano and then he crashed his car in practice. Logano will start 34th and he is almost a lock to score 20 place differential points. I will lock him into most of my Cash Contests and it will be tough to fade Logano in Tournaments too.

TYLER REDDICK (DK $8.9K FD $8.5K): The word from the garage is that the fast way around Kansas Speedway is to “rip the top lane of the track.” If that is true, Reddick should be a great pick. Few drivers can run against the wall as well as Reddick. The No. 8 car posted the 3rd -fastest speed in practice and qualified on the front row. I will take a chance with Reddick in some lineups Sunday.

KEVIN HARVICK (DK $8.7K FD $9K): I was shocked to see that Harvick has averaged the most DFS Points in the races using the 670 HP aero package this year. The No. 4 car has not dominated any races but Harvick has been one of the best drivers at scoring place differential points. Harvick has finished 3rd, 2nd, 2nd and 4th at Kansas over the last two seasons. He looked like crap in practice and Harvick qualified 23rd for the race. He is a lock for Cash Contest lineups.

CHRISTOPHER BELL (DK $8.4K FD $8.2K): Bell seems to be figuring out the Gen-7 car. He finished 4th two weeks ago at Dover and Bell finished 6th last week at Darlington. He also led 32 laps and finished 10th at Las Vegas so Bell has had a lot of success in the 670 HP aero package this year. Bell posted the fastest speed in practice on the long run speed charts and he won the pole for the race. We could get a lot of dominator points for only $8.4K this week. I will take a chance on that deal.

AUSTIN DILLON (DK $8K FD $6K): Dillon often gets overlooked in DFS contest and that makes the No. 3 car a good contrarian pick for your DFS lineups. Dillon finished 11th at Las Vegas and he finished 9th last week at Darlington. Dillon finished both races at Kansas in the top-10 last year. Dillon starts 21st and he was 6th fastest I practice. Dillon should score 10+ place differential points Sunday.

ERIK JONES (DK $7.7K FD $8K): The No. 43 team has been one of the biggest surprises this year. Jones started 25th and finished 10th two weeks ago at Dover. He was running in the top-10 again last week at Darlington when he was caught up in a wreck (it was not his fault). Jones finished 5 of his 6 races at Kansas in the top-10 while driving for Joe Gibbs Racing. Now that the Gen-7 car has leveled the playing field a bit, Jones should have a decent chance to finish in the top-15 from the 22nd starting position.

DANIEL SUAREZ (DK $7.5K FD $5.8K): Suarez is on the list based on what he has done this year and not what he has done at Kansas Speedway in the past. Suarez has not finished in the top-10 at Kansas since 2017 so there is some risk in using the No. 99 car Sunday. I do like what Trackhouse Racing has going on right now. Suarez started 20th and finished 10th last week at Darlington. He will have a lot of value if he can have a similar performance Sunday.

BRAD KESELOWSKI (DK $7.4K FD $7K): The only reason why Keselowski is on the list is because he starts 30th. Keselowski has not been very good in recent races, he looked like crap in practice and he only out-qualified 6 cars. But come on… the No. 6 team should be able to work on the car in the race and Keselowski has the talent to finish in the top-20. I will have a few shares of the No. 6 car Sunday.

RICKY STENHOUSE JR. (DK $6.8K FD $5.5K): What has gotten into Stenhosue lately? He started 15th and finished 2nd two weeks ago at Dover. The No. 47 car started 26th and finished 8th last week at Darlington. Stenhouse has been one of the best value picks in DFS contest the last two weeks. He starts dead last so he will be a lock for Cash Contests and we will have to eat the chalk in Tournament Contests too.

CHRIS BUESCHER (DK $6.7K FD $5.2K): Buescher had a fast car in practice. He posted the 9th fastest speed with the 6th fastest average speed on the 5-lap speed chart. Then Buescher went out and crashed the car. He will start 35th Sunday and if the car has half the speed that the primary car had, Buescher will be a great pick Sunday. 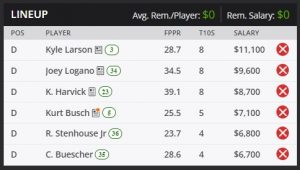 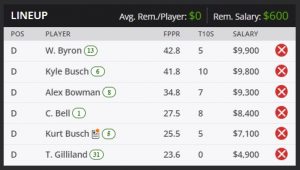 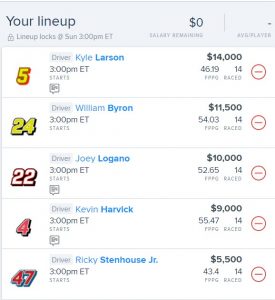 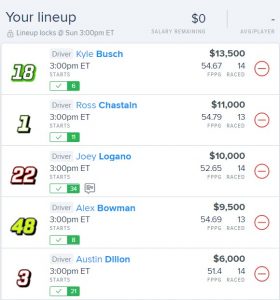