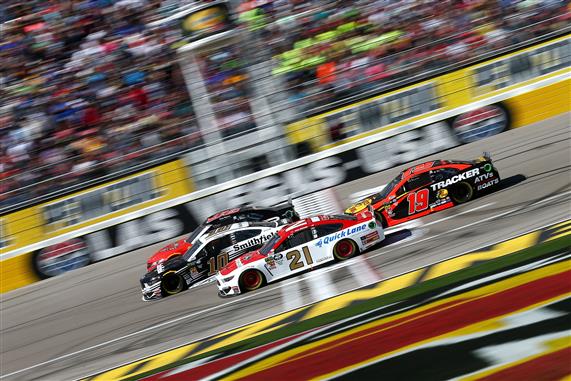 The Cup Series travels across the country to start the “West Coast Swing.” The first stop is in Las Vegas. There is no place better for the teams to lay down their cards and show us what they have for the 2020 season that in Sin City. Las Vegas Motor Speedway provides for some good racing, especially early in the season when the winds are gusting across the track. It will be fun to see which team finds the pay window in Las Vegas. The Pennzoil 400 can be seen Sunday at 3:30 p.m. ET on Fox.

The Pennzoil 400 is scheduled for 267 laps. That means there are 66.75 points available for leading laps and 133.5 points available for fastest laps. Last week was all about scoring place differential points. That strategy is out the window this week. We need to build our lineups around the dominators so we can capture as many of the laps led and fastest laps bonus points as possible.

Four drivers have completely dominated the races in Sin City. Kevin Harvick, Martin Truex Jr, Brad Keselowski and Joey Logano have won the last 10 races at Las Vegas. They have also combined to 1,532 laps at Las Vegas in the last 10 races. If you are wondering about the Stages… Yes, these four drivers have won every Stage at Las Vegas since NASCAR started to award Stage points. Using different combinations of Harvick, Truex, Keselowski and Logano as dominators is a good strategy Sunday.

We cannot pick all four drivers listed above for our lineups. We need to find value with the cheaper drivers in the field. Ross Chastain is our “Free Square” this week. He will be filling in for Ryan Newman in the No. 6 car and his price is way too cheap. Chastain will be one of the highest owned drivers but we simply need to eat the chalk this week.

The best way to find value with the other drivers in the field is to find the higher funded teams that qualified in the back. I like Chris Buescher, Tyler Reddick and Austin Dillon. Do not worry about the drivers priced below Corey LaJoie. They do not offer much value this week.

There are 26.7 points available for leading laps and FanDuel does not award fastest laps points. The top 2 dominators usually score 8 bonus points each and the sub-dominators only score 2 bonus points. I plan to try and select as many drivers as possible who I think can finish in the top 12 Sunday night. If found last year that if you could simply have all five drivers finish in the top 12, your lineup will cash.

* My picks tend to be very popular in DraftKings and FanDuel contests so the best way to win money is follow the strategy I wrote above and create different combinations of the drivers listed below and not simply copying the lineups posted below.

Kevin Harvick $12,000 is the most likely driver to dominate this week. The No. 4 car scored the most DFS points on the 1.5-mile tracks last year and Harvick had a lot of success at Las Vegas. He led 88 laps and went to Victory Lane in this race last year and he followed it up with 47 laps led and a 3rd-place finish in September. Harvick posted the fourth-fastest speed in final practice and the fastest speed from the cars that did not post a qualifying lap. His car was also the fastest on the long runs. I would be shocked if Harvick did not lead at least 40 laps Sunday.

Martin Truex Jr. $11,600 has some questions marks this week because the No. 19 team will be without crew chief Cole Pearn. I still expect Truex to do his thing. He has been one of the best drivers on the 1.5-mile tracks for four years now. He won the last race at Las Vegas and his average finishing position in his last five races at the track is 3.4. Not bad. The word in the garage is that Truex has the best car on the long runs. The average green flag run in the two races at Las Vegas last year was 84 laps. That means Truex should be able to make his was to the front and dominate this race.

Brad Keselowski $11,100 is the most consistent driver at Las Vegas Motor Speedway. He has not finished outside the top 10 in Sin City since 2012. His average finishing position in his last nine races at Las Vegas is 3.2. That is insane! He finished 2nd and 3rd in the two races at the track last year. The No. 2 car was not blazing fast in practice but Keselowski was working on getting his car to work in traffic. He should spend a lot of time in the top five Sunday.

Joey Logano $10,700 may be the best value in the list of dominators this week because of his price. Logano put on a clinic in this race last year. He started 10th, scored 10 place differential points, 21.5 laps led points and 16 fastest laps for a score of 93.5 DK points. It will be hard to win your contest if the No. 22 car has a similar performance Sunday.

Ryan Blaney $9,200 is just another Team Penske Racing driver who has had success at Las Vegas. He has finished three of his four races at the track in the top-five. Now he has the winning crew chief (Todd Gordon) from last year calling the shots for the No. 12 team. Blaney is a boom or bust driver but he could reward you with some dominator points this week.

Kurt Busch $8,900 was not on my list of drivers that I planned to play this week because his stats at his home track are all over the place. I cannot fade him though after watching practice. Busch had one of the best cars in traffic. He was moving all over the track and passing cars like they were sitting still. Busch is a boom or bust driver but I need to have some shares of him Sunday.

Alex Bowman $8,700 was at his best at the 1.5-mile tracks last year. He won the race at Chicago and he finished 11th and 6th in his two races at Las Vegas. I doubt Bowman will lead many laps Sunday but he should be able to finish in the top 10. He is a good pivot play for Multi-Entry Tournament Contests.

William Byron $8,500 showed a lot of improvement last year as the season came to an end. He finished 7th at Las Vegas in September and followed it up with a 5th-place finish at Kansas. Byron has shown improvement each time he gets into a racecar. This could be his breakout season so I want to use him before the rest of the fantasy players figure out he is a good pick.

Aric Almirola $7,800 There was no driver in the garage who was as happy with their car as Almirola. He went out and made some long runs and said, “This is the best setup we have ever had.” Almirola usually gets off to a hot start and then fades over the summer so it would be a good idea to use an allocation with him now. Almirola finished 7th in this race last year. He should battle for a top-5 finish Sunday.

The “Big Three”(Christopher Bell $7,200, Cole Custer $7,100 and Tyler Reddick $6,500) will be popular picks this week because of their cheap price, the power they have under the hood and the skill they possess behind the wheel. Reddick is my favorite from this list simply because he is the cheapest, he should have the lowest ownership and he has had the most success in the Cup Series on a 1.5-mile track (Reddick qualified 21st and finished 9th at Kansas last year). You cannot go wrong with Bell or Custer either. Bell starts in the back but he should make it to his original 22nd place starting spot before the end of Stage 1. His ownership will be lower than it should be since he is going to the back. That makes him a good pick in Tournament Contests.

John H. Nemechek $5,400 gets overshadowed by the “Big Three” and that has a lot to do with the car he is driving. Front Row Motorsports will have Roush Fenway chassis and Roush-Yates engines so it cannot be too slow on the track. JHN filled in for Matt Tifft in the last three races last year. He finished 21st at Texas, 27th at Phoenix and 23rd at Homestead. More importantly, JHN scored at least 7 place differential points in his two races on the 1.5-mile tracks.

Austin Dillon $6,900 will likely be overlooked this week because there are a lot of more popular drivers priced around him. He could be a driver that is under 10% owned who can help win you your contest. Dillon really liked his car in practice. He was only 21st fastest in final practice but he said the handling was where it needed to be. I do not expect a top 10 from Dillon but he should finished around the 15th spot and score your team positive place differential points.

Ross Chastain $6,100 will could be highest owned driver this week but it is hard to fade him at his price. Chastain will be driving in all three series this week so he should have a good idea of how to manage his tire wear. I think he has a lot of talent and the watermelon farmer will show the team owners he is ready for a good seat in 2021. I will be a little underweight from the public on him, but still use Chastain in 30% of my contest.

Ty Dillon $5,700 will be a good cheap option for your team. The No. 13 team unloaded with a lot of speed this weekend. Dillon posted the third-fastest speed in the first practice and once they got the splitter off the track the car really took off. Dillon was 16th fastest in final practice with the 12th fastest long-run car. Not bad for a driver priced under $6K. 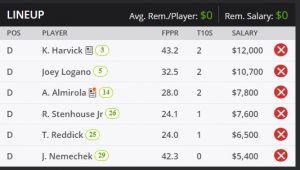 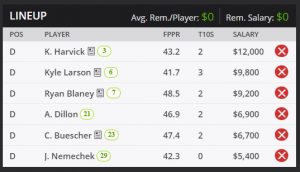 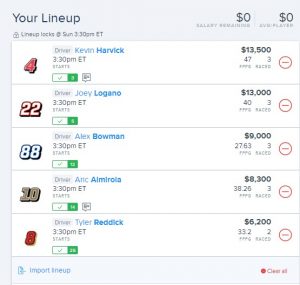 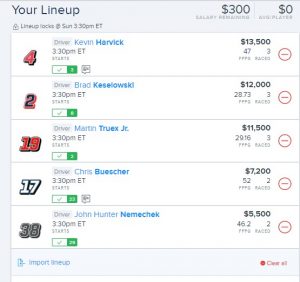