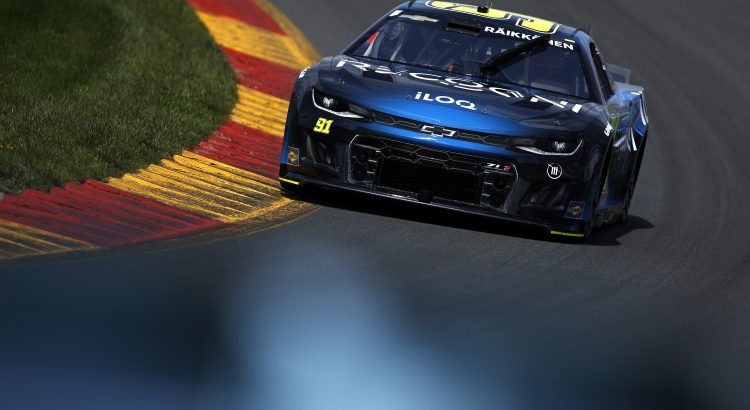 The NASCAR Cup Series will compete at Watkins Glen Sunday. This will be the fifth road course race for the Gen-7 car. The last race on a road course was a complete disaster, but that should not be the case this week. Watkins Glen has more room for the stockcars to make passes than the Indy Road Course. It should be fun to see the drivers battle for the final spots in the playoffs. The Go Bowling at the Glen can be seen Sunday at 3 p.m. ET on USA Network.

The Cup Series had 20 minutes of practice Saturday to dial in their cars for the race. Watkins Glen is 2.45-mile road course so the drivers did not have enough time to make many long runs. They did have time to figure out the balance in their cars and make adjustments. I doubt we will learn much from this practice sessions but it never hurts to look to see which drivers had speed in practice. 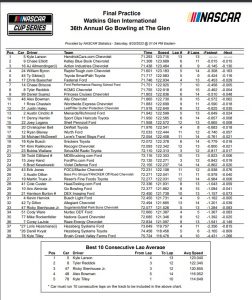 The Gen-7 car does not race like the previous cars on the road course. It obviously has the Joe Gibbs Racing teams confused, while Trackhouse Racing has figured out how to get speed out of their cars. Instead of looking at track history at Watkins Glen, we need to focus our picks on the drivers who have run well on the road courses in the Gen-7 car. There have been four road course races this year (COTA, Sonoma, Road America and Indianapolis). I am looking at the data from three of these races for the picks this week. I am excluding the data from the race at Indianapolis because that track is not setup for stockcars and the race was a complete disaster. 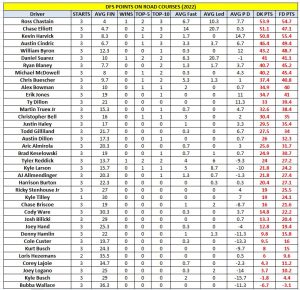 There are a lot of “road course ringers” in the race Sunday. AJ Allmendinger, Kimi Raikenen, Loris Hezemans, Joey Hand, Mike Rockenfeller and Kyle Tiley are all entered into the race. The only driver from this list I really like this week is Allmendinger. The other drivers’ offer some place differential points since they qualified outside the top-30, but do not expect these drivers to run in the top-10 Sunday. 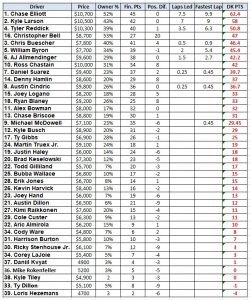 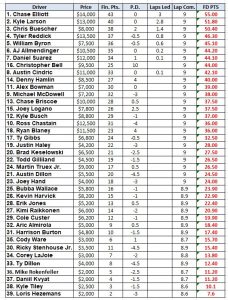 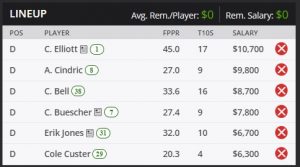 CHASE ELLIOTT ($10,700): I was surprised to see Elliott was not priced at least over $11K, but I will take the discount with the No. 9 car. Elliott has been the best driver this summer and the best driver at Watkins Glen. He finished 2nd, 1st and 1st in his last three races at this track. Elliott posted the second-fastest speed and starts from the pole. Elliott will be popular so I like him more for Cash Contests Sunday.

AUSTIN CINDRIC ($9,800): I like having safe drivers in my Cash Contest lineups and it is hard to find a safer driver than Cindric. He is the only driver to finish all of the road course races in the top-10 this year. He has the speed and the track position to do it again Sunday. Condric could also score some place differential points from his eighth starting position.

CHRISTOPHER BELL ($8,700): Bell is a lock for Cash Contests. He did not have the fastest car in practice, but he posted the 16th-fastest speed with the 11th-fastest long-ru speed. The No. 20 car blew up with five minutes left in practice. The team changed the engine so now Bell starts 38th. His average finishing position on the road courses this year is 15th. Bell will have a good chance to score 15-20 place differential points Sunday.

CHRIS BUESCHER ($7,800): Buescher is underpriced this week in DraftKings contests. He finished second at Sonoma, sixth at Road America and 10th on the Indy Road Course. Buescher posted the sixth-fastest speed in practice so he has the speed to run up front Sunday. Buescher will be highly owned because of his price and speed, but I am not too worried about it in Cash Contests.

COLE CUSTER ($6,300): I typically do not play Custer but he has been decent on the road courses this year and he starts in the back. Custer has a 17th place average finishing position in the four road courses races this year. He has a good chance to move up 10 spots from his 29th starting position. I also like that Custer had some extra track time since he competed in the Xfinity Series race Saturday. 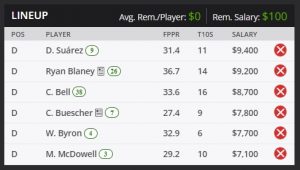 * Chase Elliott, Kyle Larson and Tyler Reddick are going to be the chalk this week. I am going to mess with fire and fade all three of them. We saw in the Xfinity Series race Saturday that the fastest cars wrecked each other while racing for the lead. It happens all of the time in these races. If Elliott, Larson and Reddick wreck each other, my drivers will finish up from and stack dollar bills in my pocket 😊

DANIEL SUAREZ ($9,400): Suarez often gets overlooked in DFS because people like to play his teammate (Ross Chastain) of his price doesn’t fit their budget. I think that could be the case Sunday. Suarez won the race at Sonoma and he finished fifth at Road America. His car was ninth-fastest in practice. Suarez should have a good chance to get the Love Boat (His car is sponsored by Princess Cruises) to Victory Lane at Watkins Glen.

RYAN BLANEY ($9,200): Most drivers want to have a good race Sunday. Blaney must have a good race Sunday. He is the last driver above the playoff cut-line and he will be on the outside if he does not have a good race this week Blaney was only 17th fastest in practice and he did not look any better in qualifying. Most people will fade Blaney because the No. 12 car is lacking speed. I am not worried about it. This race always comes down to strategy and it is a guarantee that the No. 12 team will use one of the most aggressive strategies Sunday to get Blaney to the front.

CHRISTOPHER BELL ($8,700): I have Bell in the Cash and Tournament Contest lineup Sunday. I know he is going to be one of the most popular plays but it is very risky to fade Bell. He is almost guaranteed 40+ DK Points Sunday. I will eat the chalk and be contrarian with my other drivers.

WILLIAM BYRON ($7,700): Byron has not had a lot of success on the road courses this year but he does have one of the fastest cars in the field Sunday. I wanted to see how Byron performed in the Xfinity Series race before I selected him for my Cup Series DFS lineup. Willy-B looked really good Saturday. He has the car to win, but his talent will only allow him to finish in the top-10. I will take a top-10 from Byron Sunday.

MICHAEL MCDOWELL ($7,100): Everyone knows McDowell s a good road course racer but will anyone play him from the No. 3 starting spot? I do not think so. McDowell does not have a playoff position yet. He needs a win Sunday and he may get it. McDowell finished third at Sonoma, eighth at Road America and eighth on the Indy Road Course. His No. 34 team will be very aggressive with their strategy to get McDowell to Victory Lane Sunday. 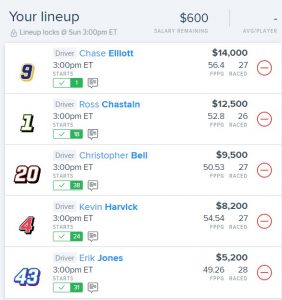 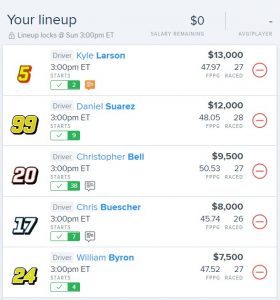