The PGA Tour finally made it through THE PLAYERS Championship and now they will stay in Florida as they travel to Innisbrook Resort (right outside of Tampa Bay) for the Valspar Championship. Following the tour’s “Fifth Major” is never the spot a tournament wants to be on the schedule. Justin Thomas, Victor Hovland, Dustin Johnson, Collin Morikawa, Sam Burns, Louis Oosthuizen and Xander Schauffele are all scheduled to play this week but it will be important to watch out for players withdrawing from the tournament. That happens a lot when the previous tournament is tough and gets extended a day.

The Copper Head Course is a par 71 which measures 7,340 yards in length. There are a few aspects of the course which make the Copperhead Course unique. There are four par 5s and five par 3s this week. The additional par 3 will make iron play more important at the Valspar Championship.

The second aspect of the course which makes it unique is the “Snake Pit”. These sets of holes are similar to the “Bear Trap” at the Honda Classic in Orlando. The “Snake Pit” consists of holes 16, 17 and 18. These are three of the toughest finishing holes on tour. So players should not feel comfortable with their lead until they are in the club house Sunday.

This course is difficult and scoring is usually not too far below par. The Valspar Championship ranked last in birdies and eagles on tour in 2021. You will want steady golfers who can rack up pars this week. If they can score a birdie here and there, your lineup will be golden. 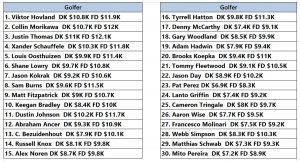 There will be 144 golfers teeing it up this week with the top 65 and ties making the cut. With only 45% of the field playing the weekend, we need to ensure we get as many golfers through the cut as possible. We should be able to win most of our Cash Contest lineups if we get 5/6 to the weekend but our goal needs to be 6/6. I will be playing a “Balanced Lineup” made up of golfers from the $9K through mid-$7K for my Cash Contests this week. You are gambling too much if you dip below the mid-$7K range with your Cash Contest at the Valspar.

This tournament seems to be a bit top-heavy. The golfers priced above the mid-$9K range are clearly the class of the field and should dominate the top of the leaderboard. For that reason my strategy will be to play a lot of “Stars and Scrubs” lineups in the Tournament Contests. I want at least two of the top golfers in my lineups and pair them with three high upside golfers priced in the low-$7K or upper-$6K range. 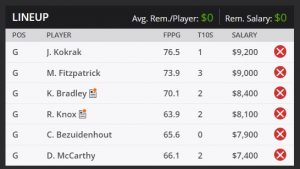 JASON KOKRAK ($9,200):  I will build a balanced lineup for my Cash Contests this week and it will start with Kokrak. He has made the cut in five of his last six trips to the Valspar. That includes four top-13 finishes since 2015. Kokrak has also made seven cuts in a row on tour and hasn’t missed a cut since early October. Kokrak also ranks 17th in the key stats. He said last year that this is his favorite tournament on tour. Kokrak should be a safe pick for your Cash Contest lineups.

MATTHEW FITZPATRCK ($9,000):  Fitzpatrick missed the cut last week because he had to play through the worst weather conditions. He was on fire with top-10 finishes in every tournament he has played on tour this year before his missed cut last week. I expect Fitzpatrick to bounce back at the Valspar. He traveled to Tampa Bay last weekend to get a head start in his preparation. He will also have his brother in the field. Fitzpatrick ranks 12th in the key stats and he should have a good chance to finish in the top-10 Sunday.

KEEGAN BRADLEY ($8,400):  Bradley in Cash Contests? I thought about doing it last week and I wish I would have. Bradley finished fifth at THE PLAYERS and he has now made every cut on tour this year. Bradley also has good course history since he finished second at the Valspar last year. Bradley ranks fifth in the key stats so he should be a safe pick for your Cash Contest lineup.

RUSSELL KNOX ($8,100):  I like ball-strikers in this tournament so of course I like Knox. He ranks third in the field in Ball-Striking and 15th overall in the key stats. Knox also has good course history since he has made six of his last seven cuts at the Valspar (that includes three consecutive top-25 finishes). His recent form is also good. Knox has made every cut on tour this year. Knox is another safe golfer with some upside for our Cash Contest lineups.

DENNY MCCARTHY ($7,400):  I do not need a lot out of McCarthy this week. I just need him to make the cut and he should do it. McCarthy has played the Valspar twice. He finished 39th last year and 9th in 2019. McCarthy also made his last three cuts on tour. So what is the secret to his success? His hot putter. McCarthy ranks No. 1 in the field in Shots Gained Putting on Bermuda. His putter should allow McCarthy to make the cut and be a good play for your Cash Contest lineup. 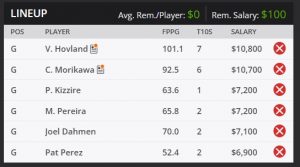 VICTOR HOVLAND ($10,800): The Copper Head Course favors the Ball-Strikers so I am going to build a “Stars and Scrubs” lineup with the two best Ball-Strikers in the world at the top of my lineup. Hovland is the best golfer in the world from tee-to-green right now. He ranks in the top-three in Shots Gained Tee-to-Green, Shots Gained Off-the-Tee, Ball-Striking and Shots Gained Total. His downfall is his scrambling. Hovland ranks second to last on tour in scrambling but it hasn’t hurt him yet. Hovland is my pick to win, so I will have him in my lineup.

COLLIN MORIKAWA ($10,700):  Morikawa missed the cut last week but it was not his fault. His tee time at THE PLAYERS was one of the worst in the field. He had to play his two rounds in either soaking rains or gusty winds. I like Morikawa more this week since he missed the cut because he traveled to Tampa Bay last weekend to get a heads start on this tournament. Morikawa has been a top-10 machine this week and I expect he will battle Hovland for the trophy Sunday.

PATTON KIZZIRE ($7,200): I haven’t played Kizzire in a long time but his name kept popping up when I was researching players for this tournament. Kizzire made the cut the last two times he played the Valspar (he also made the cut in three of his last four trips to the tournament) and he hasn’t missed a cut on tour since January. Kizzire also ranks 13th in the key stats. The course history, recent form and key stats all suggest Kizzire will be a good play, so I will follow the numbers this week.

MITO PEREIRA ($7,200):  Pereira has the tools to finish in the top-10 this week. He is like a younger, cheaper version of Collin Morikawa. Pereira is an elite Ball-Striker who putts well on Bermuda Greens. He ranks seventh in the key stats this week which is unusual for a player priced at $7,200. I like Pereira’s upside, so I will play him in tournament contests.

JOEL DAHMEN ($7,100): There is a lot to like about Dahmen this week. He finished 30th in his first trip to the Valspar in 2019 and he has hasn’t missed a cut on tour since January. Dahmen also ranks 33rd in the key stats and that should get him through the cut. Dahmen has a history of popping up at the top of the leaderboard. I hope this is one of those weeks.

PAT PEREZ ($6,900):  When you select a golfer in the $6K range, you just want someone who can make the cut with a bit of upside. That golfer this week is Perez. He has made four straight cuts at the Valspar and he has made five of his last six cuts on tour. That includes top-10 finishes at Pebble Beach, and Torrey Pines. Perez ranks 26th in the key stats. He just seems to be way too cheap on both DFS sites.

Here are my lineups for Multi-Entry Tournament Contest: ( FantasyRacingTips) 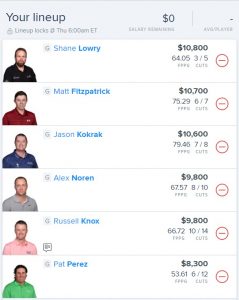 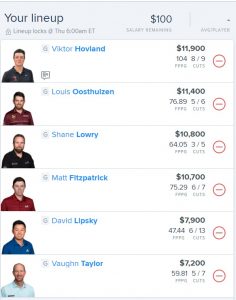 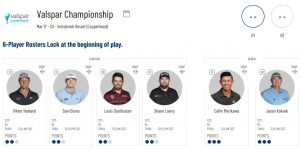 * This is the first tournament of Segment 3. We get all of our allocations back this week but use your top golfers wisely. We have the Masters, the PGA Championship and the Memorial Tournament in this segment. These three events usually have staked fields and we will need some of our top golfers.

* The thing that pissed me off the most about THE PLAYERS is that I lost my One & Done pick in the tournament with the largest purse. That weather screwed my picks and to be honest, it is going to be tough to recover from, but I will do my best.