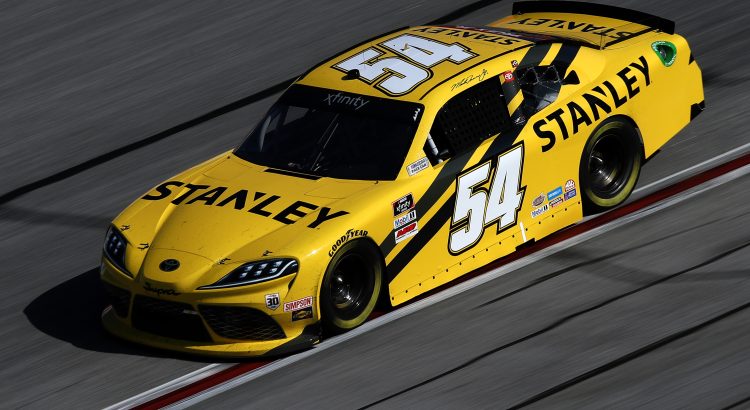 The Xfinity Series will join the Cup Series at Atlanta Motor Speedway this weekend. The “Series Where Names Are Made” competed at Atlanta in March. Ty Gibbs won the race, despite only leading one lap. It was the most import one though. AJ Allmendinger, Trevor Bayne and Noah Gragson combined to lead 117 of the 178 laps (68%). There were 11 lead changes and an exciting race to the checked-flag between the Georgia native, Austin Hill and Gibbs. I expect another exciting race this week. The Alsco Uniforms 250 can be seen Saturday at 5 p.m. ET I USA Network (Weather permitting).

Mother Nature decided she wanted to see the cars on the track without any time to dial in their cars for the race. Qualifying was canceled so the lineup was set “per the rule book.” That means there are a lot of good drivers starting deep in the field whenever they race. 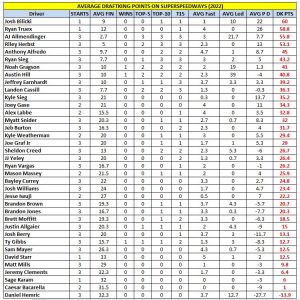 The easiest way to handicap this race will be to look at what happened in the race at Atlanta in March. This race could be much different though. It will be much warmer Saturday and the will make the track more slick. Handling will be more important this week then it was in March.

The four drivers listed above are the safest picks for your DraftKings lineups (Ty Gibbs, AJ Allmendinger, Noah Gragson and Austin Hill) but I also like take a chance with the drivers who start in the back with the best chance to score place differential points. These drivers include: Tyler Reddick, Ryan Truex, Landon Cassill, Daniel Hemric, Brandon Brown, Brett Moffitt, J.J. Yeley and Joey Gase.

Tyler Reddick will be behind the wheel of the of the No. 48 car Big Machine Racing. This will be the fourth time Reddick has driven this car this year. He won the race at Texas, finished 26th at Darlington, 21st at Nashville and 30th last week at Road America. Reddick has the talent to win this race, but he will likely be highly owned because of his starting position. Reddick is a lock for all Cash Contest lineups and worth eating the chalk in Tournaments too.

We cannot forget how well the Kaulig Racing cars work together at the Superspeedways. I will also be building a few lineups where I stack AJ Allmendinger, Landon Cassill and Daniel Hemrick. They have a habit of finishing No. 1, No. 2 and No. 3 in these races. Here is the Kaulig Racing Stack I like for the race: 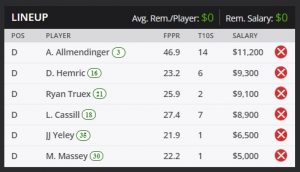 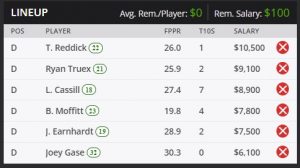 TYLER REDDICK ($10,500): Reddick is a lock for Cash Contest lineups. He does not have the car that the top teams do but it should not matter since he can use the draft to gain speed. Reddick starts 22nd with a good chance to finish in the top-10. He also has the upside to win the race.

RYAN TRUEX ($9,100): I am not a big fan of Truex but he will have one of the best cars in the field when they race. Trevor Bayne led 38 laps before crashing the No. 18 car at Atlanta in March. Now we get to see what Truex can do. I doubt he can win the race, but he should be able to finish around the top-10 and be a safe play for Cash Contest lineups.

LANDON CASSILL ($8,900):  Cassill has been one of the better drivers on the Superspeedways this year. He finished fifth at Atlanta in March, fifth at Talladega and 14th at Daytona. Cassill has averaged 44.1 DK Points per race on tracks similar to Atlanta. That is enough points to help your Cash Contest lineup cash in this week.

BRETT MOFFITT ($7,800): I’ll take a chance with Moffitt this week. He starts 23rd and his average finishing position on the Superspeedways is 12.3. Moffitt started 16th and finished 14th at Atlanta in March. He will score 38 DK Points if he can finish 14th again. I think Moffitt can do it.

JEFFREY EARNHARDT ($7,500): How good was Earnhardt in the last Superspeedway race? He won the pole and finished second at Talladega. That was with a full Richard Childress Racing car and Larry McReynolds as his crew chief, but he should still be good in his Sam Hunt Racing car when they race. Earnhardt started 19th and finished 13th at Atlanta in the Sam Hunt Racing car in March. He scored 36 DK Points in that race. I will be happy if Earnhardt can score 35+ points when they race.

JOEY GASE ($6,100): Gase will be my “punt play” for my Cash Contest lineup. Gase will be driving the No. 35 car for Emerling Gase Racing. He drove this car at Daytona and Talladega. Gase finished 26th at Daytona and 16th at Talladega. He was in the winning lineup at Talladega and Gase may be in the winning lineup again this week from his 31st starting position. 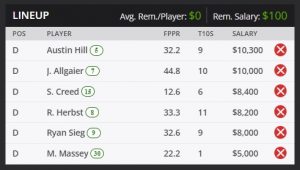 AUSTIN HILL ($10,300): Everyone is going to have AJ Allmendinger, Ty Gibbs or Noah Gragson in their lineups. Yes, they are great picks, but I am going to fade them in this lineup. I will roll with the Georgia native, Austin Hill. He has been awesome on the Superspeedways. He won races in the Truck and Xfinity Series at these types of tracks and he will have a great chance to win when they race.

JUSTIN ALLGAIER ($10,000): “Little Gator” is another driver who may get overlooked this week from the $10K+ price range. Allgaier has been on fire for two months. His average finishing position in his last seven races in fourth. That includes two trips to Victory Lane. Allgaier knows how to race in the draft. He could be the driver to wins us our Tournament Contest lineup this week.

SHELDON CREED ($8,400): Creed is too cheap this week. He has underperformed this year but he had a decent race at Atlanta in March. Creed started 13th and finished ninth. He also finished sixth at Daytona. I doubt Creed will be highly owned. I like his top-10 upside this week.

RILEY HERBST ($8,200): I doubt many people will play Herbst from the eighth starting position this week. That could be a mistake. Herbst has averaged 53.1 DK Points on the Superspeedways this year. That is the most points in the Xfinity Series. It will be tough for Herbst to score that many points this week since he starts in the top-10, but Herbst finished fourth at Daytona, fourth at Atlanta and seventh at Talladega. He will be great pick for $8,200 if he can repeat that success this week.

MASSON MASSEY ($5,000): Most people will play J.J. Yeley or Joey Gase from the back. I will pivot to Massey and hope he can have the same success this week that he had at Atlanta in March. Massey started 26th and finished sixth. He scored 59 DK Points and was in the winning lineup. I will take half of that success from Massey this week.