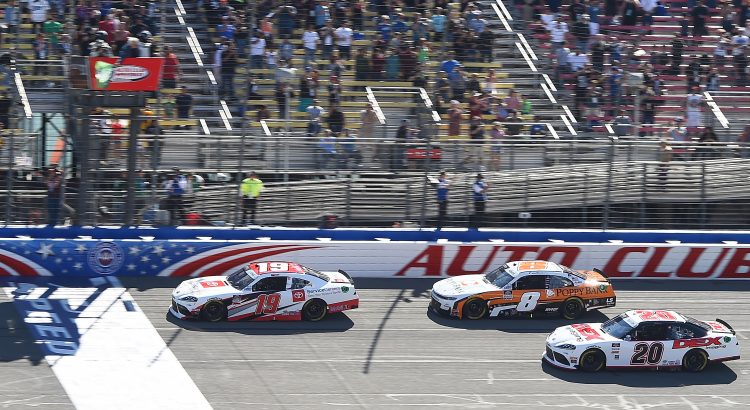 The Xfinity Series crowned their first winner when Austin Hill took his No. 21 car for Richard Childress Racing to Victory Lane at Daytona. Now the Xfinity Series travels across the country to Auto Club Speedway to compete in the Production Alliance Group 300. Auto Club Speedway is a worn-out two-mile oval track. This race should be exciting and a fun one to play a DraftKings contest in.

The Xfinity Series did not have a lot of time to make long runs in practice but the teams did have 20 minutes to shake down the car and get their ride heights for the race. This should be enough information to see which teams will have speed today. The Xfinity Series race is not as long as the Cup Series race so there is not as much time to adjust the car. The cars that were fast in practice should run up front in the race.

Here are the practice speeds for today’s race… 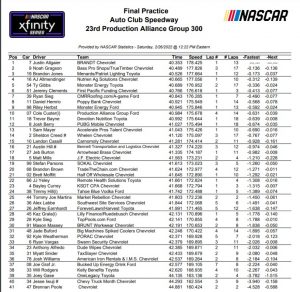 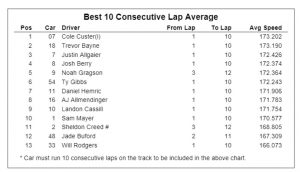 The race today is scheduled for 150 laps. That means there are 37.5 points available for laps led and 67.5 points available for fastest laps (105 total dominator points). The trend in the last four races on the two-mile oval tracks is for one driver to lead 70 laps and another driver to lead 40 laps. That means this is typically a two-dominator race. The main dominator scores roughly 40 bonus points and the second dominator typically scores 20 dominator points. We will win most of our contests if we can score these 60 dominator points so we need to pay up for the drivers who have the best chance to be the top dominators today. 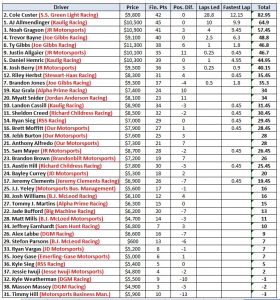 Noah Gragson ($10,900): Gragson has been a lot better at Michigan than he has been at Auto Club. He finished 2nd and 3rd in his last two races at Michigan. He finished 12th and 26th in his last two races at Auto Club. Gragson had the second-fastest speed in practice and he qualified sixth He should have a good chance to be one of the dominators today.

A.J. Allmendinger ($10,500): Allmendinger dominated the last race on a two-mile oval. He started 2nd and went to Victory Lane at Michigan last year. He also led 70 laps and scored 13 fastest laps. That was good enough for 69.35 DK Points. Allmeinger posted the fourth-fastest speed in practice and won the pole. He will have a good chance to dominate the race today.

Justin Allgaier ($10,100): Allgaier has been good on the two-mile ovals but he typically does not dominate the race. He does have a history of finishing in the top-five though. Allgaier had the fastest speed in practice but his car got loose in qualifying. As a result Allgaier will start 20th.  He is a lock for Cash Contest lineups.

Cole Custer ($9,900): Custer will be driving the No. 07 car for R.S.S. Green Light Racing. The car was prepared by Stewart-Haas Racing. Custer has been really good on the two-mile ovals. He won his last race at Auto Club and he finished 3rd at Michigan in 2018. Custer posted fastest long-run speed in practice and quailified second. He should score some dominator points today.

Josh Berry ($9,500): Berry only has one race on a two-mile oval in the Xfinity Series on his resume and it was a good one. Berry started 17th and finished 4th at Michigan last year. He also led 24 laps and scored 25 fastest laps points. That was good enough for 70.25 DK Points and the most points in the race. Berry posted the 12th-fastest speed in practice and quailified 11th. He will be a great pick if he can race as well as he did last year at Michigan.

Brandon Jones ($9,300): Jones has been really good on the two-mile oval tracks. He totally dominated the last race at Auto Club. He led 73 of the 150 laps before getting a flat tire with four laps to go. He is a “boom or bust” driver, so I like Jones more for Tournament Contests today.

Trevor Bayne ($9,100): Bayne will be in the No. 18 car for Joe Gibbs Racing. Bayne will compete in seven races in the Xfinity Series this year. He said on Tuesday, “I am here to win races. I expect to win 2-3 races for JGR this year and anything under that would be a disappointment.” Bayne posted the second-fastest long-run speed in practice and quailified fourth. Bayne will have a good chance to lead some laps today.

Sheldon Creed ($8,500): I expect a big season from Creed. Tyler Reddick had a lot of success at Richard Childress Racing and Creed will too. Creed won in the Truck Series at Michigan so he knows his way around two-mile ovals. Creed posted the 14th-fastest speed in practice and quailified ninth. Creed is a great value pick at Auto Club Speedway.

Riley Herbst ($8,300): Herbst could be a good sleeper pick today. He ended the 2021 with some momentum and that is why Stewart-Haas Racing brought him back for the 2022 season. Herbst had one of his best races at Auto Club in 2020. He started 5th and finished 2nd.  Herbst posted the 9th– fastest speed in practice and quailified 16th. Herbst is a good pick for Cash and Tournament Contests.

Myatt Snider ($8,100): Hopefully Snider is healthy for this race after his horrific crash at Daytona. Snider only has one race at Auto Club on his resume. He started 19th and finished 11th while driving for R.S.S. Green Light Racing in 2020. He scored 40.7 DK Points in that race and he should be able to have a similar race today since he starts 31st. Snider is a good Cash Contests and Tournament Contest play.

Brett Moffitt ($7,900): Moffitt was one of the best choices for your DraftKings contest at Michigan last year. Moffitt started 20th and finished 8th. He scored 48 DK Points in that race. Moffitt wasn’t very fast in practice but he is one of the best drivers at saving his tires over the long run. Moffit is a good value pick today.

Austin Hill ($7,800): Do you believe in momentum? If so, Hill is your driver. He will have a lot of momentum after his win at Daytona. Hill competed in the Xfinity Series race at Auto Club in 2020 for Hattori Racing. He started 15th and finished 16th. His Richard Childress Racing Chevy should be a lot faster than what he had with Hattori. He is a good value pick for the race.

Ryan Sieg ($7,000): Sieg could be a sneaky good value pick this week. He finished 4th (2020) and 11th (2019) in his last two races at Auto Club. Sieg posted the seventh-fast speed in practice and he starts 14th. Sieg does not have a lot of upside, but he should be a decent value pick today.

Jeffrey Earnhardt ($6,800): I wasn’t even considering Earnhardt but then the car had problems in practice. As a result, Earnhardt will start 37th. The team said they fixed the problem. If they did, he should move up 10 positions today. He is a risky pick though.

J.J. Yeley ($5,600): Yeley is always miss-priced on DraftKings in the Xfinity Series contests. I guess it is because the people at DK look at his Cup Series stats and must figure he stinks. But Yeley is typically a top-20 and sometimes a top-15 driver in the Xfinity Series. Yeley was 22nd-fastest in practice. He just needs to finish inside the top-20 in order to return value today.

Bayley Curray ($5,300): Currey could be a good punt play today. He finished 13th, 17th and 16th in his three races on high tire-wear tracks last year. He posted the 23rd fastest speed in practice. Currey should have a good chance for a top-20 finish today.

Matt Mills ($4,700): Mills could be another good punt play today. He finished 14th at Michigan last year and he has an average finishing position of 21st over the last three seasons on the two-mile ovals. Mills was 18th fastest in practice and he starts 25th. If he does not crash, he should return value. 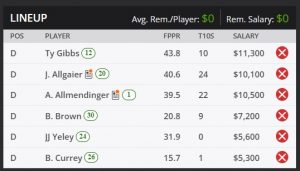 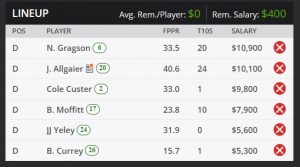