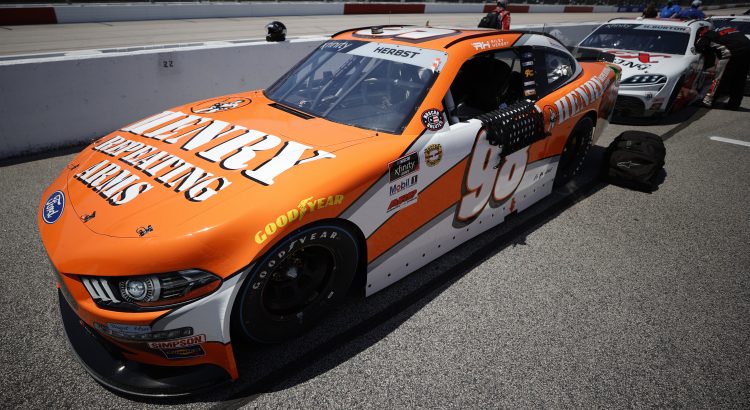 The Xfinity Series will join the Cup Series and Truck Series for throwback weekend at Darlington Raceway. The cars will be wrapped in some of the old paint schemes to honor the driver’s of the past. The field is stacked this week too. Tyler Reddick, John Hunter Nemechek and Ryan Truex will compete in the race Saturday. It should be a good race for the Xfinity Series. The Mahindra ROXOR 200 can be seen Saturday at 1:30 p.m. ET on FS1.

Qualifying was started but only half of the field were able to post a time before the rain came. NASCAR canceled qualifying and set the field “per the rule book”. 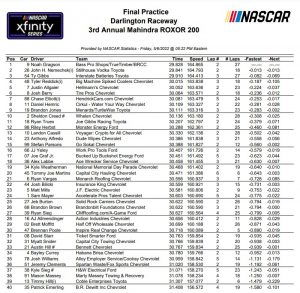 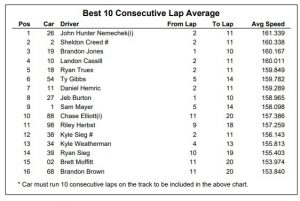 Darlington is a unique track. It is an egg-shaped, high-banked, 1.36-mile track. The weird shape makes it easy to get a “Darlington Stripe” and the abrasive surface wears out tires quickly. Drivers must be able to run up against the wall without damaging their car while taking care of their tires over the long runs. Some drivers have mastered these skills and they have a lot of consistency at the track. The drivers who ran well at Darlington in the past should be up front Saturday. Here is the driver’s average DFS Points scored in the last four races at Darlington… 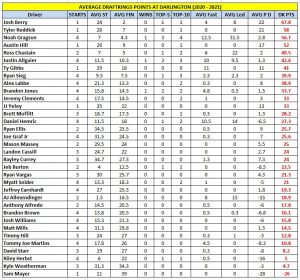 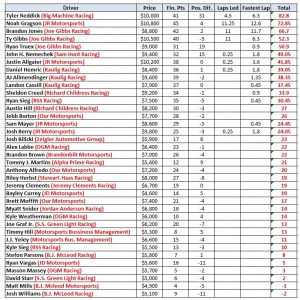 The trend in the Xfinity Series races at Darlington is for three drivers to evenly dominate the race. Each driver’s leads about 44 laps and scores 12 fastest laps (16.4 dominator points each). That is not a huge amount of dominator points but they will add up quickly if we are able to have all three dominators in out lineups.

When NASCAR canceled qualifying it opened up a lot of place differential points for some of the drivers who start in the back. Tyler Reddick and John H. Nemechek would have certainly started in the top-10. Now they start in the back. These two drivers will be highly owned, but they are almost a lock to be in the top-five in DraftKings Points Saturday. *Ryan Truex is also a great value but he has a bit more risk.

NOAH GRAGSON ($10,800): Gragson will have a better chance of winning now that Chase Elliott is not in the field.  Gragson has competed in five races in the Xfinity Series at Darlington. He finished 8th, 5th, 7th, 4th and he won the last race at the track. He has also been one of the top dominators in the last two races at Darlington. Gragson’s driving style fits this track perfectly. He should be one of the dominators Saturday.

TY GIBBS ($10,500): What should we do with Gibbs this week? We know he is going to have one of the fastest cars in the field but he looked completely lost at Darlington last year. Gibbs started 29th and finished 18th. He is a quick learner though so I am sure he spent a lot of time in the simulator to figure out how to tame Darlington. Gibbs starts on the pole so he should be able to lead at least 20 laps. I will have some shares of Gibbs but there are better drivers in the field this week.

JUSTIN ALLGAIER ($10,200): Experience goes a long way at Darlington and Allgaier has it. Allgaier won this race last year, but he only led 10 laps in the race. Allgaier has been good at running up front but he hasn’t been good at dominating the race. I expect the same from the No. 7 car Saturday. Allgaier should be a safe pick for top-10 finish but I doubt he will be a top dominator in the race. I will have a few shares, but I like the drivers priced around him a bit more.

TYLER REDDICK ($10,000): Reddick will be behind the wheel of the No. 48 car for Big Machine Racing. We all know Reddick has the talent to dominate this race but does he have the car. According to Bob Pockrass, his car was prepared by Richard Childress Racing and should have some speed. Reddick starts 34th. He is a lock for all Cash Contests and he is a risky fade in Tournaments Contests Saturday.

JOSH BERRY ($9,800):  Which driver has averaged the most DraftKings Points at Darlington? It is Berry. I know it is a small sample size, but it is hard to ignore what Berry did last year at Darlington. He started 24th, led 8 laps and finished 2nd. Berry won last week at Dover. The speed from that race should translate into success at Darlington. Berry is a good pivot from Noah Gragson.

AJ ALLMENDINGER ($9,600): Ty Gibbs and Noah Gragson get all of the hype in the Xfinity Series but it is Allmendinger who is on a historic pace this year. Allmendinger has finished all 10 races this year in the top-10. The record is 12 consecutive top-10 finishes by Elliott Sadler in 2015. The reason why Allmendinger does not receive more hype is because he does not lead many laps. Allmendinger had problems with the springs in his car in practice but they got it fixed up. He should be a good pick for a top-10 finish Saturday.

BRANDON JONES ($8,800): If you read my DFS Xfinity Series articles each week, you probably already know what I am going to say about Jones… He is a high-risk, high-reward driver. Jones won the race at Darlington in 2020. He also finished 33rd last year. Jones is either going to run up front or wreck his car trying to. His is a tournament play only this week.

LANDON CASSILL ($7,900): Cassill has been a good value pick this year. The reason why he is listed in my core is because his experience at Darlington should give him a bit of an advantage this week. Jeb Burton drove the No. 10 car for Kaulig Racing at Darlington last year. He finished 5th in the race. Cassill should be able to finish in the top-10 Saturday.

JEB BURTON ($7,700): Burton had a great race at Darlington last year. He started 5th and finished 5th. That was in a Kaulig Racing Chevy. How will Burton do in his Our Motorsports Chevy? I doubt Burton will finish in the op-five again, but he should be able to finish in the top-15. He is a decent value pick for your DFS lineups Saturday.

RYAN SIEG ($7,500): Sieg has been the best value pick in DraftKings contests this year and that will not change this week. Sieg has a 9th place average finishing position in his last 7 races, yet he is always priced under $8K. Based on his results on the track, Sieg should be a high $8K driver. Sieg has been consistent at Darlington too. His average finishing position in his last 4 races at the track is 7th. Sieg has more risk since he starts 9th but I think he can maintain his position.

ANTHONY ALFREDO ($7,200): I am going to ignore Alfredo’s stats at Darlington and focus on what he has done this year. Alfredo only has a 19th-place average finishing position at Darlington, but he has a 12th-place average finishing position in his last 6 races in the Xfinity Series. “Fast Pasta” should be a good value pick to get you a top-15 finish Saturday.

JEREMY CLEMENTS ($6,700): Clements is a good pick in DraftKings contests if you play him at the right tracks. Darlington is one of his better tracks so it will be a good idea to have some shares of the No. 51 car Saturday. Clements started 12th and finished 6th in the spring race at Darlington last year. He came back in September and started 15th and finished 8th. Clements loved his Dale Earnhardt Sr. throwback car in practice. He should be a good pick at his home track.

ALEX LABBE ($6,400): Labbe is usually one of my go-to-drivers at the road courses, but he has been good at Darlington too. He has 6 races at “The Track Too Tough to Tame” on his resume. Labbe finished 10th, 10th, 16th, 17th, 17th and 19th in those races. He finished both races in the top-10 last year. He will be a great value pick if he can finish in the top-12 this week. I doubt he will be highly owned as well.

JOSH BILICKI ($5,900): Bilicki will be one of my value picks Saturday. He only has two races in the Xfinity Series and one was great and one was horrible. Bilicki scored 60 DK Points at Daytona and -2 DK Points at COTA. Those two tracks do not translate into speed at Darlington. What does translate is his 22nd fastest speed in practice. Bilicki starts 37th and should move up 12-15 spots Saturday.

TOMMY JOE MARTINS ($5,400):  Welcome back Tommy Joe Martins. He was always one of my favorite value picks in DFS in the past, but TJM took some time away from driving this year so he could focus on his ownership role. TJM will be behind the wheel of the No. 45 car for Alpha Prime Racing. He finished 15th in this race last year. TJM starts 36th. All he needs is a top-25 to return some good value Saturday.

BAYLEY CURREY ($4,600): I was all in on Currey last week and his engine blew early in the race. That happens when a driver races for an underfunded team. Currey has been good this year when his car makes it to the finish line. Currey starts 30th with a good shot to move up 8-10 spots Saturday. 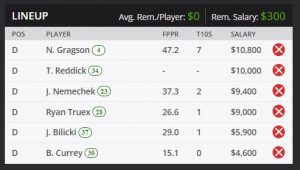 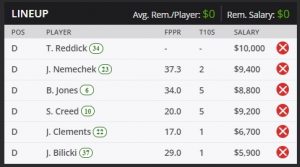