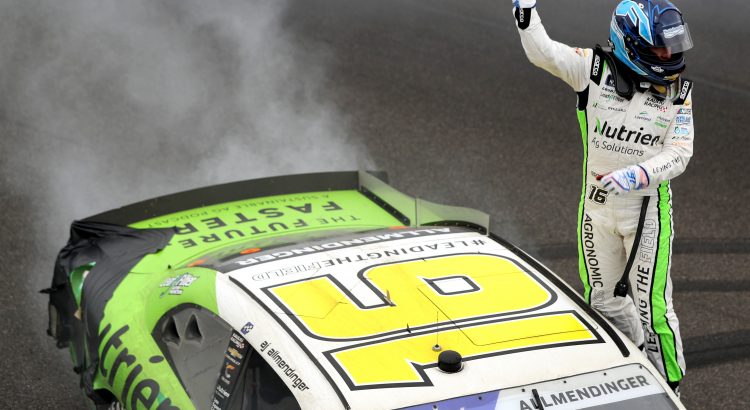 The Xfinity Series competes Saturday on the Indy Road Course. The best Xfinity Series race I have ever seen was the inaugural road course race at the Brickyard in 2020. AJ Allmendinger, Austin Cindric, Chase Briscoe and Noah Gragson put on quite the show as they battled for the lead in the final laps. The field is absolutely stacked this week so this race could be even better. The Pennzoil 150 can be seen Saturday at 3:30 p.m. ET on NBC.

The Xfinity Series had their regular practice schedule this week. The teams were broken down into two groups and they had 20 minutes to dial in their cars for the race. The Indy Road Course is a 2.5-mile in length. The track is too big for the teams to make many long-runs in practice. We should still be able to learn a bit from practice Friday. The cars are impounded after qualifying so the speed the cars had in practice is the speed the teams will start the race with Saturday. 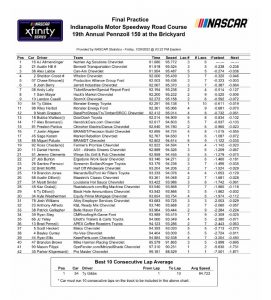 The road course at Indianapolis Motor Speedway is not like the other road courses but it takes a special skill to out-brake the competitors and turn fast laps at a road course. I will be looking at the driver’s results in the three races on the road courses this year to help predict what will happen Saturday. These races include COTA, Portland and Road America. 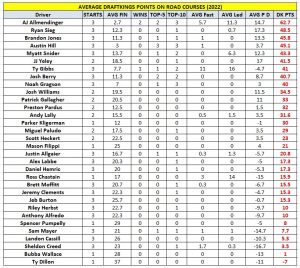 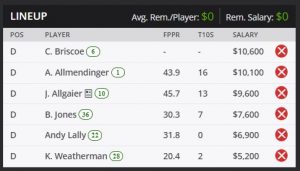 CHASE BRISCOE ($10,600):  Briscoe won the Xfinity Series on the road course at Indianapolis in 2020 and he should be a threat to do it again Saturday. Briscoe posted the fifth-fastest speed in practice and qualified sixth for the race. His SS Green Light Racing car has full support of Stewart-Haas Racing so it should be fast enough to win the race.

AJ ALLMENDINGER ($10,100):  How is Allmendinger the fourth-highest priced driver in DraftKings Contests? I was expecting Allmendinger to be $500 more than any driver in the field so I will take the discount. Allmendinger posted the fastest speed in practice and he was fastest on the five-lap average speed chart. Allmendinger is a lock for all Cash Contest lineup Saturday.

JUSTIN ALLGAIER ($9,600):  Allgaier has been the most consistent driver in the Xfinity Series. He has a fourth-place average finishing position in his last 10 races. That is outstanding. A trip to a road course will not slow down Allmendinger. He knows how to win these races. I will take a chance with Allmendinger from the 10th starting position.

BRANDON JONES ($7,600): Jones made four laps in practice and then he reported an electrical problem in his car. The team fixed the problem after practice and that is a violation of NASCAR’s unapproved adjustments rule. Now Jones will start 36th Saturday. Jones is not the best road course racer in the field but he should be fast enough to move up 15-20 spots in the race.

ANDY LALLY ($6,900): There are many drivers in DraftKings contests who are mispriced and Lally is one of them. He is one of the best road course drivers in the field and there is no way Lally should be under $7K. He posted the seventh-fastest speed in practice. Lally should score 8-10 place differential points from his 22nd starting position. 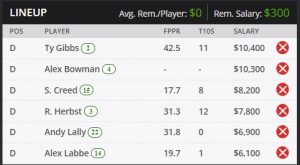 ALEX BOWMAN ($10,400): I thought about playing Chase Briscoe in this spot but I did not want to max out the salary and I expect Bowman will be slightly lower owned. His car is a full Hendrick Motorsports car. Bowman should run up front Saturday and have a good chance to score some dominator points and finish in the top-five.

SHELDON CREED ($8,200): I doubt Creed is going to be highly owned this week. He is an underrated road course driver. Creed had a lot of success on the road courses in the Truck Series and he is improving in the Xfinity Series. Creed posted the fourth-fastest speed in practice with the seventh-fastest long-run speed. Creed will have a good chance to finish in the top-10 from his 15th starting position.

RILEY HERBST ($7,800) I always like Hebrst at the road courses, but I like him more this week since he has Chase Briscoe as a teammate to compare notes with. Herbst finished seventh last month at Road America. He has speed again this week. Herbst posted the 11th fastest lap in practice with the fourth-fastest lpng run speed. He starts third, so there is some risk. His starting position should lower his ownership Saturday.

ANDY LALLY ($6,900): I have Lally in the Cash and Tournament Contest lineups this week. He is one of the most mispriced drivers in the contest and it is tough to fade him. I am sure Lally will have more ownership then I would like, but I will eat the chalk and play this road course expert.

ALEX LABBE ($6,100): Labbe is another road course expert I will have in my lineup. Labbe has a lot of experience road course racing in Canada and it has translated into success in the Xfinity Series. Labbe finished 10th at Portland and 15th at Road America. He posted the third-fastest speed in practice so his car has the speed to finish in the top-10 again.