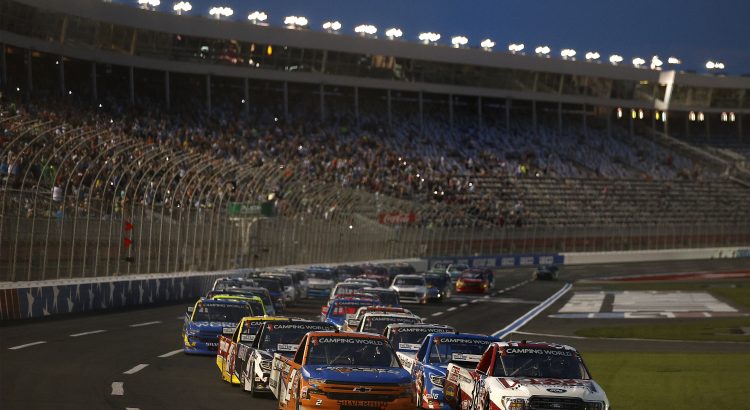 The NASCAR Camping World Truck Series will join the Cup Series and Xfinity Series at Charlotte Motor Speedway this week. We should have a good idea of what trucks will be fast Friday night since the race at Charlotte will be the third consecutive race on a 1.5mile track for the truckers. It will also be the fourth race of the season on a track similar in size and shape to Charlotte. The DraftKings picks for the Truck Series were pretty good last week and I expect the same Friday night.

The strategy for the Truck Series race is pretty easy this week… Do you pay the $14,400 for Kyle Busch or do you fade him? Rowdy has competed in three Truck Series races this year. He finished 2nd at Las Vegas, 3rd at COTA and 3rd at Martinsville. He was also one of the top-dominators in two of those three races. The problem with Busch is that he needs to win and completely dominate the race to return value at his steep price. Of course he has a good chance to do both but Busch has competed in 8 races in the Truck Series over the last two seasons. He has only completely dominated 1 of the 8 races (Atlanta last year). Rowdy only led 20 laps and finished 2nd in his last Truck Series race at Charlotte (2020). That is not enough. I am not going to completely fade Busch this week, but I am not going to have him in 70% of my lineups like most people. I will take my chances with John H. Nemechek, Zane Smith, Chandler Smith and Ryan Preece.

There are 134 laps scheduled for the race Friday night. That means there are 33.5 points available for leading laps and 60.3 points available for fastest laps (93.8 dominator points). I looked at the race at Charlotte in 2020 to predict the points for the dominators this week. Kyle Busch competed in that race and no driver led over 47 laps. Chase Elliott led 47 laps, Austin Hill led 26 laps, Kyle Busch led 25 laps and Zane smith led 15 laps. I expected the dominator points will be spread out similarly this week.

Here are the practice speeds from Friday’s practice at Charlotte… 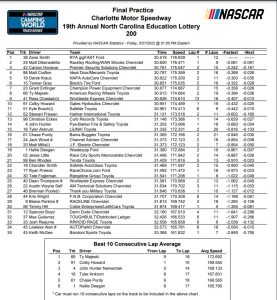 KYLE BUSCH $14,400: Of course I am going to have some shares of Busch Friday night, but I will not have as many shares as everyone else. Busch could easily destroy the field this week, but these young drivers have proved they are not afraid to race Rowdy. Busch will be good tonight; I am just not sure he will be great.

JOHN H. NEMECHEK $11,500: The Kyle Busch Motorsports trucks are going to be fast tonight. These are usually the best trucks in the field when Rowdy is in the race because he has time to help the other teams with their setups. Nemecheck has been fast this year on the 1.5-mile tracks but he has not dominated like he did last year. JHN usually steps up his game when he is racing the bossman. I expect the No. 4 truck will be one of the dominators Friday night.

ZANE SMITH $10,800: Smith will be my pivot from the KBM trucks Friday night. Smith looked awesome at Kansas (he led 108 of the 134 laps on his way to Victory Lane) and he looked horrible last week at Texas. So what Zane Smith will we get this week? I think he will be closer to what he was at Kansas than what Smith was in Texas. Smith competed in two Truck Series races at Charlotte and he finished 3rd and 10th. He also led 13 and 15 laps in those races. Smith should have a good chance to be one of the dominators at Charlotte.

CHANDLER SMITH $10,100: Kyle Busch and John H. Nemechek are going to get all of the attention this week from the Kyle Busch Motorsports Garage, but Smith could actually be their best driver Friday night. Smith led more laps and had a better Driver Rating than Busch and Nemechek at Las Vegas earlier this year. He also won that race. Smith has finished 1st, 4th, 4th and 8th in the 4 races on the 1.5-mile tracks in 2022. I will have a lot of shares of the No. 18 truck at Charlotte.

RYAN PREECE $9,300: Preece is my favorite driver in the field this week. He will once again be behind the wheel of the No. 17 truck for DGR. Preece has driven this truck in 3 races this season. He finished 4th at Las Vegas, 7th at Atlanta and 3rd last week at Texas. Preece is not scared to go door-to-door with Kyle Busch. He has scored nearly the same points as Rowdy in DFS contests this year, but we are getting Preece for $5,100 less in salary. I will take the discount and pare Preece with some of Busch’s teammates.

STEWART FRIESEN $9,100: What the heck got into Friesen last week? I expect the No. 52 truck would be fast but I did not expect Friesen to lead the most laps and win the race. He said in an interview on SiriusXM after the race that Todd Bodine helped him with his setup last week and it worked. Friesen will be a great pick if he can bring the same speed to the track this week.

CHRISTIAN ECKES $8,900: We cannot forget about the ThorSport Racing trucks at Charlotte. The No. 98 team seems to have figured something out with their setups in the last two races. Eckes started 17th and finished 5th at Kansas (51 DK Points) and he started 4th and finished 2nd last week at Texas (59 DK Points). Whenever you can get a driver with 50+ DK Points upside for under $9K, you have to take it.

MATT CRAFTON $8,500: Crafton has finished his last five races in the top-10. The No. 88 truck will like finish around the 10th position again this week, but Crafton has not led many laps this year. He does not have the upside for Tournament Contests, but Crafton should be a safe pick for Cash games this week.

TY MAJESKI $8,300: Sign me up for some Ty Majeski this week. He may be the best driver at ThrorSport this year. Majeski has been on a hot streak lately. He finished 4th at Darlington (40 DK Points), 2nd at Kansas (47 DK Points) and 5th at Texas (44 DK Points). He is averaging 43.6 DK Points over the last month and he is only $8,300. I will take that value in my lineup this week.

MATT DIBENEDETTO $8,100: Can we trust DiBenedetto this week? His truck Series career got off to a slow start but his No. 25 team is starting to figure it out. DiBenedetto finished 11th at Darlington, 7th at Kansas and 10th last week at Texas. Those are the results we were expecting from DiBenedetto when the season started. I will take a few chances with him this week.

TYLER ANKRUM $7,900: Ankrum is a decent pick when he starts deep in the field. Ankrum is too inconsistent to start in your DraftKings lineups when he starts up front, but the risk is reduced when Ankrum starts 25TH. He should have a good chance to move up 10 spots in tonight’s race.

COLBY HOWARD $7,500: Howard was running well in the Truck Series so I decided to take a chance with him last week. Of course my bad luck caused Howard to crash. He finished 11th at Kansas, 13th at Darlington and 12th at Bristol heading into last week’s race. His truck still had speed, but he was in the wrong place at the wrong time. I will give Howard another chance this week.

HALIE DEEGAN $6,500: Deegan is a good pick in DraftKings contests when she starts outside the top-15. She has finished 4 of her last 5 races between 17th and 19th place. She finished 13th at Charlotte last year and Deegan should be one of the top place differential drivers in the race. Her truck was leaking grease in the back wheel so the team fixed the problem and Deegan missed qualifying. She will start in the back and should more up 15-20 spots in the race. 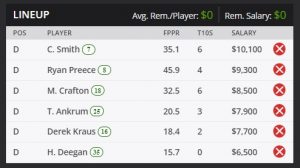 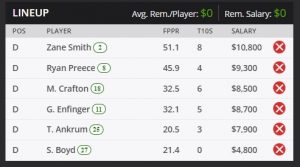 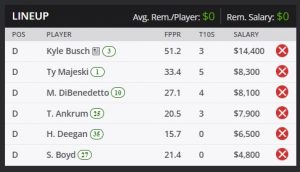