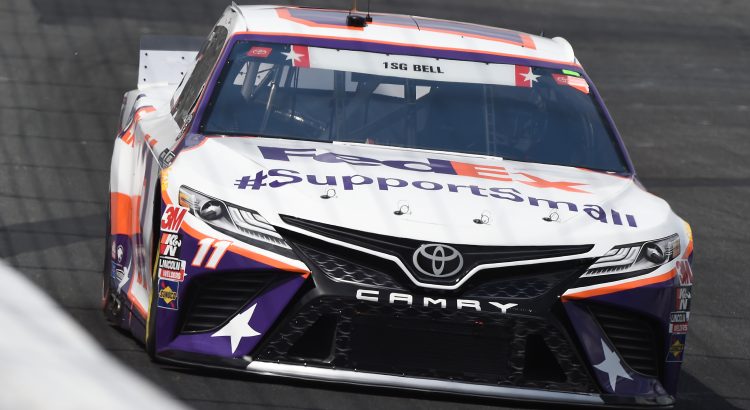 The NASCAR Cup Series will have a home game this week when they compete in the Coca-Cola 600 at Charlotte Motor Speedway. This is a “Crown Jewel” race for the series so the teams do not hold back any of their secrets in this race. If they have been “testing” in the previous weeks, it will be time to turn in their test papers and receive their grades following the Coca-Cola 600. It is a long run, but it should be a lot better than what we had last week at Texas Motor Speedway.

So why am I scared? These Goodyear tires have been horrible. The Cup Series had problems with tires going down at Kansas and it happened again last week at Texas. Can the teams make it 600 miles without blowing a tire? I sure hope so, but it does have me worried. I am still going to go with the trend and play my top drivers this week and hope their crew chiefs is not an idiot and puts some air in the tires.

Here are the picks for the Coca-Cola 600…

KYLE BUSCH (6): Before the season started I had Martin Truex Jr. penciled in as my starter in Group A. I am going to pivot to his teammate Sunday. Right on cue… Joe Gibbs Racing has come to life once the caledar turned to May. They do it every year. Busch has been their best driver. He led 49 laps and finished 3rd at Las Vegas. Rowdy led 18 laps and finished 3rd at Kansas. He led 47 laps and would have had a great chance to win at Texas if his tire wouldn’t have gone down. Busch is running too well right now to fade.

KYLE LARSON (5): Larson won this race last year and he should have a good chance to win it again Sunday night. Larson has been the best driver in 2020 on the 1.5-mile tracks. He led 27 laps and finished 2nd at Las Vegas and he led 29 laps and finished 2nd at Kansas. Larson was also running 2nd last week at Texas when a tire went down and he got into the wall. The race this week should be a battle between Joe Gibbs Racing and Hendrick Motorsports. I will take their best drivers for Group A this week.

WILLIAM BYRON (5): This will be a home race for Byron this week. He has had a lot of success at his home track. He won at Charlotte in 2019 and he finished 4th last year. The No. 24 car has been fast this year, so Byron should have a good chance to finish in the top-five again. I know my allocations with Byron are running low, but this is one of his best tracks. I need to give him a spot in my lineup this week.

CHRISTOPHER BELL (7): Welcome to the party Christopher Bell. The No. 20 team has woken up after being in hibernation for the first quarter of the season. Bell finished 4th at Dover, 6th at Darlington, 5th at Kansas and he had a fast car at Texas too. His stats at Charlotte are not great, but I like the speed the No. 20 car has right now. Bell will also have a good chance to win the pole Saturday. He won the pole at both 1.5-mile tracks this season (Las Vegas and Kansas).

ROSS CHASTAIN (6): You cannot fade Chastain right now. When he is not jumping over cars (Google the video from the All Star Race with Kyle Busch and Chastain), the Watermelon Man is finishing in the top five. Chastain led 83 laps and finished 3rd at Las Vegas. He led 4 laps and finished 7th at Kansas. He was also running in the top-five at Texas when he “ran over” Kyle Busch. Chastain should spend a lot of time of front, leading laps and scoring Stage Points for your fantasy team.

KURT BUSCH (9): Who has the best average finishing position on the 1.5-mile tracks in the Cup Series this year? Of course it is Kurt Busch. He finished 13th at Las Vegas (one of his worst tracks), 3rd at Atlanta and won the race at Kansas. The Toyota’s seem to have found some speed so I will take a chance with Busch. Alex Bowman and Joey Logano are also good picks, but I haven’t used any allocations with Busch yet. I would like to use one Sunday.

AUSTIN CINDRIC (6): I will take a chance with Cindric this week. He looked fantastic in the All-Star Race. I am hoping that speed translates into a good run in the Coca-Cola 600. Cindric has had a lot of success at Charlotte in the Xfinity Series. He finished 2nd last year and 3rd in 2020 in the Xfinity Series race at Charlotte. Cindric should be the best pick in Group C Sunday night.

DANIEL SUAREZ (6): I really like the speed that Erik Jones and Daniel Suarez have had this year. I hate how they have been finishing races though. Jones finished 31st at Las Vegas and 32nd at Kansas. Suarez finished 37th and 33rd at Kansas. Both cars were fast in the races, but both had issues that caused them to finish in the back. I am using Suarez based on his speed at Texas. I am hoping that translates into speed at Charlotte.