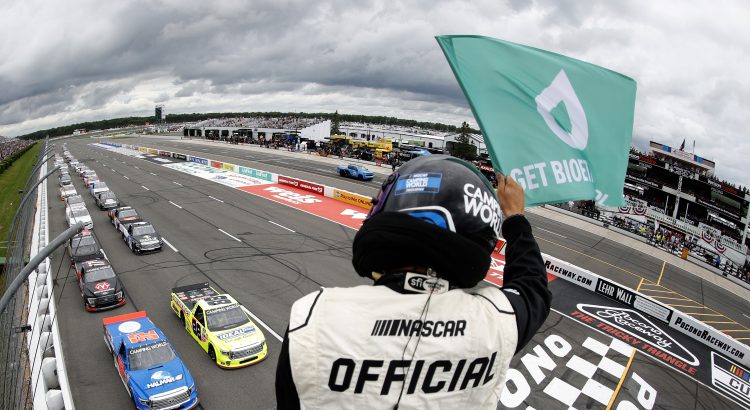 The NASCAR Camping World Truck Series will join the Xfinity Series in a double-header of racing Saturday at Pocono Raceway. The Trucks will be on the track for what should be an exciting race. This is the last race for the truckers before their playoffs start next week at Lucas Oil Raceway. It should be fun to see if another trucker can win at the “Tricky Triangle” and secure a spot in the playoffs. The CRC Brakleen 150 can be seen Saturday at 12 p.m. ET on FOX (Yes, the truckers get to be on FOX this week and not FS1).

We need to focus our picks on finishing position at Pocono. We should win all of our contests if we can find six drivers who can finish in the top-10. It will also help if the drivers score some place differential points on their way to the top 10.

The Truck Series practice and qualifying was rained out Friday. That means NASCAR set the lineup for the race “per the rule book.” That means there are some great picks who will be starting deep in the field. Ryan Preece and Austin Hill start outside the top-20. They are almost locks for 15-20 place differential points. These two drivers are going to be popular but it may be tough to win your DraftKings Contest without Preece and/or Hill in your lineup.

Here is the lineup for Saturday’s Truck Series race… 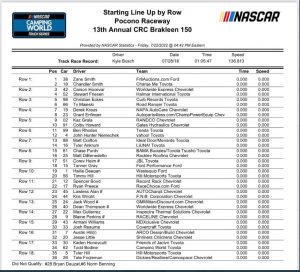 * I like Tate Fogelman more than the model that produced the rankings this week. 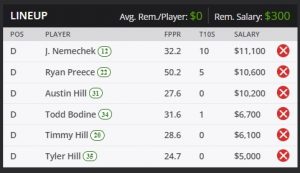 JOHN H. NEMECHEK ($11,100): DraftKings makes Nemechek the highest priced driver each week, but should he be? Nemechek has only won one race and only has six finishes in the top-five this year (in 15 races). That could change Sunday though. Nemechek won the race at Pocono last year. He starts 12th so he is going to be a highly owned driver. I will fade him in most of my Tournament Contest lineup and use Nemechek in all of the Cash Contest lineups this week.

RYAN PREECE ($10,600): Preece will be behind the wheel of the No. 17 truck for DGR Saturday. Preece has driven this truck in six races this year. He won at Nashville and Preece has a 5th-place average finishing position. He starts 22nd so he should be a lock for 14-18 place differential points. Preece is going to be one of the highest owned drivers. I will eat the chalk in some Tournament Contest and play him in all Cash Contest Saturday.

AUSTIN HILL ($10,200): Hill will be behind the wheel of the No. 7 truck for Spire Motorsports. William Byron won the race at Martinsville in this truck and Chase Elliott finished 7th at Bristol. Hill has been pretty good at Pocono in the truck Series. He finished 2nd at the Tricky Triangle in 2020 and 5th last year. Hill starts 31st so he has a great chance to be the highest scoring driver in DraftKings Contests this week. We may have to eat the chalk in Tournament Contests and Hill is a lock for all Cash Contests at Pocono.

TODD BODINE ($6,700): Bodine will once again be behind the wheel of the No. 62 truck for Halmar Friesen Racing. Bodine has driven this truck in 5 races this year. His average finishing position in those races is 18th. He should score very well from the 34th starting position Saturday.

TIMMY HILL ($6,100): Hill is always in my lineup so there is no reason to fade him this week. Hill is consistently the most underpriced driver in DraftKings Contests. His 28.6 average DK Points per Contest at 15th-best, but he is the 26th highest-priced driver. Hill starts 20th Saturday so there is some risk in using him in your lineup, but I trust Hill to finish inside the top-20 at Pocono. 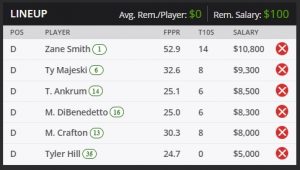 * My Strategy for the Tournament Contest lineup is to “fade the chalk” and use the drivers who start up front with a good chance to finish up front.

ZANE SMITH ($10,800): Smith has been the best driver in the Truck Series this year. I do not understand why he is not the highest-priced driver in DraftKings Contests. Smith has won three races this, has the best average finishing position, led the most maps, scored the most fastest laps and finished 13 of the 15 races in the top-10. Smith finished 2nd, 2nd, 3rd and 2nd in his last 4 races. You cannot find a safer pick than Smith this week.

TY MAJEWSKI ($9,300): You can never have too many ThorSport Racing drivers in your lineup. Majewski has not been to Victory Lane this season but he has been consistently good. Majewski has finished half of the races in the top-5. He could add another top-5 finish to his resume this week. Majewski starts sixth so most people will fade Majewski and use drivers who start deeper in the field.

MATT DIBENEDETTO ($8,300): I expected a lot more from DiBenedetto in the Truck Series this year. I know his Rackley Racing truck doesn’t have the funding that the ThorSport Racing or KBM trucks have, but we have seen many drivers come down to the truck series in mid-tier trucks and dominate races (Ross Chastain in the Niece Motorsports trucks is one example). DiBenedetto is in a “must win situation.” He starts 16th and DiBenedetto should score some place differential points on his way to the top-10.

MATT CRAFTON ($8,000): Has Father Time finally caught up with Crafton? He has only finished 8 of the 15 races in the top-10 this year. Crafton is 70 points below the cutoffs for the playoffs so he has to win Saturday. I doubt he will win the race Saturday but Crafton should have a good chance to finish in the top-10. He has finished 4 of his last 5 races at Pocono in the top-10, including a 6th-place finish last year.

TYLER HILL ($5,000): Hill will be in my Cash and Tournament Contest lineups this week. Hill is all reward and no risk since he starts 35th. I am hoping the 5 drivers listed above all finish in the top-10 and hill can move up 10-15 spots in the race. This lineup should score well if that happens.