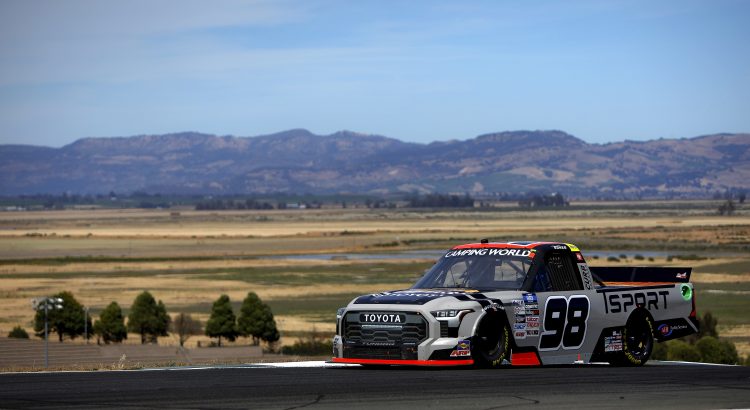 The NASCAR Camping World Truck Series will join the Cup Series at Sonoma Raceway this weekend. This will be the first trip to Northern California for the truckers and the field is loaded this week. Kyle Busch, Alex Bowman, Austin Dillon, Ross Chastain, Harrison Burton, Kaz Grala, Parker Kligerman and Todd Bodine will join the truckers at Sonoma Saturday.

Rowdy has competed nine races in the Truck Series and he won two of them (Atlanta and Kansas last year). He is 0-4 in the trucks this year with an average finishing position 3.8. His best race was at COTA when Busch led the most laps (31 of 46 laps) and finished 3rd. There is a good chance he leads 60% of the laps Saturday, but he will have some competition. Fading Busch has been a decent strategy this year but I will pay up for him this week. It is easier for Rowdy to run away from the field on a road course than it is on an oval.

The Truck Series had had 20 minutes to dial in their trucks before they had to get them ready for Saturday’s group qualifying session. Most of the regular Truck Series teams were able to make a five-lap run, but most of the Cup Series stars did not make any long runs. We won’t be able to learn much from this practice because running a lap at Sonoma alone is a lot different from doing it in traffic. It doesn’t hurt to check out the practice speeds though. 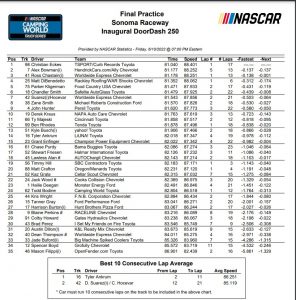 KYLE BUSCH $12,000: Busch will be behind the wheel of the No. 51 Truck for Kyle Busch Motorsports. This will be his last Truck Series race of the season and the last chance for Busch to extend his streak of 18 consecutive seasons with at least one win the in the Truck Series. You know he is going to be extra motivated to extend his winning streak. Rowdy is expensive and the results haven’t been dominant this year, but I will pay up for him at one of his best tracks.

ROSS CHASTAIN $11,100: Chastain does not have a truck with as much speed as the Kyle Busch Motorsports trucks but I would not bet against Chastian winning the race Saturday. He has competed in four Truck Series races this season and he won his last race at Charlotte. Chastain finished 7th in the Cup Series race at Sonoma last year. He should be good enough to finish in the top-five in the Truck Series Race.

JOHN H. NEMECHEK $10,600: Nemecheck is the best road course racer in the Truck Series. He finished five of his last seven road course races in the top-three. He started 11th and finished 2nd at COTA earlier this season. Nemechek could be overlooked this week with so many Cup Series drivers in the race. That could be a mistake.

ALEX BOWMAN $10,000: Bowman will be behind the wheel of the No. 7 truck for Spire Motorsports. Don’t kid yourself; this truck has the full support of Hendrick Motorsports this week. Bowman drove this truck at COTA earlier this season. He qualified 3rd, ran most of the race in the top 10 but he had problems late in the race and finished 25th. I expect Bowman to bounce back this week and finish in the top-10 with the upside to win the race.

BEN RHODES $9,800: Rhodes is giving John H. Nemechek competition as the No. 1 driver in the Truck Series on the road courses. Rhodes won the road course race at Daytona last year and he finished fourth at COTA this year. I doubt his ownership will be high since so many people will fill their lineups with the Cup stars. I will pivot and use Rhodes this week.

PARKER KLIGERMAN $9,100: If you want a driver who is going to get the most of his truck Saturday, you want Kligerman in yoru lineup. His No, 75 truck for Henderson Motorsports does not have the funding or speed as the Kyle Busch Motorsports or ThorSports Racing trucks have, but Kligerman has no problem competing with them. He has driven this truck in four races this year with a 10th-place average finishing position. Kligerman has top-10 upside again this week.

KAZ GRALA $8,100: Grala will be behind the wheel of the No. 2 truck for Young’s Motorsports. Grala has driven this truck in three races this year and has not had much success. It could be different on the road course. Grala is one of the best road course racers in the field. He has a 9th-place average finishing position on the road course over the last two seasons. He will have a good chance to finish in the top-10 Saturday “if” his truck does not have mechanical issues.

TYLER ANKRUM $7,800: Ankrum has been hit or miss in DFS this year, but he should be a hit Saturday. Ankrum is one of the underated drivers on the road courses in the Truck Series. He finished 7th, 7th, 3rd, 21st, 6th and 9th his six starts on the road courses. We want drivers with a good chance to finish in the top-12 Saturday. Ankrum is one of those drivers.

MATT CRAFTON $7,700: We know what we are getting with Crafton at Sonoma. He is not going to win the race but he should have a good chance to finish in the top-10. Crafton has finished five of his last 10 road course races in the top-10 and four of them in the top-five. He is a good value pick this week.

AUSTIN DILLON $7,500: Dillon will be behind the wheel of the No. 20 truck for Young’s Motorsports. Dillon is working hard at improving his road course skills and it is working. Dillon finished 12th in the Cup Series race at Sonoma last year. He also drove this truck at the Bristol Dirt Race earlier this year. Dillon started 10th and finished 14th. He should have a good chance to finish in the top-10 this week.

MATT DIBENEDETTO $7,400: DiBenedetto is starting to show some improvement in the Truck Series after a slow start to the season. Now we get to see what he can do at a track where he has more experience than his fellow truckers. DiBenedetto had one of his best races in the Cup Series at Sonoma in 2019. He started 19th and finished fourth. He did not use pit strategy to finish up front. He outdrove most of the field to get his top-five finish. This should be one of the best races for DiBenedetto this year.

DEREK KRAUS $7,200: We want drivers who can finish in the top-12 this week. I am not sure Kraus is one of those drivers but he does have a good chance for a top-15 finish. Kraus started 14th and finished 12th at COTA earlier this season. I will play Kraus and hope he can repeat that perform Saturday.

JADE BUFORD $5,600: Do not overlook Buford this week. He is a good road course driver. His truck sucks (Reaume Brothers Racing), but if it can avoid mechanical issues, Bufford should have a good chance to finish in the top-12 Saturday. He led four laps and finished 14th in the Xfinity Series race at Portland Raceway last week (another road course). I will have some shares of Buford this week. 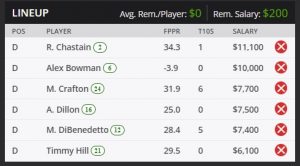 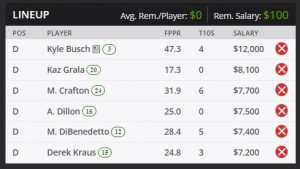 *** The Truck Series competes at Knoxville Raceway in Iowa next week. It is an off week for the Cup and Xfinity Series so I am taking a vacation. I will post the DraftKings article for the Truck Series race Friday but it will be a condensed article. I will list my Driver Rankings and the lineups. I will not have time to write about the Core Drivers for the race. This is my only off week until November so I want to take advantage of it.***