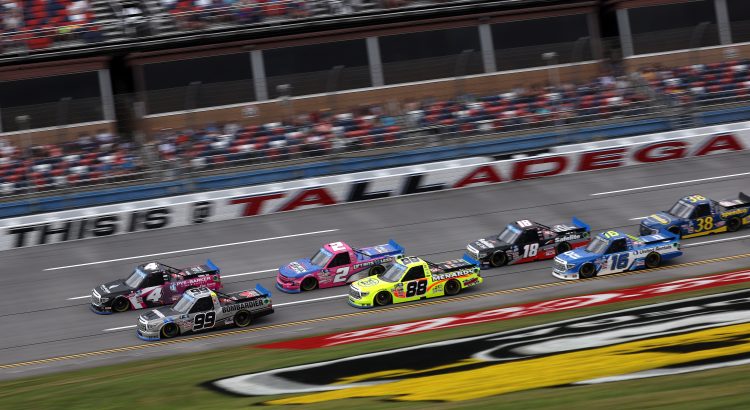 The Truck Series will join the Xfinity and Cup Series at Talladega Superspeedway this weekend. The Talladega 250 will be the second race in the Round of 8 for the truckers. There are only three races left in the Truck Series season so it will be wild as the drivers compete for their spot in the championship four.

NASCAR no longer has a practice session for the races at the Superspeedways. The trucks make one qualifying lap and then lineup up to race. Qualifying is important for the races on the superspeedways because we want to target the drivers who start in the back with the best chance to score place differential points.

There are going to be some wild wrecks that will take out so of the best drivers. The average number of drivers who finished on the lead lap in the last three races at Talladega was 14. The drivers who finish up front typically start in the back. If you look at the top-10 drivers from last year’s race, you will see that scoring place differential points is the winning strategy at Talladega. Here are the drivers finishing position and starting position in this race last year… 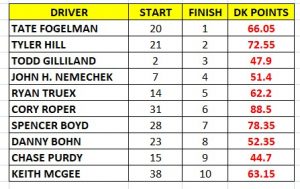 Forget the names above the door. We need the drivers who can score the most points. Last year that was Tate Fogleman, Tyler Hill, Spencer Boyde, Ryan Truex, Cory Roper and Keith McGee. Not exactly the best looking lineup on paper, but it would have won you every tournament you entered.

Do not be afraid to leave a lot of salary on the table this week. It is more important to score the most points than it is to spend all of the salary. 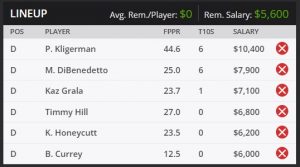 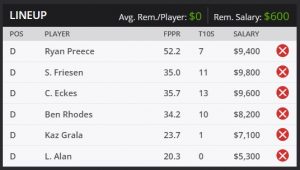