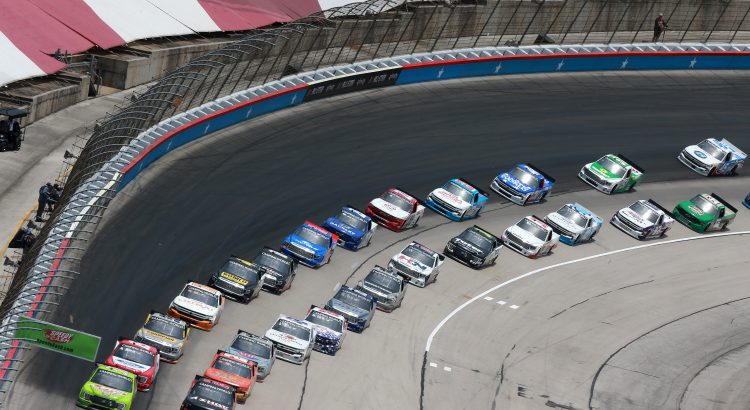 The NASCAR Camping World Truck Series will join the Cup Series and Xfinity Series at Texas Motor Speedway this week. The truckers competed on a 1.5-mile track last week at Kansas. That track is different from Texas because Kansas wears out tires fastest and it has progressive banking. We can learn a lot from the races at Las Vegas and Kansas though to help handicap the race at Texas. I doubt the race Friday night will be as good as the races on the two previous 1.5-mile tracks (Las Vegas and Kansas) but it should be an “OK” way to start the All-Star weekend. The SpeedyCash.com 200 can be seen Friday at 8:30 p.m. ET on FS1.

Here are the practice speeds from Friday’s practice at Texas… 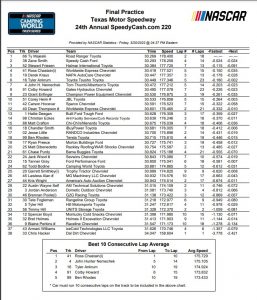 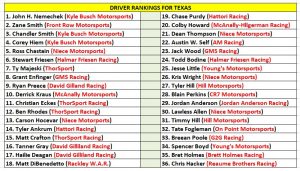 ZANE SMITH $10,600: ThorSport Racing and Kyle Busch Motorsports receive all of the hype in the Truck Series but Smith may be the best driver in his Front Row Motorsports Ford. Smith led 108 laps on his way to Victory Lane last week and he crossed the line in 2nd place at Las Vegas before his truck failed post-race tech. Smith is going to be tough to beat again Friday night.

ROSS CHASTAIN $10,400: Chastain will be behind the wheel of the No. 41 truck for Niece Motorsports. Chastain clearly has more talent than any driver in the field, but the Niece Motorsports trucks have not had the speed to win races this year. Chastain competed in two races in the Truck Series. He finished 23rd at Atlanta and 26th at Darlington. Not good. You can never count out Chastain though, so I will have a few shares of the No. 41 truck Friday night.

BEN RHODES $10,100: Rhodes is another driver who is tough to predict this week. His No. 99 truck for ThorSport Racing has been one of the most consistent in the field. Rhodes has finished 6 of the 8 races this year in the top-10 and led laps in all 6 races. Texas is his worst track though. Rhodes finished 20th in the Lone Star State in 2020 and 26th last year. His truck had speed, but Rhodes had no luck in those races. I will have a few shares of Rhodes simply based on the strength of his team.

CHANDLER SMITH $10,000: John H. Nemechek gets all of the hype at Kyle Busch Motorsports but Smith has been their most consistent driver. He has two wins (Phoenix and Las Vegas) and his 8.6 average finishing position is 2nd best in the Truck Series (behind Zane Smith). Smith won at Las Vegas and he finished 4th at Kansas. Smith should have a good chance to finish in the top-5 Friday night.

GRANT ENFINGER $9,800: Who has been the best driver in the Truck Series over the last two weeks? It would be hard to argue against Enfinger. He finished 3rd two weeks ago at Darlington and he finished 3rd last week at Kansas. He also finished 3rd last year at Texas. I am picking Enfinger to finish 3rd Friday night.

CARSON HOCEVAR $9,400: Hocevar has finished 2 of the last 3 races in 2nd place. He is going to have a lot of value again tonight Hocevar got loose in qualifying and now he will start 20th tonight. He should finish in the top-10 and score 10-15 place differential points.

RYAN PREECE $9,200: Preece will be behind the wheel of the No. 17 truck for Team DGR. This truck will have support from Stewart-Haas Racing. Preece has driven this truck in three races this year and he has had a lot of success. Preece started 5th and finished 4th at Las Vegas, started 11th and finished 7th at Atlanta and started 13th and finished 7th at Darlington. He should be a lock for another top-10 finish Friday night.

COREY HEIM $9,000: Heim will be back behind the wheel of the No. 51 truck for Kyle Busch Motorsports. This young driver has had a lot of speed this year. He reminds me a lot of Brandon Jones in the Xfinity Series. When he finishes the race, he usually finishes in the top-5. The problem is that Heim only finished 2 of his 5 races this year without crashing. He is a high-risk, high-reward driver who can be played in Tournament Contests only this week.

TY MAJEWSKI $8,900: Majewski is the best driver for ThorSport Racing right now and that makes him one of the best drivers in the field. He finished 4th two weeks ago at Darlington and 2nd last week at Kansas. This young driver is starting to make a name for himself in the Truck Series and I want to use him before his price skyrockets.

STEWART FRIESEN $8,500: What do we do with Friesen this week? He finished 3rd at Las Vegas and 14th at Kansas. Friesen has a 10.3 average finishing position in his 8 Truck Series races this year. That is pretty good. He also finished 34th, 28th, 4th and 20th in his last four races at Texas. That is pretty bad. I will use Friesen tonight and hope his success in 2022 continues.

MATT CRAFTON $8,700: Crafton has had a lot of success at Texas and that is an understatement. He has finished 19 of his last 20 race at Texas in the top-10. Crafton finished 7th at Las Vegas and 9th at Kansas this year so he has been good on the 1.5-mile tracks. I doubt Crafton will lead any laps, but he should be a safe pick for a top-10 finish Friday night.

TYLER ANKRUM $8,400: Ankrum looked like trash last week at Kansas but he should rebound at Texas. Ankrum has 5 races at Texas on his resume. He finished 4 of those races in the top-10. His average finishing position at Texas is 7th. Ankrum should be a good value pick Friday night.

MATT DIBENEDETTO $8,000: The Truck Series season has not lived up to expectations for Matty-D. His problems continued Friday in practice. DiBenedetto brought the truck into the pits to make a wedge adjustment. That is considered an “unapproved adjustment” so DiBenedetto was not allowed to qualify. He will start in the back and be a lock for Cash Contests.

DEREK KRAUS $7,800: I will take a chance with Derek “sauer” Kraus this week. He looked really good last week at Kansas and that speed should translate into a good run at Texas. Kraus started 8th and finished 8th in the race. He is a good value play for your lineups Friday night.

TODD BODINE $7,700: Old Man Bodine will be back behind the wheel of the No. 62 truck for Halmar Friesen Racing. This truck should have similar speed as the No. 52 truck that Stewart Friesen will drive Friday night. Bodine competed in two Truck Series races this year. He finished 21st at Las Vegas and 10th at Darlington. He should be a good value pick who can finish between 10th and 15th Friday night.

CHASE PURDY $7,300: I will take a few chances with Purdy this week. He has been pretty good on the 1.5-mile tracks. Purdy started 19th and finished 14th at Las Vegas and he started 14th and finished 13th last week at Kansas. I doubt Purdy will finish in the top-10 but he should have a good chance for a top-15 finish Friday night.

HAILIE DEEGAN $6,600: Deegan has had a horrible start to her second season in the Truck Series, but she is starting to show some improvement. She started 18th and finished 17th last week at Kansas. Deegan told the pit reporter before he qualifying lap, “This is the best truck I have ever had in the Truck Series.” She was 13th fastest in practice. I will take a chance with her for $6,600.

TYLER HILL $5,000: Hill was one of the best “punt plays” in the DraftKings contests last week. Hill started 33rd and finished 21st, scoring 12 place differential points. Hill starts 30th tonight and should have a good chance to finish inside the top-25 again. 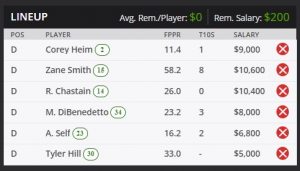 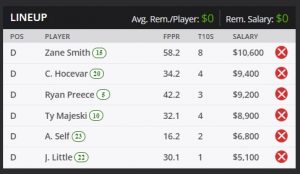