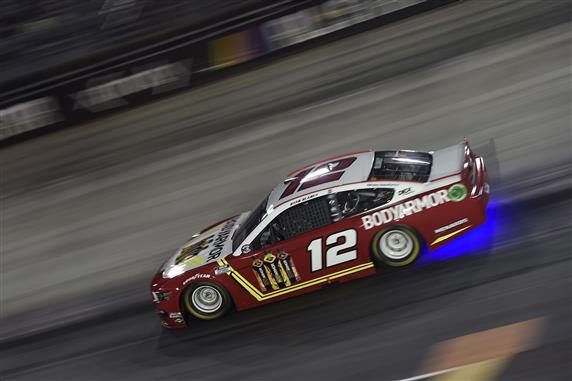 The NASCAR Cup Series playoffs are flying bye. We have already reached the final race of round one of the Cup Series Playoffs. Bristol is a tough track for the drivers who are in a “must win” situation. The races in Thunder Valley usually have some chaos before the checkered flag is waived, but this race could be worse since there is so much on the line. It should be fun to watch. The Bass Pro Shop Night Race can be seen Saturday at 7:30 p.m. ET on NBCSN.

Bristol: Food City 500 (2020): The Cup Series competed at Bristol in late May and then they came back for the All-Star Race in July. That is 640 laps of racing on this high-banked, short track to help us prepare for Saturday nights race.

The All-Star race was the Ryan Blaney and Chase Elliott show. Blaney started up front and led 72 of the 140 laps. Elliott started in the middle of the field and it took the No. 9 car a while to make it to the front. Once Elliott got the lead, the race was over. He led 60 laps and took home the $1M prize. Kyle Busch did his best to run down Elliott, but the No. 18 car did not have the speed to keep up. Elliott had the best car in both races at Bristol this season.

Here are my picks for the Bass Pro Shop Night Race …

Chase Elliott (Start): Chase Elliott has been the best driver at Bristol this season. He should have won the last race at the track. Elliott led 88 laps, won both Stages and was leading with four laps to go. The No. 9 and No. 22 car got into each other and both cars hit the wall. Elliott came back for the All-Star race and got his revenge. He led 88 laps and went to Victory Lane. The No. 9 car should have a good chance to win the night race Saturday.

Brad Keselowski (Bench): Brad Keselowski has been the best drive the last two seasons on the short tracks, but Chase Elliott has been slightly better at Bristol. Keselowski was handed the win at Bristol when Elliott and Joey Logano wrecked each other. Keselowski finished 1st and 3rd in his last two races at Bristol. I expect another top-five finish from the No. 2 car Saturday.

Ryan Blaney (Start): The All-Star Race came down to a battle between Chase Elliott and Ryan Blaney and I think the same could happen Saturday night. I only have two allocations left with Blaney and I want to use them while he is still in the playoffs and racing at one of his best tracks. Blaney led over 100 laps in both races at Bristol in 2018 when this aero package was used. This is a good race to use the No. 12 car.

Austin Dillon (Start): Do you believe in momentum? If you do, Austin Dillon is your driver Saturday night. He finished 2nd at Darlington and 4th at Richmond to put the No. 3 car 6th in the playoff standings. Dillon will be points racing Saturday night to ensure he advances in the playoffs. That means a lot of fantasy points for our team if he can get the job done. I will play the hot hand and use another allocation with Dillon this week. (He finished 6th at Bristol in May)

Clint Bowyer (Bench): Clint Bowyer is a hard driver to trust in Fantasy NASCAR but Bristol is his best track. He finished 2nd, 7th, 7th, 6th and 8th in his last five races in Thunder Valley. Bowyer has a series-best average finishing position (7.29) in the last two years at Bristol. The No. 14 car needs points so Bowyer should be using every strategy possible to run in the top 10 Saturday night.

Jimmie Johnson (Bench): Jimmie Johnson has been good at Bristol even when he was in his slump. Johnson has an 8th-place average finishing position in his last seven races at Bristol. That is second-best behind Clint Bowyer. Johnson started 24th and finished 3rd in the last race at Bristol. He is a good pick if you are out of allocations with the drivers listed above.

Christopher Bell (Start): Christopher Bell was awesome at Bristol in the Xfinity Series and he was pretty good in his Cup car in the last race at Bristol. Bell had to start deep in the field because of his slow start to the season. Bell had no problem going from his 35th starting position to the top 10. Bell had one of his best races of the season with his 9th place finish. I am hoping he can repeat that performance Saturday night.

Bubba Wallace (Bench): If you are low on allocations with Christopher Bell, Bubba Wallace is a good option. Wallace is not the first name you think of when it comes to racing at Bristol, but he has been pretty good. Wallace started 22nd and finished 14th at Bristol last year. He came back this season and had to start 36th. Wallace made his way through the field and finished 10th. He is good at this track so it is a good idea to use Wallace in fantasy this week.