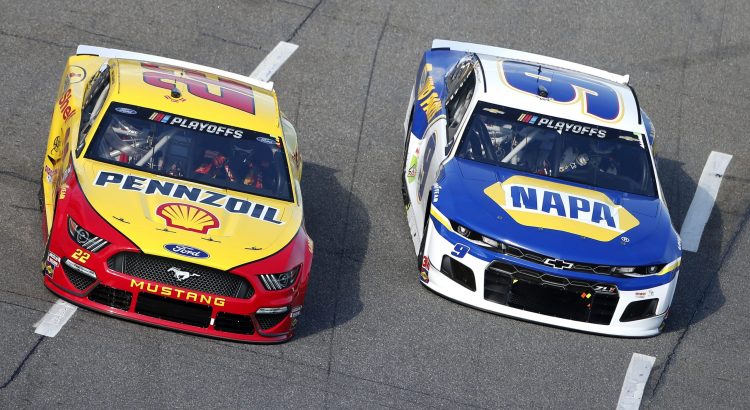 The NASCAR Cup Series will compete under the lights at Martinsville Speedway Saturday night. NASCAR has promoted this season as “The Best Season Ever.” My Driver Group Game picks would disagree. The drivers in my lineups have had a lot of speed, but they also have a lot of bad luck. Christopher Bell looked like the fastest car at Bristol but he was sent into the wall. Kurt Busch looked like a lock for a top-five finish at Atlanta but was taken out on a restart. I am pulling out all of the tricks to over-turn this curse that is on my picks right now.

Group A Pick: Martin Truex Jr. should be the best pick in Group A Saturday night. He won the race at Martinsville in October of 2019 and came back and smoked the field again last June. Truex should have made it three wins in a row at Martinsville but he had a tire go down while leading the race with 64 laps left last November. Truex is averaging 241 laps led and 14 Stage points in his last three trips to Martinsville. It should not take the No. 19 car long to get to the front and start dominating the race.

Other Good Picks include: Track position is more important at Martinsville than any track on the circuit. Joey Logano starts from the pole and will have the No. 1 pit stall. His pit crew ranks No. 1 this season in positions gained on green-flag pit stops. That should really pay off Saturday night. Logano finished 3rd and 4th in the two races at Martinsville last year. He also averaged 126 laps led and 14 Stage points at the track last year. Logano would be a good pivot from Martin Truex Jr. this week.

* Chase Elliott won the last race at Martinsville and he should be a threat to win again Saturday night. I am saving Elliott for the road courses and some of the other short tracks.

Group B Pick: I wanted one of the Busch Brothers in my lineup Saturday night and it was tough picking between them. Kurt Busch has been more consistent at Martinsville (finished 5th, 9th and 6th in his last three races) but he is in a slump right now. Kyle Busch has had a lot of success at Martinsville in his career but has had bad luck at the end of each races. I decided to roll the dice with Kyle since his brother starts so deep in the field. (Kyle) Busch has two wins, 16 finishes in the top-five and has led 1,429 laps at Martinsville. The No. 18 car will be fast and Busch will run most of the race in the top-10. He should score a lot of Stage points. He just needs to keep his emotions under control. That is easier said than done for him at Martinsville.

Group B Pick: William Byron was not on my radar for this race but he should be a good pick Saturday night. Byron starts 3rd and his pit crew ranks fourth-fastest this season. Byron finished 2nd at Martinsville in 2019 and 8th last year. He knows his way around this tricky track and Byron has a lot of momentum right now (Byron has finished his last five races in the top-eight). I like what Hendrick Motorsports has going on right now so I will use an allocation with Byron Saturday night.

Other Good Picks: Alex Bowman should join his Hendrick Motorsports teammates at the front of the field Saturday night. Bowman was really good at Martinsville last year. He finished 6th in the June race and came back in November and finished 6th again. Bowman starts deep in the field so he will have to work his magic to get to the front, but this race is 500 laps long. That should be plenty of time to get to the front.

Allocation Save: Ryan Newman is the toughest driver in NASCAR to pass and Martinsville is the toughest track to pass other drivers. That is a combination that should favor the No. 6 team Saturday night. Newman starts 8th and he should be able to run most of the race in the top 10, score a lot of Stage points and be a good pick to allow you to save an allocation with your top drivers from Group B.

Group C Pick: The biggest surprise of the 2021 season has been Daniel Suarez and his new Trackhouse Racing team. I did not expect the No. 99 car to be so fast this season. Their cars are built in the Richard Childress Racing garage and have the same setup as the other RCR cars. Suarez had success at Martinsville while racing for Stewart-Haas Racing (he finished 10th in 2019) and at Joe Gibbs Racing (He finished 9th in 2018) and I expect he will run in the top 10 again this week.

Other Good Picks: Bubba Wallace was the driver I had penciled into this position before the season started. Wallace looked good in this race last year. He started 23rd, finished 5th in Stage 1, 6th in Stage 2 and finished 11th in the race. He will have all of the resources to run well Saturday night but Wallace hasn’t finished inside the top-15 yet this season. I will wait until his new team gets some momentum before I use Wallace in my lineup.