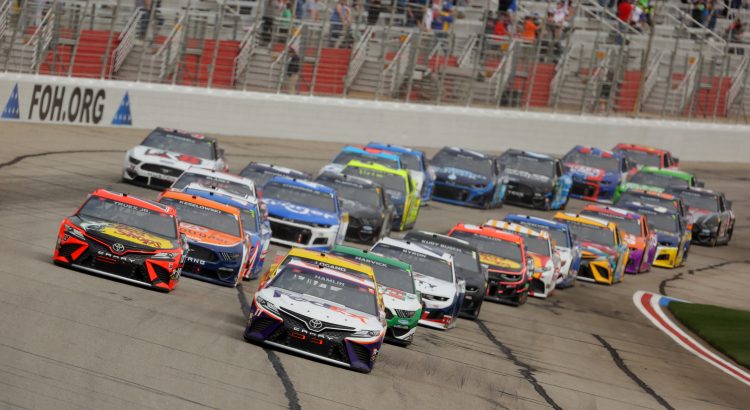 The NASCAR Cup Series will return to Atlanta Motor Speedway Sunday. This will be the first time the Gen-7 car has returned to a track. You would think we would have a lot of data to use to prepare our teams this week but the race at Atlanta will only be the third race using the Superspeedway aero package (510 HP engines and 7” splitter). It also does not help that the teams did not have a practice or qualifying session for the race. This is going to be an unpredictable race, but that is nothing new for the Cup Series. All of the races have been tough to handicap. The Quaker State 400 can be seen Sunday at 3 p.m. ET on USA Network. (The next three races will be on USA)

The Cup Series has reached the half-way point of their season and that means there are only eight races left in the Fantasy Live regular season. Two of the remaining races are on road courses. We can use drivers like Chris Buescher, Austin Cindric, AJ Allmendinger and Michael McDowell to save allocations at the road courses. One of the races is at Daytona and we can use just about any driver in that race. That means we only need our top drivers five races (we probably could get through Pocono too without the top drivers). I plan to simply use my top drivers this week and save some allocations later.

Here are my picks for the Quaker State 400… 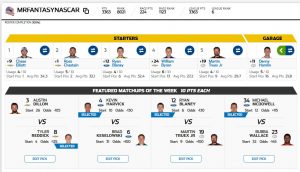 CHASE ELLIOTT (4): Elliott has a lot of momentum after his win in Nashville and his second-place finish last week at Road America. Elliott had one of the best cars at Atlanta in March. The No. 9 car had the third-best average running position in the race (8.81) and the second-best driver rating (108.1). Elliott is running better now than he was earlier in the season. He should have a good chance to score a lot of Stage Points and finish in the top-five from the pole position this week.

ROSS CHASTAIN (5): I plan to have Chastain in my lineup every week until I run out of allocations with him. He has been the most consistent driver in the Cup Series and he highest-scoring driver in Fantasy Live. I know I do not need Chastain at Daytona so that leaves five allocations for seven races. The No. 1 car finished second at Atlanta in March. There is no reason to believe Chastain will not be up front again Sunday from the second starting position.

RYAN BLANEY (4): Could this be the week when Blaney wins his first race of the season? It is hard to believe the No. 12 car has not been to Victory Lane yet.  Blaney is the best driver in the Cup Series on the Superspeedways (Denny Hamlin has too many penalties, so now the crown goes to Blaney). The No. 12 car had the second-best average running position (8.11) and the third-best driver rating (105.4) at Atlanta in March. Blaney should have a good chance to win Sunday.

WILLIAM BYRON (6): Byron completely destroyed the field in the first race at Atlanta. He led a race-high 111 laps, had the best driver rating (134.9), scored 11 Stage Points and won the race. Byron only has one finish in the top-10 in his last 10 races (Sonoma), but it is hard to ignore what he did at Atlanta in March. I have plenty of allocations left with Byron so I will take a chance and see if he can repeat what he did at Atlanta in March.

MARTIN TRUEX JR. (4): Harrison Burton was in diapers the last time Truex finished outside the top-10 at Atlanta. OK, maybe it has not been that long but Truex has finished nine consecutive races at Atlanta in the top-10. That includes an eighth-place finish in March. I have four allocations left with Truex and only four tracks I want to use him at. I will take a chance with the No. 19 car Sunday.

GARAGE DRIVER: DENNY HAMLIN (5): Hamlin had a typical Hamlin type race at Atlanta in March. The No. 11 car had the fastest car in practice and was running in third-place when Kyle Larson got loose and sent Hamlin into the wall. Hamlin is one of the best Superspeedway drivers. If the No. 11 team brings the same speed to the track that they had in March, Hamlin should score well for your Fantasy Live team. I will have Hamlin in the Garage as an insurance policy at Atlanta.