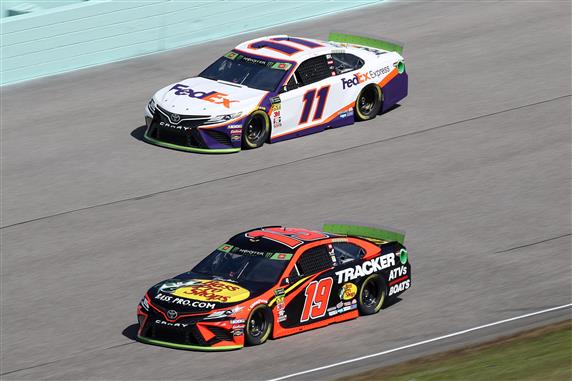 The NASCAR Cup Series will travel to southern Florida this week to compete in the heat at Homestead Miami Speedway. This race will be the first with fans. 1,000 military members will be allowed to attend the race. It is not a lot, but it is a start. Let’s just hope that we can see more fans at the track before the end of the summer. The Dixie Vodka 400 can be seen Sunday at 3:30 p.m. ET on Fox.

The Fantasy Live picks were series trouble at the beginning of the race at Martinsville. Martin Truex Jr., Denny Hamlin, Kyle Busch, Brad Keselowski and Ryan Blaney all had problems. The teams worked hard and Truex, Keselowski and Blaney were able to rebound and finish in the top five. That saved the lineup, but Kyle Busch and Clint Bowyer’s poor finishes dropped the picks to 895th overall. They are still beating 99.7% of the competition, so nothing to complain about.

Here are my picks for the Homestead….

Martin Trux Jr.: There really is no need to look any further than Martin Truex Jr. for your Group A driver Sunday. He has finished 1st, 2nd and 2nd in his last three races at Homestead. Truex has also averaged 67 laps led and scored Stage top-five points in every Stage. The Joe Gibbs Racing cars came to life at Atlanta and I expect their team to run up front in this race.

Kevin Harvick: If Martin Truex Jr. is not dominating this race, it should be Kevin Harvick leading all of the laps and going to Victory Lane. Harvick leads the series in average finishing position (5.5) and laps led (542) on the intermediate tracks this season. He also has wins at Darlington and Atlanta. Now Harvick gets to compete at a track where he has finished 4th, 3rd, 4th, 3rd, 2nd and 1st at since he joined Stewart-Haas Racing. The No. 4 car is the safest pick in the field for this race.

Kyle Busch: Kyle Busch is no stranger to Victory Lane at Homestead. He has won two of the last five races at the track, including the race last Novemeber. He has also led laps in five consecutive races at the track. Busch is almost as consistent at Kevin Harvick at this track. Busch finished 1st, 4th, 2nd, 6th and 1st in his last five races at Homestead. Busch is also coming off second-place finishes at Atlanta and Darlington. Busch should finish in the top five Sunday.

Denny Hamlin: I wasn’t planning on using Denny Hamlin for this race but I was able to save an allocation with the No. 11 car because I put him in the Garage and he won the pole for the race Sunday. He is no stranger to starting on the pole at Homestead. Hamlin has started first in 4 of the last 5 races at this track. His average finishing position in those races is 9.8. Hamlin should finish in the top 10 again Sunday.

Jimmie Johnson: Speed has not been a problem for the No. 48 team this season. Jimmie Johnson has been fast at every track. He finished 5th at Las Vegas, 8th at Darlington, 11th and should have been 2nd at Charlotte (He was DQ’d for being too low) and 7th at Atlanta. Johnson ran well at Homestead last year. What I really liked about his run in 2019 is that his car was the best on the track in the sun but went to the tight side under the light. It will be hot for the entire race Sunday so if they bring the same setup, Johnson should be lightning fast.

Clint Bowyer: Clint Bowyer has a group of tracks where he runs well and Homestead is one of them. Bowyer has finished 6th, 8th and 12th at Homestead since joining Stewart-Haas Racing. He has also finished 10 of his last 12 races at this track in the top 12. That is ridiculously consistent. I will have Bowyer in the Garage and hope he can avoid making mistakes.