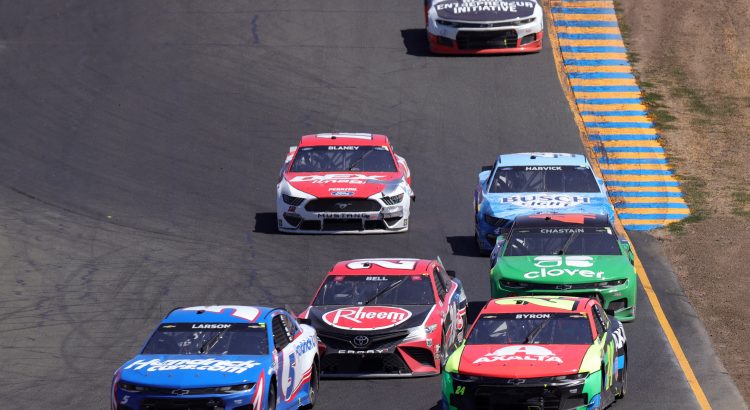 The NASCAR Cup Series will travel back to the west coast to compete on the second of the six road courses on the 2022 schedule. Sonoma Raceway is the most technical of the road course tracks and pit strategy always comes into play at this track. The Gen-7 car, with its independent rear suspension was built to perform well on tracks like Sonoma so this should be a good race. The Toyota / Save Mart 350 can be seen Sunday at 4 p.m. ET on FS1.

There are only five drivers in the field who have won at Sonoma (Martin Truex Jr., Kevin Harvick, Kyle Busch, Kyle Larson and Kurt Busch). This is a tough track, so we always see the same drivers in the front of the field in Northern California. We often see surprises in Victory Lane at the Rovals, but that will not be the case Sunday. Be sure to use the drivers with a history of running well at Sonoma in your lineups. Track history is more important at this track than just about any other track on the schedule. 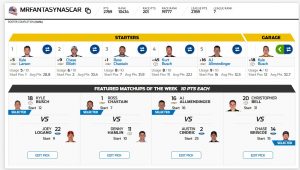 KYLE LARSON (5): KYLE LARSON totally dominated the race at Sonoma last year and he has the speed to do it again. Larson won both Stages and the race at his home track last year. Now he had the fastest car in practice, won the pole and has the No. 1 pit stall. I was hoping I did not have to use Larson this week but he has the car to beat Sunday. I cannot fade him.

CHASE ELLIOTT (6): Elliott has won four of the last 10 road course races and has averaged 31 laps led per race at Sonoma. The No. 9 car should spend a lot of time up front, scoring Stage Points with a good chance to win Sunday. I have been saving my allocations with Elliott for the road courses so I will use one of them Sunday.

ROSS CHASTAIN (8): Chastain is one of the underrated drivers on the road courses. He won the race at COTA earlier this year and he finished seventh at Sonoma last year. Chastain had some extra track time since he competed in the Truck Series race Saturday. Chastain posted the third fastest speed in practice and he starts seventh in the race. The No. 1 car should score a lot of Stage Points and finish in the top-10 Sunday.

KURT BUSCH (8): Busch has been on a hot streak over the last month. He won at Kansas last month and finished 3rd last week at WWT Raceway. Now Busch gets to compete at Sonoma. He has finished five of the last six races at this track in the top-10. That includes a sixth-place finish last year. His 23X1 Racing car, built by Joe Gibbs Racing, will have more speed than what he had last year with Chip Ganassi Racing. Busch was sixth-fastest in practice and he starts right outside the top-10. Busch has a great chance to finish in the top-10 again at Sonoma.

AJ ALLMENDINGER (9): Allmendinger is running a limited schedule for Kaulig Racing this year. He is scheduled to be behind the wheel of the No. 16 car at all seven road course races. I plan to use my allocations with Allmendinger in those races and save my top drivers for other tracks. Allmendinger is going to run up front and score a lot of Stage Points. The only question is… can he keep from breaking his car? Engine and transmission failures happen too often with Allmendinger. The risk is worth the reward though since we can replace him with Kyle Busch if we need to.

GARAGE DRIVER: KYLE BUSCH (4): There are a lot of reasons to like Rowdy this week. He has been on fire for the last month with finishes of 2nd, 2nd and 3rd in his last three races. Now he gets to work on his skills at Sonoma in the Truck Series race Saturday. Busch is always better in his Cup Series car when he competes in a lower-level series race. Busch has finished four consecutive races at Sonoma in the top-five. I am running low with my allocations with Busch so I will start him in the Garage and hope the other drivers in my lineup run as well as I think they will.