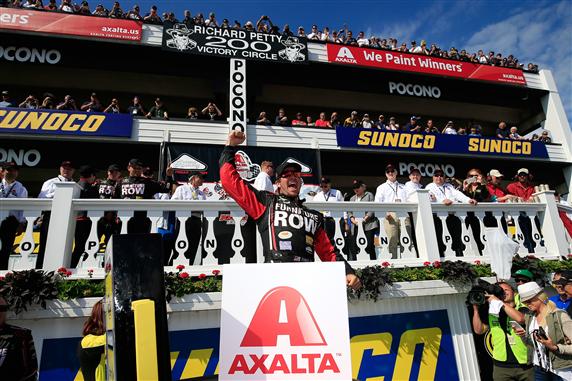 The Monster Energy NASCAR Cup Series travels to Long Pond, Pennsylvania this week for the Pocono 400. The race can be seen Sunday at 3 p.m. ET on Fox Sports 1. Be sure to test your knowledge of NASCAR by competing in the Fantasy Live game on nascar.com.

The last two weeks were high scoring races in Fantasy Live because there were 400 laps in each race. This week there will only be 160 laps and 160 points available for leading laps and fastest laps in the race. It will be important to only take two drivers who start upfront and three drivers for position differential points at Pocono.

Martin Truex Jr. ($28.00) has been the best driver this season and that should not change Sunday. The No. 78 car has had limited success at Pocono but when he is good, he is really good. Truex led 97 of the 160 laps in 2015. I would not be surprised if he had similar results this week. Truex is a driver to keep your eye on in practice.

Kyle Larson ($27.50) has been just as good, if not better than Martin Truex Jr. this season. Both of these drivers have been fast at every track. Larson has been more consistent at Pocono than Truex. Larson has an average finishing position of 8.85 in his six races at the track. The No. 42 car is a good place to start building your team this week.

Brad Keselowski ($27.25) will be one of the favorites to win Sunday. If this race comes down to fuel millage (like it usually does); Keselowski’s odds of winning will increase. Team Penske Racing does the best job at saving fuel and winning races. Keselowski has finished the last three races at Pocono in the top three. He has some bad luck lately, but that should change this week.

Jimmie Johnson ($27.00) has three wins at Pocono but his last win came eight races ago in 2013. Johnson has not run well at Pocono because he has not had to. Pocono is not one of the tracks in the playoffs and Johnson always had a spot in the playoffs secured before the first Pocono race. This year Johnson will need to score Stage points for the playoffs so the No. 48 team will put a lot more emphasis on this race. Do not be surprised to see Johnson win back-to-back races this week.

Matt Kenseth ($24.75) has been very good at Pocono and he is running very well right now. Kenseth has the second-best driver ranking and the third-best average finishing position in the last four races at Pocono. Kenseth would be a good third driver for your team this week. His price is cheap enough to allow you to spend up on your fourth driver.

Ryan Blaney ($19.75) will have the horsepower to run up front this week. The Wood Brothers have consistently brought fast cars to the race track. Since the cars drag-race down the 3,740 feet backstretch and the 3,055 front stretch, Blaney should be able to pass many cars. He should qualify up front Friday and stay up front in the race Sunday.

Chris Buescher ($10.75) won at Pocono last year but he did not dominate the race. Buescher was in the right place at the right time when the rain came last year. The fact that he was able to put his car in a position to win is impressive. Buescher has been running very well the last month. He should finish inside the top 20 Sunday.

Michael McDowell ($10.00) is another driver that has been running well. He has finished the last three races in the top 20. McDowell will be a must own driver if the No. 95 car qualifies outside the top 25 Friday. He is very good at improving his position in the race.

Bubba Wallace Jr. ($5.00) will be making his Monster Energy NASCAR Cup Series debut Sunday. Wallace will be driving the No. 43 car until Aric Almirola is able to come back. Wallace has more value than Regan Smith and Almirola because of his cheaper price. I do not expect much from Wallace this week but if he qualifies outside the top 25 he will be a good choice. He should finish between positions 20-25 this week.

Here are my pre-qualifying picks for the Pocono 400: