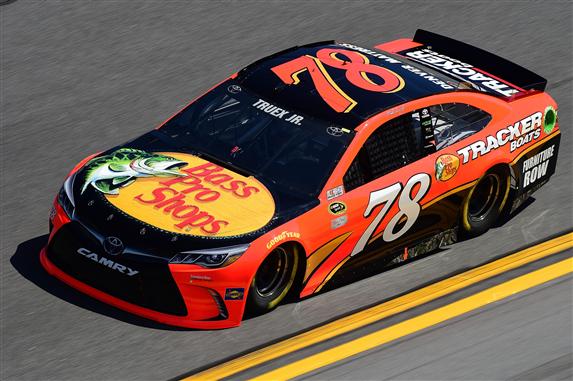 2018 Preview: A lot of the Fantasy NASCAR experts will try to be cute and pick another driver to be at the top of their Fantasy NASCAR Driver Rankings. I am not going down that road. Martin Truex Jr. has been the best driver on the track the last two seasons and I see no reason for that to change in 2018. I expect the Toyotas to have the advantage this season until the Chevy teams figure out the new Camaro chassis.

Furniture Row Racing will scale back from a two car team, to a single-car team in 2018. I found it interesting that the team decided to keep most of the employees who worked on the No. 77 car last year. These employees will be added to the No. 78 team and that should make this team even better this year.

I tried to find a reason to lower Truex in my rankings but I could not find one. This team has no weakness.

No driver in the field is as good at the Intermediate tracks (1.5-mile and 2-mile ovals) as Martin Truex Jr. He ranked No. 1 in fantasy value at these tracks last year and won 7 of the races. His average running position was 4.1 and his average finishing position was an outstand 2.8. Truex will be the best choice for your fantasy team at these tracks. He must be on your team in DraftKings and Fantasy Live because he is so good at leading laps and finishing up front. He is almost unbeatable at Chicago and Charlotte. Make sure he is in your lineup at those tracks (but not the Roval at Charlotte).

The Superspeedways (Daytona and Talladega) are the only two tracks were I would consider fading Martin Truex Jr. He ranked 19th in fantasy value at these tracks in 2017. The No. 78 car is really good at the Superspeedways but Truex usually qualifies too far forward and his price is too high. Truex must be faded at Talladega. He has four consecutive finishes at that track outside the top 20. He can be used in the Daytona 500 in DraftKings and Fantasy Live ONLY if he has problems in the qualifying races and starts in the back (like he did last year). Truex must be able to score position differential points to justify paying his high price.

Martin Truex Jr. is good but not great at the Flat tracks (Phoenix, Richmond, Martinsville and Loudon). Truex ranked 4th in fantasy value at these tracks in 2017. He has never won at any of these tracks but he came close last year. Truex finished third at Loudon, third at Phoenix and second at Martinsville. The No. 78 team is improving each season at these tracks. I would not be surprised to see Truex finally win one of these races. My pick would be Loudon. That is the Flat track where he is the most consistent at.

Martin Truex Jr. is one of the best drivers at the Steep tracks (Bristol, Dover and Darlington). The New Jersey native considers Dover his home track. He has really learned to conquer the Monster Mile the last two seasons. Truex has one win, a 2.6 average finishing position and led 340 laps in the last three races at Dover. He must be on all teams at Dover.

Truex is also very good at Darlington. He has finished in the top 10 in the last three races at the Track Too Tough To Tame, including a trip to Victory Lane in 2016. Truex should be at the top of your list of drivers at this track.

Make sure you fade Truex at Bristol. This is his worst track. Since joining Furniture Row Racing, Truex has a 22.3 average finishing position at Bristol. There are much better tracks to use the No. 78 car.

Martin Truex Jr. is not the first name that comes to mind at the Road Courses (Sonoma and Watkins Glen) be it should be. Truex won the race at Watkins Glen last year. He was leading the race at Sonoma when he had engine failure. Each year Truex gets better and better at these tracks. I would not be surprised to see the No. 78 car in Victory Lane at one of the Road Courses in 2018.